Here is a review of the Fića from 1971 - a good way to see the perspectives people had back when it was new. 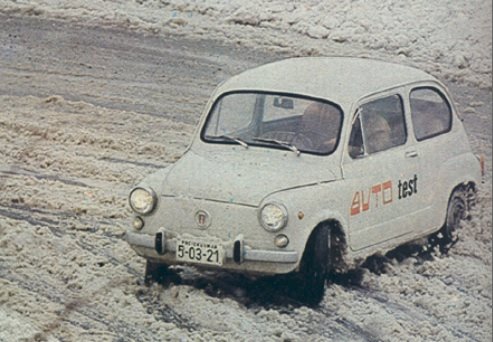 It is the way it is: we all look at it with our noses up high, we try to reject it, but regardless the Fića is celebrating its sixteenth birthday. What was once the Fiat 600 and now the Zastava 750 has retained that magical attraction which lures buyers. So what does all that mean? It means keeping a steady hand when it comes time to take out your wallet.

It's still the cheapest car (besides the Trabant) in dealerships, in insurance offices, and in service bays. If some spoiled young woman were to slam its door out of protest, one can only keep cool: unsatisfied and snobby candidates are not worth getting oneself into a fit, because in the end, she was just dissatisfied with the car...

We already tested a 750 three years ago – it was our first "supertest". Since then, the car has undergone more than 200 changes: the doors have been reversed, the fuel tank changed position, the door key now opens the engine cover as well, and the steering wheel now locks, among other things. Before we started this test, we also considered readers of the fairer sex (and all others who merit comfort more than anything technical): they can rest assured, the fully-loaded Zastava 750 Luxe has a much higher level of equipment than any standard Fića.

Improvements Worth Mentioning
The interior is where the Luxe trim level's merits are most obvious. The dashboard is covered in black plastic and offers the driver a boxy instrument panel with familiar instruments, as well as a practical grab handle for the passenger. The black color is much more eye-pleasing than the metal of Fićas past. The seat material and padding is thicker, thus more comfortable than before, and the door trim is quite soft and is complete with integrated armrests. On the floor between the seats lies an ashtray for the rear-seat passengers as well as an additional cubby.

The handbrake and seat adjustment levers are quite light; however, the opposite can be said for the storage shelf under the dashboard, which is also quite close to the driver's knees. There is another storage shelf located behind the rear seats. The exterior trim is equipment unique to the Luxe: the chrome wheelcovers, the chrome trim above the doors, the rubber inserts on the front bumper guards, and the more attractive front emblem. The siren has moved, now shielded from the elements. Under the hood and in the undercarriage, there are no changes.

When I was faced with the task of squeezing my 190cm frame into such a small space, the seat adjustment handle quickly calmed my fears. I pulled the handle and the seat slid back almost to the back seat, giving about as much space as in a Ferrari. After that, the large, thin steering wheel proved much less of a problem. However, be careful if you drive a Fića with wide-sole shoes on: between the large front wheel wells is a very small amount of space. An automatic transmission would be best so that the driver could just tuck his other leg under the seat.

Whoever wants to spend their weekend sans mother-in-law just needs to put her in the back seat. If the front seat that does not fully fold forward doesn't already put her off, then her enthusiasm about the oncoming trip will surely be ruined when she must squeeze through the door into the back. The Fića is a car for two, then, and for that reason the rear seat folds down, giving 700 liters of cargo-carrying volume – at the expense of rearward visibility.

Passengers will enjoy the car's heating, but not the bad cooling, which consists of a window; heavy breathing makes the windows fog up, and the shape of the windows is as old as the Fića itself. Because of the turned-around doors – it's been three years since Yugoslavia got doors that open with the flow of traffic – it's no different but it's less dangerous. An ongoing complaint is that the place for the rear license plate is made for the shape of Italian plates, which is completely incompatible with ours. Our test car was also born with a peculiar demon: it's hood had a mind of it's own and opened whenever it liked, particularly during driving.

Tried and Tested
The Fića's engine is an eternal youngster. It has 3,720 parts, and is one of the few that are that small yet have four valves per cylinder and water cooling. The maximum output of twenty-five horsepower is achieved at 4,600 RPM, but one would gladly spin it a few revs more. Because of its very low fuel consumption (3l/100km), the car can go for very long at top speed.

However, it is understandable that the amount of power available is too modest to propel the car at such a speed on steep upgrades or when it's fully laden. In such situations, the car's elasticity, which entertains the driver on flat surfaces, disappears right away. The engine likes it most when the driver doesn't ask too much of it; easy driving will extend its life, just as it will reduce the amount of oil and gas consumed. As they say: the more attractive the passenger's legs, the more power the Fića has. And if the girl stays in the car, passing becomes even more pleasant.

The chassis still deserves compliments even three years later. The basic undercarriage and well-distributed weight makes the Fića difficult to roll over. Despite already showing their age, the car's underpinnings are shrouded with good craftsmanship and quality; because of reduced spring oscillation, the rear wheels no longer lean inwards when the car is not laden. We drove through harsh winter conditions with summer tires on the car without a problem.

The leaf spring, which is mounted across between the front tires, is a good solution: it causes no problems during driving. Also, the Fića is very nimble in city bottlenecks – the rear-wheel drive helps here. The stiffer suspension of the 750 Luxe contributes highly to the feeling of stability and keeps the car from sagging.

Hardly in Need of Replacement
Going through the usual curves and turns, the Fića is almost indifferent, but challenge it with a sharper bend or a strong crosswind and you will have to fight for the wheel. The Fića shows that it was made during a time when safety wasn't the highest priority. The thin and hollow nose, the delicate roof, and the fuel tank that's almost in the driver's arms are all rather bad news for the driver and passengers.


* * *
The price has grown but the Fića has not: nevertheless, its small size and simplicity have kept it among the living. It has become a real city car by all definitions. Despite that Torino has already given up on it, it still represents the start of a buyer's driving career here. For the rich, it raises their status, being the second four-wheeler in the house – instead of a bicycle.