Much ado about turn signals

In the video posted some time ago featuring all the parts that are yet to be mounted, one of the more noticeable parts are a pair of round turn signals with black frames. In the first pics I posted of my Fića on the old owner's yard, it is evident that it then had that same type of turn signal.

So what's so odd about this then? And how can turn signals at all be any interesting, for that matter? Well, read on to find out.

Fićas made in the eighties had these same black-rimmed turn signals; I wasn't so sure that mine exited the factory with them. I decided to investigate, and I found an assortment of photos of Fićas of very similar vintage to mine. One of those was this Fića to the right.

Ergo, my Fića should have turn signals with aluminum frames – just like the ones under the headlights in this photo – and not the black ones it was bought with. All I needed to do was to find such turn signals, get them over to the restorer, and tell him to put those on the car instead of the black ones.

How hard can that be?

Before I managed to find any, I informed the restorer of the impending change of plans. He told me that in order to mount the aluminum ones that I wanted, he would have to drill extra holes and it wouldn't be original anymore. How could the aluminum ones that were so clearly the factory-mounted examples now not be the correct ones? Nothing made sense until he mentioned that Fićas of the same vintage as mine never had aluminum turn signals with white lenses. 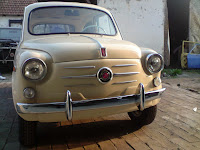 Then it dawned on me: he thought I wanted to put on turn signals like these in the photo to the right. These are the notorious aluminum turn signals with white lenses, which go on a much older type of Fića.

To be safe, I decided to resort to plan B: contacting the boss via the internet.

As I prepared my evidence, I noticed something else: all of the Fićas I found had not only the aforementioned aluminum signals, but extra ones on the side as well, like in the picture below.

I consulted the knowledgeable, and they all came to the same conclusion: my car should have both the aluminum turn signals and the smaller side-mounted ones.

I presented the boss with my evidence. He quickly agreed with my findings and said both will be mounted on my car without a problem.