(Traffic? What traffic?)
Usually one tries to avoid rush hour at all costs, even when one plans to be in it. We pointed the car in a generally southbound direction sometime after five o'clock in the afternoon.

Now, it may seem like the two above statements are in complete contradiction, but I assure you, there is some sense to be had.

We were headed towards the border crossing in Aldergrove from Vancouver, in other words, against the flow of traffic. So while those headed in the opposite direction were not moving, our side of the concrete barriers was busy eating up the vast spaces between cars as fast as was possible legally permissible.

The border crossing continued the trend, as we barely had to stop until we had the customary chat with the border guard and his obligatory mustache. And even that didn't last long. 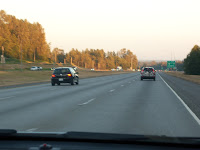 The last time we were close to the location in the title picture, nothing was moving. As you can see, this time, things were different.

Later on, a state patrolman snaked his way silently through the (technically-speaking) traffic. Surely he was going after somebody. When he eventually stopped, there was no stolen cars or horrible accidents, but a stray dog who was trying to cross the freeway.

They sent the WSP to pick him up instead of letting him gamble his fate with an oncoming Super Duty pickup.

Every so often, there were more WSP men who had pulled over speeders (most were from BC I might add). Seems like here, the police are actually doing their job. And with good reason, seeing as only drivers from BC break the generous speed limit and speed up even more when you turn on your turn signal. 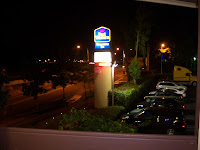 Oddly, it was only when the clock began to approach midnight that traffic got a bit more existent. I suppose that everyone leaves at night in order to avoid traffic...