(Coitus Tower)
Don't be fooled into thinking that San Francisco is a sunny summer destination simply because it's in California. Just as it has its own brand of people, architecture, and city planning, it has its own weather program as well. 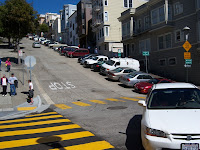 Imagine strolling through said architecture, enjoying the sights and burning off needless calories since everything is uphill both ways and you can't drive anywhere because there's nowhere to park.

Your state of ecstasy is then disturbed by the fresh-smelling sewer that reveals itself upon you at every manhole cover. 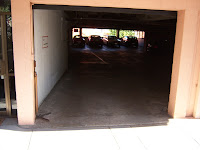 But you brush that off since the entire city can never bore you to death, especially due to the fact that you've just arrived from such a place. So, you can overlook such small pests in San Francisco 'cause it's such an interesting destination. You can never stop marveling at how small a structure looks from the outside and how spacious it actually is inside.

Then, a sudden gust of wind so bone-chilling that it makes you soil your pants causes you to forget it all and teleport back to your warm house.

I said it before, this place has everything... 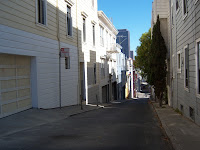 The stench of old moldy buildings is never far from where there are buildings, and the grid looks like it grew out of the ground. The whole bus-stops-at-any-corner thing that I talked about last time is in fact here for a reason, since the entire city is like that.

You're supposed to turn left but you actually go straight, streets randomly change names just because they feel like it, and downtown intersections have traffic flow from more sides than a European roundabout. City planners couldn't be bothered to take down trees, instead putting some cement around them. I'm surprised that there are no traffic lights hung off those trees... 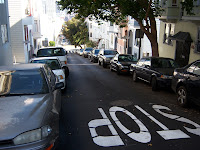 Thought that Lombard street was just a tourist attraction? Nope! It's a reflection of the entire city.

It's bent up the weather too, since August is what it is in the Southern Hemisphere: summer lasts during May and June, which is the only time you should come and visit if you want that sparkly first impression. On exactly August the first, it becomes winter sans rain, snow, or other visual aspects of said season. 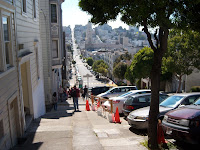 Fortunately, it's not that bad now (at least not yet), so we still enjoyed sunshine and times when a jacket is just too much. We therefore took advantage and went for a day-long stroll to pick up where we left off last time.

The first stop was to see what those two random towers stretching themselves above the city's hilly skyline were going on about. It so happened that the one closest to the water was the one we arrived at first: Coitus Tower. 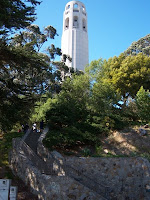 It wasn't that simple though: one has to work quite hard to get to Coitus. One must climb and climb and climb, and then go up some stairs, cross an interesting street, climb some more stairs – which this time have the inscriptions of the names of people who have during the years contributed to Coitus – give some money, wait in line, cram yourself in a small space with many other people, and raise yourself up. Then you've arrived (finally) at the very top, the peak, of Coitus. 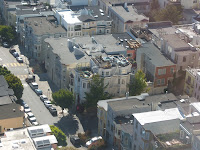 The view from Coitus is rather interesting, and reveals the ingenuity of the people of SF. Since most houses are old and moldy, they still have some character and most importantly of all, flat roofs. Residents have taken full advantage and made huge terraces on those roofs to enjoy the little sunshine they get, and the view that they always get. Especially if they live on a hill, which most of them do.

While up on Coitus, you notice the unbelievable intelligence of people when they are finally inside. Namely, they have devised a game where they shoot change through the space between the plexiglass windows and the rest of the tower structure so that their coins land on the window ledge.

Must be the lack of oxygen. Which, in their case, must be all the time.

You'd think that after having put in all that work getting into Coitus, getting out again would be easy. Nope. The line to get down is as long as it was getting up, and you have to jam yourself into the small box that you came up in. The stairs are for emergencies only...who could imagine walking would be appropriate...? 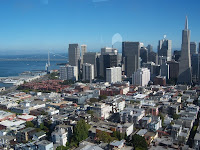 Coitus is so educational concerning people and their nature that I could go on for days...I'll end with one final point.

Usually when talking about annoying tourists, people first think of Americans. Not in San Francisco. The most annoying and ignorant among the breathing wore French (!), German, Norwegian, and Spanish flags on their hats and backpacks. Perhaps they are getting back at the Americans for all that "don't bring me any snails" attitude.

Too bad that the only people that are enjoying their wrath are other tourists and the Chinese immigrants that work at the tourist attractions.

After eventually getting out of the tower and realizing that standing is actually what makes people tired (and not walking!), we went to go see the big pointy building. On the way, Italians tried to seduce us into patroning their restaurants (buona sera, you wan' somthin' to eat?), and we stumbled upon Mitsubishi filming a commercial for their new Outlander Sport micro-SUV.

The pointy building – I assume – is the heart of SF's downtown, which – I assume – is supposed to be the nicest part of town. But it wasn't. Things were more interesting (and more populated) two blocks earlier. There wasn't even that much traffic...so if you want to see nice SF downtown, take the cable car to Market street and snap a photo of the pointy building from there. It's almost as visible as the Pelican's lair anyway.

Then go back to Pier 39 and console yourself with some food from Boudin and chocolate from Ghirardelli, which were actually better than I remembered. 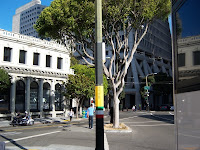 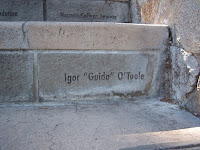 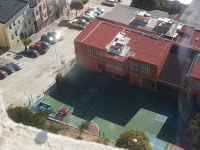