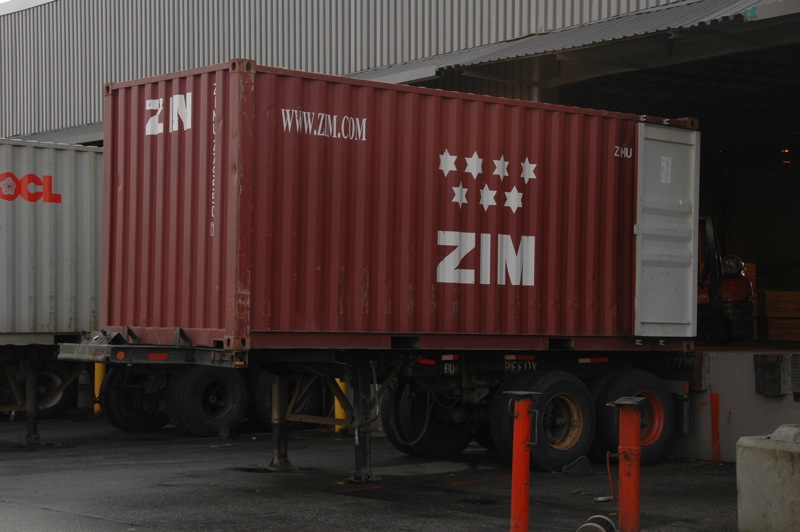 After clearing customs and the shipline this past Friday, I arranged a trucker to come by the port, pick up the container, and take it to their warehouse, where we would unpack it (!). The port is never open on weekends, and Monday was a holiday...so today it was.

We arrived at the warehouse this morning and met up with my contact at the main office. He told us that there was a lineup at the port and it would take longer than expected to get to the container.

No matter...there was a Starbucks nearby.

Almost at the exact moment when we returned from our morning coffee, the truck was backing my container into the warehouse. We quickly parked the car, grabbed the provided high-visibility vests, and pace-walked to the warehouse.

The container's doors were already open, which did the counter-intuitive thing and actually slowed me down. Perhaps it was the worry that the effects of my contact's observation might have come true ("it's almost not tied down at all")...so I inched closer, anticipating that with the next step my gaze will meet that of the Fića's.

And after a century of shuffling, it did. The car was in one piece.

The problem was that it seemed to have shrunk in the wash transport.

Allow me to elaborate: I have indeed sat in a Fića before (although that's it), and seen mine on many, many pictures, but I had absolutely no idea of the scale of the subject. I had never seen my Fića in person until this moment.

With a dose of twilight-zone disbelief, I half-briskly entered the container as the yard workers were busy unlashing it. Everything was there. Everything was the way it looked in the photos, but it was all much smaller than I could have imagined. Nevertheless, I relentlessly made circles around my car until the size of the thing began to make more sense.

While the workers struggled to cut the lashing free (being much tighter than it looked), my contact – seeing that we're car people – took us to see a project they had all been working on during slow shipping seasons.

He flipped over a dusty tarp which revealed an olive-green 1937 Chevrolet medium-duty truck that the workers restored themselves over the years. Back in its day, the truck actually served the very industrial park that the warehouse is in. Long after its retirement, somebody discovered it and decided to do what I did with my Fića: give it a second life.

A worker called for the manager: they had finally cut the Fića free. I got in, set down the parking brake, took it out of gear, and steered as they pushed the car out of the container, across the platform, down the ramp, across the railway tracks, through a passage and out into the yard, to a makeshift parking space marked by cones.

Feeling as anxious as a girl at her favorite concert – except I still had my top still on – I went through the car from top to bottom while waiting for the flatbed to arrive (no flammable fluids allowed during shipment). Within the first ten minutes, four people offered to buy the car while every driver abandoned his truck mid-yard and ran over to see the Fića up close.

I rode along in the flatbed as the Fića bounced up and down behind me, like a child that was just told he's going to Disneyland. Not a single person, be it pedestrian or driver, was without a reaction when they saw it pass before their eyes on its mobile parade stand.

There were people driving parallel to the flatbed, staring at the car; wide-eyed folks pointing with their mouths open; confused people who lost all spatial abilities in traffic because they were too busy ogling, among many others.

One observer in particular was so hypnotized that she didn't notice that her light had turned green – cue my flatbed driver, who nonchalantly took advantage and made his left turn anyway.

Arriving at the house, I rolled the car down the flatbed and steered it as its two external horsepower propelled it into its new parking spot – in a driveway half a world away from where it all began.