(The lights fight with the night for your eye's attention.)
In spite of the kitsch and false sensation of feeling important, it's all worth seeing, if nothing else but for its creativity. There's life in the city, after all, and there's a huge amount of things to do: for instance, the nightly shows by world-famous DJ's, comedians, and other artists and performers.

There is also every conceivable type of food known to mankind, and some of it is actually high-quality and authentic... 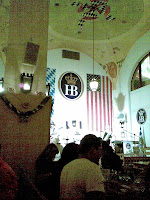 One of the restaurants we visited was a Bavarian one: Hofbräuhaus Las Vegas. It's a huge hall across the street from the Hard Rock Café styled in the appropriate architecture, complete with an impossibly-tall ceiling held up with arches; long wooden tables and benches; traditionally-costumed hostesses and live band; and Bavarian beer chants every 15 minutes.

Even the waiter was from Munich, and so was the live band, judging the latter solely by facial structure.

The food was authentic as well, with hand-made spatzle, not-too-spicy goulash soup, jägerschnitzel with sauce actually made from wild mushrooms, and Oktoberfest beer imported from Munich only while it's in season. 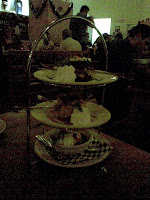 There is even a particular dessert special where you get German apple pie, vanilla ice cream with hot raspberries, and black forest cake all at once, stacked one on top of the other on a rack. The most authentic touch, however, was the Bavarian drinking paddle.

Here's how it works: a special waitress clad in black – appropriately, as you soon shall see – constantly roves around each table selling shots. If you are up for it, you get up, buy one and drink it. Then you bend over your table, the waitress gets out the paddle, and smacks your bottom as hard as she can with it.

That happens for each shot you drink – this is surely the cure for binge drinking.

It's immediately clear that somebody in the restaurant has just bought a shot when the sound of solid finished maple colliding with their buttocks echoes off the Bavarian arches. 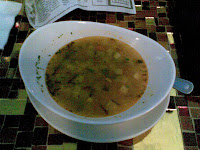 A couple of Italian restaurants – Trevi in Caesar's Palace and Tinoretto in The Venetian – are just as good. Each offer refreshing soups that are identical to those made in Italian homes, pizzas with high-quality cheeses, salads dressed with balsamic vinaigrette, lazagnas free of pointless ingredients that have never even heard of Italy (though the lazagnas were a bit too soft), and impeccably savoury tiramisus that don't drown in their own coffee.

However, these are not stand-alone restaurants like Hofbräuhaus, but restaurants in casino-resorts on the Strip. Those are – if you'll remember – narrow-minded, movie-set stereotypes of real places that Americans have never really heard of. So something has to be askew. And it is.

After your satisfying meal at Trevi – also made possible by generous portion sizes – they offer you coffee and desert. You ask them to bring you a double espresso and a banana split, per favore.

After some minutes spent solving the Sudoku puzzle printed on the wax paper that your bread comes on, they do. But your espresso seems to have eaten too many "New York Pretzels" at McCarran International after its arrival from Rome, such that it's now a quadruple espresso. And the banana split...well, it looks like this: 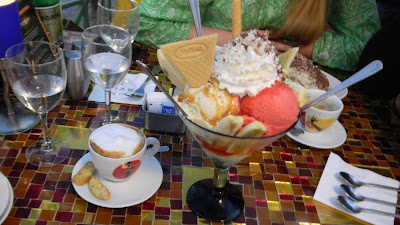 I wasn't sure whether to laugh or cry, especially since if I took it back with me, I'd still be eating it now. But the corpulent lady at the next table knew exactly what she wanted to do with it.

Surprisingly, none of the described food was priced like Las Vegas. The prices were on par with those I mentioned in my California road trips.

What California doesn't have in common with Las Vegas was how it got started. While the Hoover Dam did increase the traffic of people coming to the desert city, the big, luxurious casinos weren't pioneered by eager developers. They were built by illegitimate businessmen.

Remember Moe Greene from The Godfather? He is based on Benjamin "Bugsy" Siegel, widely accepted as the founder of the city's slot machine obsession.

The Jewish mafia sent him to Las Vegas – already developing into a gambling capital due to the aformentioned traffic increase – to expand their gambling operations. He did so by building the Flamingo, a casino-hotel unlike anything that came before it. It was the last word in luxury, opulence, and sheer ostentatiousness; it was also the first to offer in-house overnight accomodation for people who want to see if their luck will turn around tomorrow.

Unfortunately – and not unrelated to the fact that 'the mob' was building it – the costs became just as ostentatious, with black-market materials being delivered to the site during the day and stolen from the same site by night, only to be re-sold to Bugsy a few days later.

Criminal accounting wasn't the end of Bugsy's troubles: the opening of the Flamingo was rushed, and it showed. Many of the things that were meant to be the greatest incentives to come there were not finished, and the project plunged deeper into the red.

Bugsy, after being given a second chance, stopped at nothing to bring profitability to the table. But by that time, the bosses could wait no longer: Bugsy was 'whacked' soon after.

The history of the flashy side of Las Vegas is so well-known there that the Tropicana houses a museum that's dedicated to telling the entire story. Appropriately called "the Las Vegas Mob Experience" and hidden away where nobody would think to look, the stories of Bugsy and all the others involved in meeting demand and making Las Vegas the center for compulsive gamblers everywhere are told.

The exhibits are various, from a Studebaker used by a 'wise guy', to personal effects, to firearms used in settling scores, and even life-sized silhouettes of each historically-instrumental mobster. Bugsy was the tallest by far, at 5 feet 11 inches. The rest of them towered to an unbelievable 5 feet 5 inches...

Somehow, the word "intimidating" and a height of five-and-a-half feet – with shoes on – seems like a joke. Like something out of a cartoon, perhaps...

Maybe it was because of his towering height that nobody dared displease Bugsy and call him that to his face.

Not surprisingly, photography was not permitted in the Mob Experience. Disobeying this results in a more "hands-on" mob experience...

Various mafias continued to run Strip casinos until the late eighties, when corporations began to built the mega-resorts that you see today – starting out with the Mirage. Corporations also began to gradually buy out the mafia-run casinos, razing them to the ground and building today's attractions in their place.

Mafia casino presence has all but been eliminated in the city, though some residents resent the days that the corporations took over. One mentioned that there was no crime during the mafias' fifty-year stronghold, as the mob (apparently unaware of the concept of irony) dealt with criminals efficiently and strictly. Not so today.

Even though the nickname "sin city" seems the most appropriate to most people, it is effectively a misnomer. One of our tour guides, a fifty-four-year-old born and raised in Las Vegas, mentioned that the city's residents are actually deeply religious. 80% of them are affiliated with a major religion and non-Strip Las Vegas (pun intended) is actually rather normal.

Las Vegas is also the marriage capital of the world; it's easy to understand why, since each resort has at least one wedding chapel besides all of the stand-alone ones throughout the area. The Venetian even offers weddings on the canal boats!

Las Vegas is also the divorce capital of the world: local law dictates that to begin the divorce process, the other party has to be informed, but how they are informed isn't regulated. So, most would-be divorcees post this notice in the local newspaper. If the notice isn't replied to within 30 days, the divorce is granted by default.

Our tour guides said he was in the paper once...

So, make sure to check the newspaper often if you got married in Las Vegas, because "easy come, easy go."

Come to think of it, "easy come, easy go" is more loyal to all aspects of the true Las Vegas than "sin city" is. The latter saying is another narrow-minded stereotype just like the Vegas interpretation of Paris. 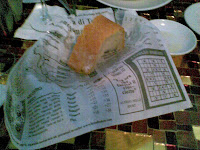