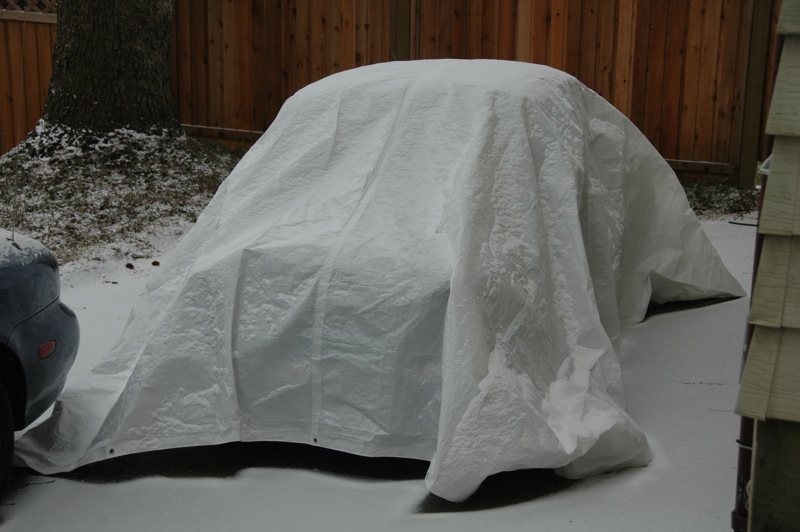 Some call it "snow." I call it "getting in the way." Worse still, I actually like snow.

It makes sense, I promise...

Despite being an active participant in my ongoing house renovations, I've still managed to get the Fića closer to the point of the formal 'de-embargo.' I've fixed the right sun visor, such that it now stays up, instead of just dangling about. The remaining minor bits that were pending are done as well, so the only thing standing in the way is the electrical misadventure.

There are, in fact, two things in the way: the electro-gremlins, and inclement weather.

Even though the car is still under that very same "Christmas tree," it is still outside and therefore progress is subject to the weather. If there is any hint of rain or surprisingly distracting white stuff, then all work is halted until things dry out again.

Fortunately though, I've done all there is to do with respect to the theory side of it: I've narrowed it down to the components that appear to be faulty (as they each are connected to at least one 'gremlin-ed' part). Now it's time to open the car up, test if everything is going to the place it should, and if each component is getting sufficient electricity.

So, as much as I like snow, it's in the way of progress – thus, before progress can happen, the snow must thaw out. Given the snowfall warning, though, that progress might be delayed a bit.