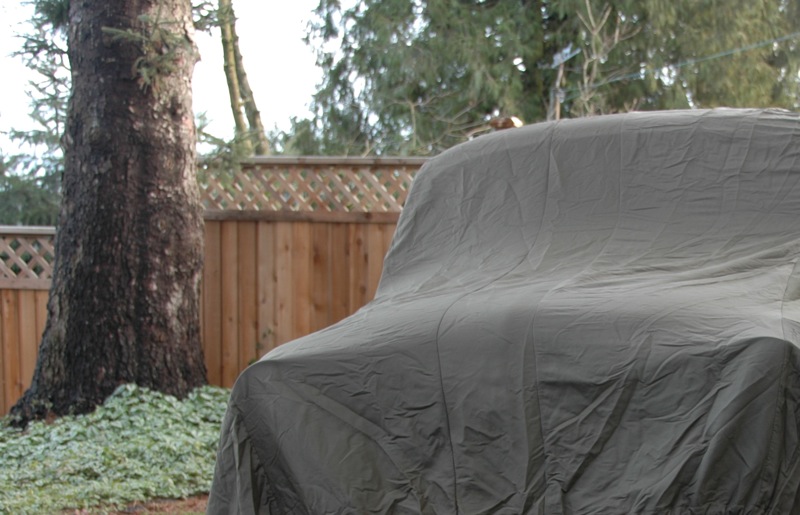 To the right of my driveway, by where the Fića is parked, is a twenty-foot (or more) pine tree that loves to shed needles. These needles are so abundant that this tree's days are numbered.

But while it's still here, we figured that we could make some use of it; this tree is therefore also this year's Christmas tree, which was convenient since last week, we received a thirty-eight-year-old four-wheeled present that perfectly matches in proportion.

The Fića started only in that one instant I talked about in the last post. Despite many more tries, the engine wouldn't announce its presence. Today, we replaced the spark plug cables with the new (spare) set, and they clicked right in. I turned the key, and nothing yet again.

We removed the spark plugs – which showed that there was fuel in the mixture – gave them a good cleaning, and sanded down the remaining residue so that the plug could make the sparks it's supposed to. We then poured a little fuel into the carburetor, to make sure it wasn't dry (which it probably was).

We cleaned up the inner workings of the distributor cap in the same way, checked if the fuel pump was actually pumping fuel (it was), checked if the spark plugs were doing their job, and gave it another go.

Considering it did technically start with the old spark plug cables, we put them back on, and gave the carb some more fuel. I turned the key once more, expecting more of the same...but it sputtered to life!

Modern cars have electronic fuel injection, which means that when it's minus forty thousand degrees outside, you just turn the key and hold your foot on the brake. The car does the rest while you play with the stereo.

The Fića, like all other cars of its time, leaves this up to you. As such, you have to hold down the gas pedal when it's a cold start (and pull the choke as well, sometimes) so that the engine won't die. You are the electronic fuel injection, and you have to help the carburetor (something that EFI cars don't have) keep the engine running.

Once the engine got warm enough so that no pressure on the gas was necessary, I drove the car back-and-forth a bit.

You thought this was going to be easy, didn't you?

But wait, there's more: the tires need to be aired up from sitting still during the shipping and the parking brake needs to be tightened, since it doesn't actually work at the moment, among an assortment of other things.

Like I said, old cars keep one busy. For the moment, though, I am very happy I finally made the Fića speak. It's alive! Or, it's the Fića's way of saying 'happy new year'...