The stone of wisdom 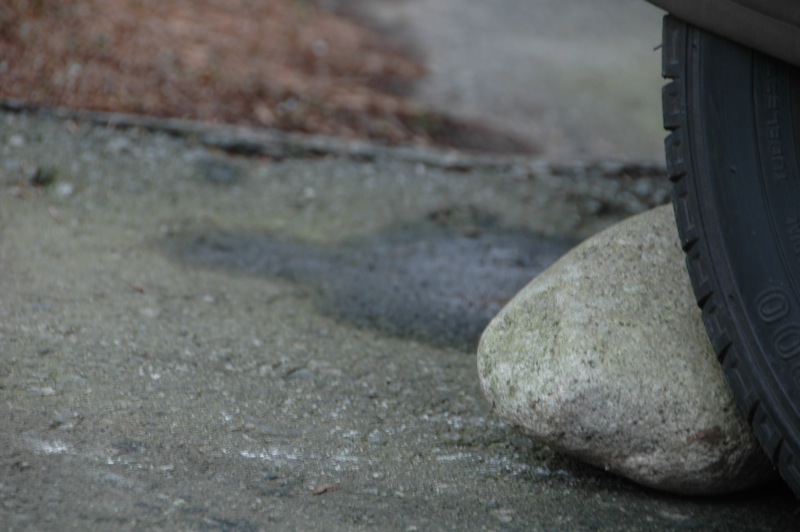 The stone you see pressed against the Fića's back tire is what we like to call the stone of wisdom (kamen mudrosti). Its inherent purpose is to keep the Fića from heeding the sloped driveway's calls of having it roll backwards and hug my fence.

Don't be fooled, though, the car is modern enough to have a parking brake. The thing is, it doesn't work.

I do keep it in gear when it's off, which does a fine job of holding it, but that's not exactly wonderful for the gearbox. Therefore, the stone of wisdom must sub for the parking brake until I can get it adjusted, and the gearbox is relegated to backup duty, should the stone decide to not be so wise...

I may have mentioned before that I have to work out a system with the gas pedal before I join traffic. That was more than a simple hyperbole: the footwork really is that complicated.

The Ford Model T, for instance, has a system where the accelerator is a lever on the steering wheel, reverse is a pedal, the brake is another lever, and one changes gear by varying the pressure on the transmission brake pedal.

Fortunately, the Fića has the same layout as any modern manual-transmission car, but the usual tricks that one usually uses to get the car going cannot be applied here.

Namely, you cannot perform a hill start without using the handbrake. This is so since the pedal is very slow to react: you give it gas, but it takes a couple seconds before the engine actually starts giving it gas. As a result, by trying to conquer a hill forwards, it ends up conquering you backwards.

This can only mean that everything must be taken quite slowly before it can be finished, since even getting out of the (uphill) driveway entails wisdom and planning.

Such is the case regarding actually driving the thing. Despite the fact that the controls look the same as any modern car, the way in which they react is completely different (you can't just get in, put it in "D," and drive). That's without mentioning that the Fića and its physics react in a drastically contrasting manner to any car you've ever personally seen on the streets.

Try sorting all that out while on a street – or on an uphill – and you will know how many things modern cars actually do to drive for you.

A driver who has only driven newer (i.e. late eighties onwards) cars is by absolutely no means or definition an "experienced driver."