A mind of its own 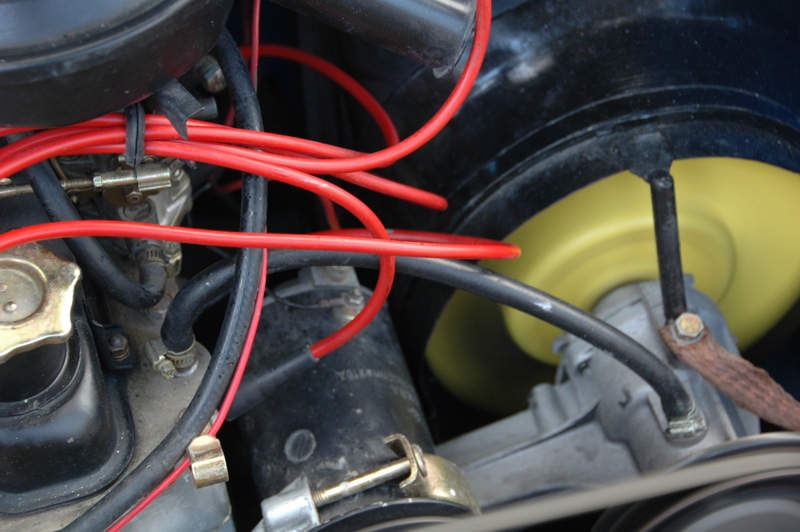 What you see above isn't just the Fića's engine running; it's an event. Although, it isn't so for the reasons you might expect.

This event doesn't occur if the battery and oil warning lamps do not light up beforehand. When you turn the key in the ignition of modern cars, most (if not all) of the warning lamps in the dash come on. When you crank the car, they begin to turn off. It's the same with the Fića.

I mentioned before that the gas pedal sometimes had a mind of its own. It got to the point that the only way we were able to start it was by applying the throttle directly in the engine compartment, that is, giving it gas by hand, rather than by foot.

An examination of the throttle workings and how they responded to the pedal inputs resulted in an interesting finding: the real culprit was that the end of the throttle cable connected to the throttle itself wasn't tightened enough (yellow arrow).

Two hands and a screwdriver made the gas pedal drastically more responsive.

Trouble was, after applying quite a bit of pedal pressure and then letting go of said pedal, the engine didn't want to quiet down.

Another examination resulted in another interesting finding: when you let go of the pedal, the throttle will let go only up to a certain point.

The throttle mechanism includes a catch (A) that, without any pedal pressure, rests on the adjacent screw, which acts as a limit to how low the RPM's can go. The catch should, therefore rest at C when you let go of the gas pedal completely, but most of the time, it instead chooses to rest at B.

My theory is that there are two nuts to be loosened (D and E), which should make the throttle rest at C all the time. But these are all minor adjustments; the engine is healthy.

When the brake pedal is pressed, the brake lights do not go on, but all of the position lights do. When one turns the key in hopes of starting the engine, the warning lights sometimes decide to sleep in, even though the engine ran only minutes prior.

There was a spot within the key's travel while turning it in the ignition where the engine didn't run. I held the key there and then took it out to the sound of silence. The electrical phenomenon didn't reoccur, though I did develop a desire to track down a certain automotive electrician who lives on the other side of the planet...

Up until today, I was convinced that the months of inactivity took their toll on the battery, and that for that reason, the car was temperamental in starting. Now I'm not so sure.