Even those allergic to materialism will agree that the sensation of buying a new gadget feels indescribably incredible. Even when the item in question is a lowly Kindle, the ecstasy experienced when taking the device out of the box and seeing it for the first time engages you like few other things do.

In the last little while and within days of each other, an alarming proportion of my friends all treated themselves to an iPhone 4. I wonder if they coordinated, just to mess with my mind…

While the existence of a minor conspiracy is debatable, what’s certain is that they all experienced the ‘new gadget high’ very recently.

Flying high above Silicon Valley, beaming new owners surgically extract the ‘newborn’ out of its packaging, lest they give it any unwarranted scratches.

In the case of Apple products, they come pre-fed from the factory and as such aren’t sleepy out-of-the-box. New proprietors can instantly watch how the reflection of their ear-to-ear grin washes away in the appearing image of the touch-sensitive home menu.

The following hours wash away in a similar fashion, as all pre-installed software is thoroughly explored, music libraries are uploaded, synchronizations are carried through, and more software is installed.

Such bliss continues through the first little while spent with the newborn device, with parents users delicately abstaining from leaving any forensic impression evidence on the shiny finish.

In a seemingly abrupt change of topic, the Ford Edge was re-designed for the 2011 model year, now boasting a shinier and much larger grille, streamlined HID headlamps, and more elegant tail-lamp elements bordering a slightly revised rear fascia.

My Limited tester also flaunts leather seats with wood trim, a panoramic sunroof, power lift-gate, satellite radio, voice-activated navigation, keyless entry and start (enter and start it with the key-fob still in your pocket) and twenty-inch chromed wheels arguing with the grille over who’s shiniest in the land.

Driving away in a car like the 2011 Ford Edge is not unlike the experience of getting a new gadget, mostly because the Edge mercilessly shames many laptops, tablets, and smart-phones. You’ll spend hours playing with the backup camera, navigation system, and Ford’s new “MyFord Touch” system, which debuted on this very vehicle.

MyFord Touch is effectively the first factory-integrated car computer system. The interface consists of two 4-inch screens on either side of the (analogue) speedometer; physical buttons on the steering wheel (each set of buttons corresponds to the screen on the respective side of the speedo); a touch-sensitive panel comprising the center stack; and an eight-inch touch-screen adorning it.

Via this interface, you control every single aspect of the car – including the climate and radio, which use the glossy touch panel instead of traditional physical buttons. This makes things slightly more complicated…

For instance, instead of glancing at the instrument panel to check the fuel level, you have to use the left-hand steering wheel controls to summon the economy screen, where the colorful fuel level and economy information can be found.

Instead of twisting a knob to increase the heating temperature, you can either use the right-hand steering wheel controls to find and enter the climate menu on the screen and increase the temperature, or you can look for the touch-sensitive version of a knob on the center stack…

Except there isn’t one: the temperature is controlled in much the same way that you used to seek through radio stations or CD tracks – with “plus” and “minus” touch-sensitive hotspots. By the time you’ve combed through all of the markings on the touch panel, you will have twice rear-ended the car in front of you.

Most other cars – including less-equipped 2011 Edges – have physical buttons linked to all of the stuff you control while looking at the road: the climate knob has a particular (and to a certain extent, standardized) shape that your fingers know to look for without any input from your eyes.

This lets you increase the temperature without crashing.

However, MyFord Touch center stacks exclusively use touch sensitive surfaces. Any touch-sensitive surface – be it panel or screen – has an inherent problem: in order to operate one, you have to look at it. And that’s not so good when you have to drive at the same time.

You must be thinking, “Why not just use the steering-wheel controls? They are blind-finger-friendly and you only have to look at your instrument panel to change the station or heat the seats, just like you would while checking your speed!”

Well, that is what the sales literature says… The fact of the matter, though, is that all of the center stack functions are squished into the right screen, and the vehicle stats are confined to the left one.

Imagine that, on a cold morning, you adjust the ambient temperature to your liking with the steering wheel controls before you set off. Some distance down the road, you want to listen to the radio – but the appropriate screen is still in the climate menu.

In order to listen to the radio, you have to exit the climate menu, enter the entertainment menu, select radio, and seek to your desired station, all the while experiencing the necessity of looking at a screen instead of looking at the road.

I think you know where I’m going with this…

The most technologically diehard of you now say, “the solution is simply to be patient and do all that while stationary.”

Nope. There are screen functions that can only be enjoyed while the car is moving, like the function that displays exactly what the all-wheel drive system is doing to each wheel at any given moment.

Try telling that to the police officer who pulls you over for almost running him off the road.

At least your phones and ‘pods can connect automatically and wirelessly, but that’s like saying “at least the tornado left the bathroom standing.”

Given that I’ve dedicated such a disproportionate amount of literary real estate to the car’s entertainment system, the rest of the car must be nothing special, right?

The papers may say 285 horsepower, but it feels like half that, in no small way related to the transmission’s unhealthy obsession with short-shifting. In other words, the only way a 3500cc, almost 300hp V6 engine can impress in fuel economy evaluations is by not actually using any of that power, and therefore not using very much fuel.

Allow me to illustrate this: I took the Edge to my favorite uphill that tests a car’s useable power very well. Any car with the Edge’s (published) power-to-weight ratio will undoubtedly obliterate this long obstacle without breaking a sweat.

Many times before, I took a larger SUV with a smaller and less-powerful engine up the same hill. Remembering that experience while living it with the Edge was like failing to keep up with my own, real-life ghost car. The Edge’s horsepower is theoretical.

It’s similarly underwhelming when it comes to steering feedback – which is unfortunately expected with electric-assist servo – and less of the road surface is felt than expected – which is surprising, given the twenty-inch ‘rollers.’

The Edge does even more to convince you that you’re piloting it over the Internet through a mouse-and-keyboard tandem: the turn signal stalk is automatically self-centering (which also inherently resists quick left-right signal commands), rear visibility is as good as through a Nazi bunker gun slot in Medal of Honor, and the manual shifting function is controlled by buttons instead of a physically-moving shift lever.

Though, in what can be described as ill-mannered irony, the seats aren’t fully power-operated and the steering wheel is manually adjustable…

The Mercedes-Benz GLK350 4Matic starts at $43,800 and has about the same power, space, and fuel economy, but is quicker (6.7 sec to 100km/h), drives much better, has better quality and give-or-take the same equipment.

The Audi Q5 2.0T Quattro starts at $41,200 and has slightly less horsepower and space, but is still quicker off the line (7.2 sec to 100km/h), drives much better, gets better fuel economy, has better quality and give-or-take the same equipment.

The BMW X3 xDrive28i starts at $41,900 and has about the same power, space, and fuel economy, better acceleration (7.1 sec to 100km/h), drives much better, has better quality and give-or-take the same equipment.

Furthermore, for 51,000 of your dollars, choose any of these three and they will completely eclipse what an Edge Limited offers for the same $51,000.

Why buy a Ford for Mercedes, Audi and BMW money? For one reason: to show off how high-tech the MyFord Touch system is. And if you do this, your friends will politely smile, pat you on the back and drive off in their new GLK, even more satisfied with it than before.

I concur with them. 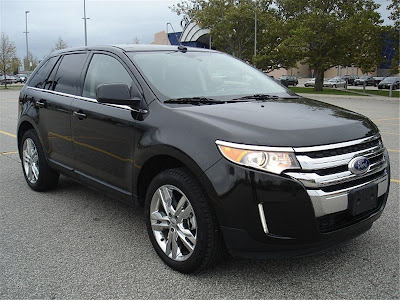 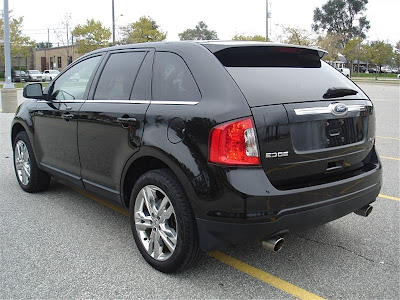 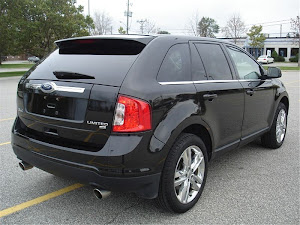 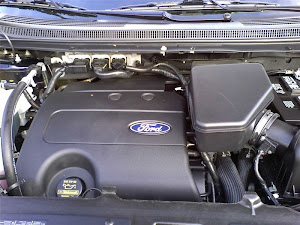 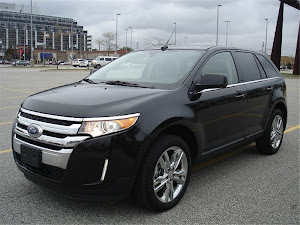 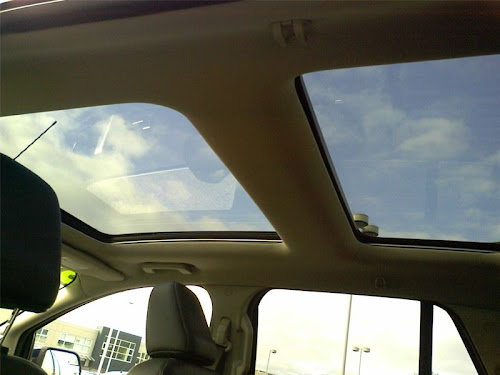 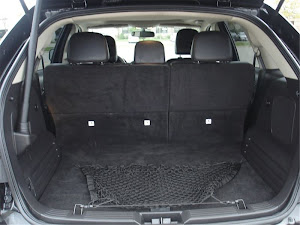 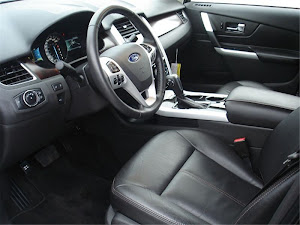 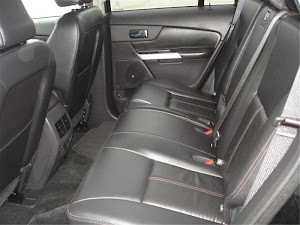 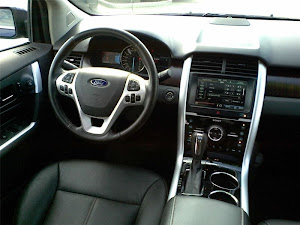 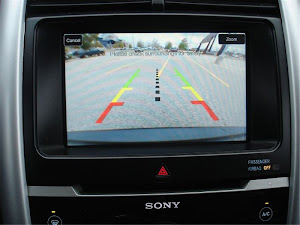 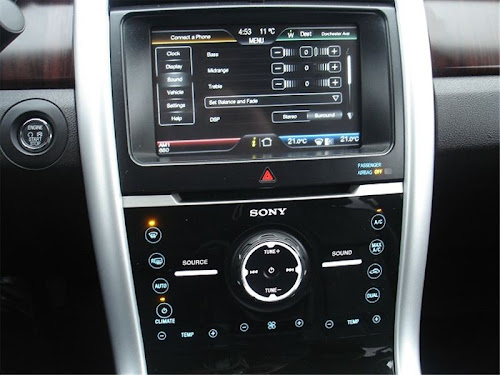