Hanging by a wire 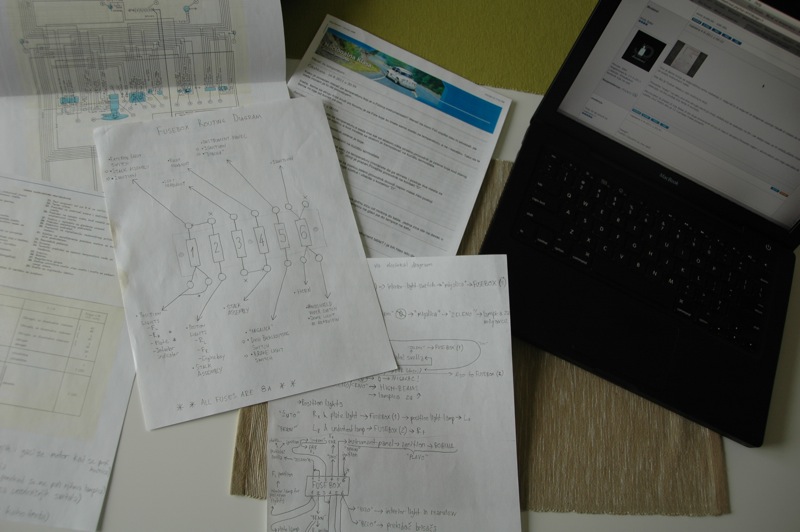 (Many maps to one target.)
More progress is underway on getting the Fića to the stage it should have been a year and a half ago. However, the further along I go, the more things complicate themselves.

Some weeks ago, I set to erasing all traces of that cheap, peeling, and haphazardly glued-on gutter trim. Taking the unworthy plastic off proved incredibly satisfying – not unlike liberating a parasite from its undeserving host – and culminated with a swift toss of the wannabe-shiny-stuff into my trash can. It was so swift that I forgot to take a picture...

The rest of the day passed with scrubbing the excess glue (read: almost all of the glue applied in the first place) off the Fića's painted gutters. Patiently eradicating all clumps of goo off of the delicate blue paint is best described as a labor of love. Especially when considering the many hours spent in the chilling winter air to avoid damaging the paint by scrubbing.

Which is why I also sprang for a major parts order for my little police car. New, correct gutter trim, along with the clips that are actually supposed to hold it on (instead of adhesive) are on the way, as are certain small pieces that the restorer never bothered to install, and new window regulators (the winding mechanism) to replace the old, worn-out ones. Now I'll actually be able to roll down the windows more than halfway!

However, it's never that simple: all of this won't get the Fića going, because the electrical problem is still alive.

It turns out that all of those gremlins are actually one and the same: the restorer wired the entire car wrong!

Basically, half of the car's electronic bits are connected by a single wire, which (as a result) overloads the battery, not leaving enough juice for the car to start. Half the lights also stopped working recently, for the same reason.

Furthermore, that one wire isn't connected to the fuse panel (like all wires should be), but welded to it instead!

The only way to remedy this is to re-wire the entire car. And I'm not exaggerating.

The situation might actually be a bit less bleak, as it's possible that the green wire has the rest of the electrical installation wired into it not far from the fuse panel itself. This would mean that I won't have to re-wire the entire car, just parts of it. But seeing how things have gone so far, I don't expect pleasant surprises anymore.

Regardless, a couple of contacts on the fuse panel are broken, preventing me from wiring the car correctly...so I have to find a new panel in order to proceed. Trouble is, they are extremely uncommon to come by.