The drawing board, again 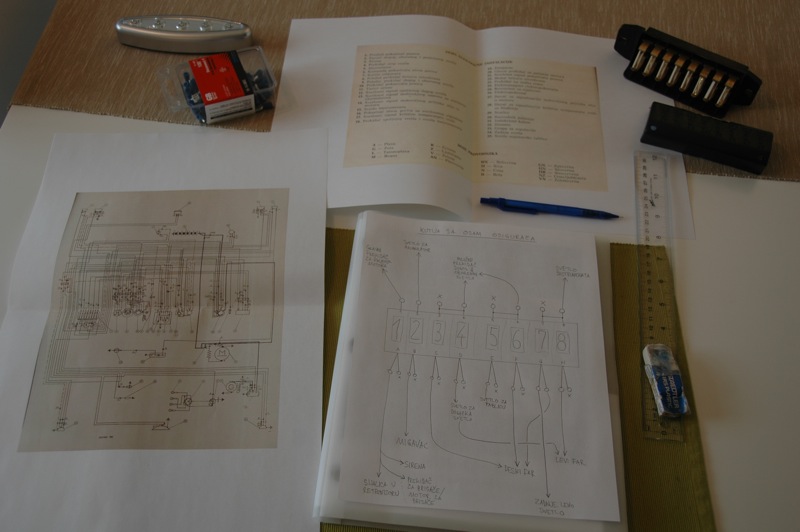 (The only way to sort out the mess.)
When the universe forces you to wait – be it for a car part or for the expiry of a penal sentence – you have time to think. For the simple reason that you can't possibly do anything to make the end goal arrive any faster, you have the (ironic) luxury of thinking about alternatives, and working the possibilities that they bring into your current dilemma. Perhaps there's something else out there – an undiscovered alternative solution – that can bring results when the current strategy seems to be doing anything but.

In the interim of waiting to find a six-fuse-box, I contemplated the option of converting my Fića to an eight-fuse-box instead. Which could be complicated – or not...

All other Zastavas that were introduced around that time (namely, the 101 and 128) only ever used "eights," thus, making all Zastavas carry the same fusebox increased economies of scale (lowered overall fusebox production costs).

As a result, it would not be impossible to convert my Fića to run an "eight" – many owners have already done so, as will I eventually – but there may be differences in where and how the wires run through the car. Solving that issue would involve dismantling almost the whole car to get at the wires...not exactly doable at the moment.

However, given that the restorer never wired my Fića to the correct "six" wiring scheme despite installing a "six" in the vehicle, the possibility exists that it's already wired for an "eight" – the wires could just be connected to a "six."

There is only one way to find out: map the entire "eight" circuit diagram and compare it to what's actually in the car.

Just like when I mapped out the "six," I know what (in the "eight" diagram) goes where. Now, I've got to figure out what wire in the car goes where.

Comparing these two processes, mapping was only slightly complicated...