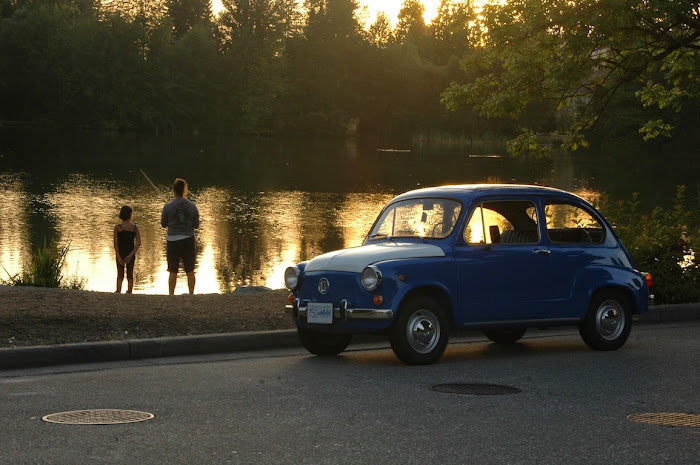 Three years. I've spent three years not driving my Fića due to a crappy restoration.

Ever since it arrived, I was constantly discovering something else that wasn't right. A blind monkey's half-assed attempt at wiring, together with 'new' parts that either didn't work or were missing altogether pushed my poor little car into the depths of immobility.

My hopes of ever driving it toppled like dominos with every problem I discovered. The lights couldn't work properly. The engine wouldn't stay on. The handbrake didn't work at all.

And it was all perfectly preventable.

I had to do the car justice. Fixing all this myself proved beyond my capabilities so two years ago, I arranged for my (new) mechanic to take the car and re-wire it completely. I could then finally do the provincial inspection and register it without a knot in my stomach.

The plan was to finish this in time for a certain midsummer classic car show...

My mechanic soon had more cars to fix than time to fix them. My guess is that all of his other customers expressed a sense of urgency, seeing as classics came and went while my Fića languished in the back of the paint booth along with his own project cars.

At the time, I was unexpectedly busy with non car-related matters, so I had precisely zero desire to put pressure on things. I let him chase the gremlins off at his own pace.

The ignition had a fault in it somewhere, repaired after being taken apart and put back together five times. The steering column stalk assembly we bought new during the restoration? It didn't work properly and needed to be replaced. The fuel gauge terminally couldn't read over a quarter tank – guess what I needed to do with the fuel gauge?

Sometimes the wrong part came – sometimes it didn't come at all. Again, everything was perfectly preventable.

There weren't bigger priorities anymore and I was running out of summer. Now was the time to free my poor old-timer from the cold grip of undeserved consequences – for good!

So I, too, would put pressure on my mechanic.

"I hope to have it drivable by Friday," said he, before I could even insinuate anything. The show was on the following Sunday.

I paid him a visit to drop off the latest set of parts – he was now less optimistic. "It could be ready for the show but probably won't be done for inspection before then." After apparently sorting out the wiring, there were still electrical gremlins!

I wasn't about to tow the car to the show just to have it sit there with me explaining why it still wasn't done yet through a sh*t-eating grin – so the show became expendable.

My target completion date was still a priority, though I was powerless to influence anything. All I could do was be ready to jump into action at a moment's notice, whenever that moment would be.


* * * * * * * * *
"I hope to send you the final update by Thursday," writes my mechanic the Monday after the show. The next day, Thursday becomes Friday. The day after that, the wiring is completed but the projected end date is pushed to Saturday morning. Then last-minute complications arise with parts replacement, spilling the end time over to Saturday evening...

My optimism became cautious, like that of the Portuguese at the start of their match with Germany. And we all know how that turned out.

Mercifully, the car was home that Sunday morning and we test drove it immediately. It died at two red lights. My mechanic said it's a matter of getting the old fuel burned away completely and adjusting the throttle cable...

I got lots of compliments while trying to start the car at the side of the road, though.

Eventually, tightening the throttle cable seemed to keep the engine from dying, so I booked an inspection for the following Saturday.

When we got there, the inspector said he had no idea what was stock on the car (he needed a day's notice – I had given him four) and was thus petrified about passing it on his own account. He wanted the "ok" from the government first, which could only happen during the work week.

The following Wednesday, he calls me. "Everything went perfectly, come pick up your paperwork!" "TOLD YA!!!" I exclaimed in my head. On to getting it registered, then...

The car was already legally imported and its deed of gift (it was gifted by a family member) was enough proof of ownership. This would be enough to register the car too, as I'd confirmed with faceless ICBC guy #1 before the car even left Serbia.

All of a sudden though, faceless ICBC guy #2 wanted previous ownership documents to prove the car could legally be gifted – all this from a man who didn't even know where Serbia was on a map...

My Autoplan agent was powerless to convince him, so I'd now have to wait at least two weeks for the documents to get translated and arrive from Serbia. Great.


* * * * * * * * *
Exactly two weeks later, the documents arrive and I was back at the Autoplan office. My agent phones everything in again and says that we've got all the paperwork now. "No you don't," says faceless guy #3 on the other end. He wants us to produce registration documents from the previous owners as well...

Serbia destroys all old registration records when it issues new ones so you can't fake them later. Also, what faceless ICBC dude was asking us to do is both impossible and illegal in any country. My agent asks him why we keep getting different answers from the same department – he repeats what he already said instead of responding.

Excuse me whilst I scream in the corner.

Again, we're sent home. First it was a crappy restoration causing delay – now it's needless bureaucracy. My ears are a ship's funnel: I've again become victim to the 'whoever we get on the phone' affair. It then occurs to me that since this whole thing is a lottery anyway, I have just as many chances of getting somebody with functioning gray matter – so I phone those same ICBC guys myself.

I explain the situation to faceless guy #4 – he says I absolutely do not need to find any more documents than I already have. I ask him to email me what he just said. He does.

Print. Lock house. Start car. Present printout to Autoplan agent. She reads the email to faceless guy #5. I get my BC registration.

My Autoplan agent quips (or not) that without my printed email, she didn't know what she'd do. I decide to put this piece of paper in a frame of Swarovski crystals and crushed ivory after I gold-plate it.