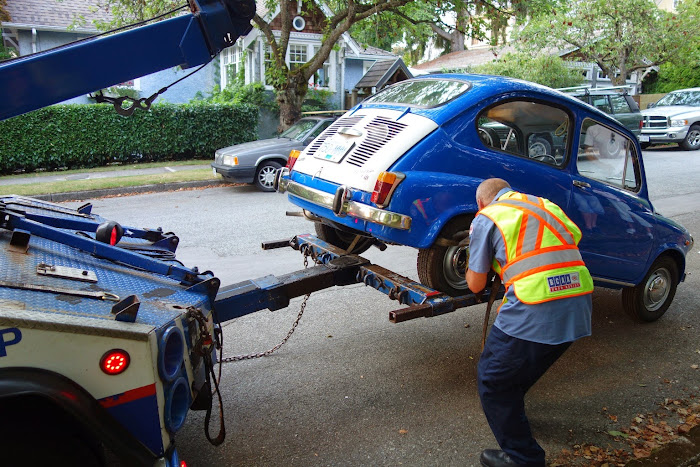 The car had only been driven about 200km since the restoration ended. I'd never have expected to be in this position so soon, even after a botched restoration. At least we were near the end of the drive at this point...


* * * * * * * * *
On the way to the safety inspection, the brake lights failed. How they managed to revive themselves only during said inspection I'll never know, but it became another thing to sort out before driving the car.

And sort it out we did: turned out the brake light wiring was the only electrical connection my mechanic hadn't touched, since it worked properly when the car left his shop! It came loose sometime during the arduous two-kilometer voyage between my house and the inspection place...

To my immense pleasure, I can now say that not a single wire is as it left the restorers so long ago.

It came time to drive the little car, then, and what a day I had picked! Awaiting my co-pilots and I was a thirty-something-degree summer's day with mild traffic – and the Fića started on the first try, too...

Ten minutes in and I heard the sound of rolling metal as if warped by a musical effects box, accompanied by the sight of a UFO wobbling on the ground in my rearview mirror. I've lost a hubcap!

I hadn't even parked the car yet and there was already a man running from across the street towards us, hubcap in hand. You won't escape from the trunk! The hubcap, I mean. 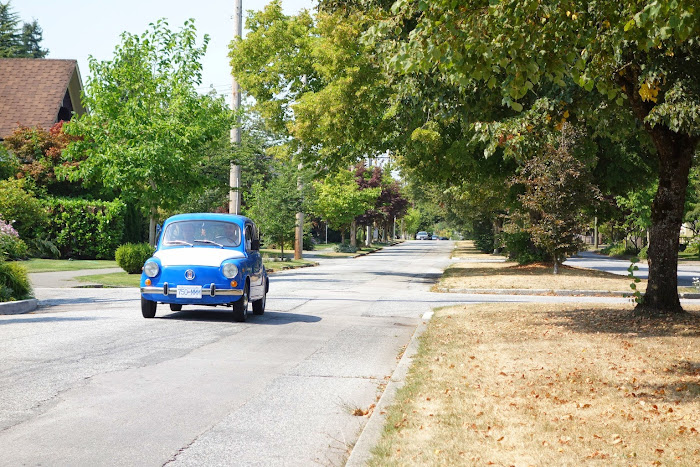 Our first port of call was an idyllic photo location, reached via the flattest route possible: only two hills to climb! I should mention that these hills aren't a problem for any relatively normal vehicle. But the experience in my still-botched Fića was...different.

Made the right turn onto the hill. So far, so good. Into second. The engine got louder and louder while the indicated maximum speed for second gear was reached and passed. Into third! Rapidly losing momentum with impatient traffic behind NOPENOPENOPENOPENOPE back into second!

I apologized to my passengers for the deafening roar that filled the cabin like safety foam in Demolition Man, but it was the only way to crest the hill alive.

Between the two inclines is a flat stretch of road broken by a four-way stop. It was my turn to go, and I began my left turn just as a Dodge Charger opposite me reached his own stop line. Instead of waiting for his turn like everybody else, he decided it was best to simply drive his plastic Chrysler from the bankruptcy era through the side of the little blue-and-white car in front of him...

We managed to avoid a frankly embarrassing death by mere centimeters. Blaring the Fića's horn was the definition of an exercise in futility.

By the time we labored over the second hill, the car's temperature gauge was almost in the red. I pulled over to let it cool. And half an hour later, it did.

Meanwhile, we had plenty of time to set up the cameras. Multiple times. Being cooled off, the Fića was ready to be moved into position – except it wouldn't start. It cranked, but refused to do anything more. Sounded like the carb was flooded...so a push start had to happen.

Besides the idiot in the plastic Dodge, reactions were very positive. Smiles and thumbs-ups abounded, with some even vocalizing their approval from the sidewalks. Other drivers waving me through intersections early just so they could get a better look at the car was not uncommon (But only AFTER the Charger incident!).

The Fića is slowly spreading happiness throughout the lower mainland... 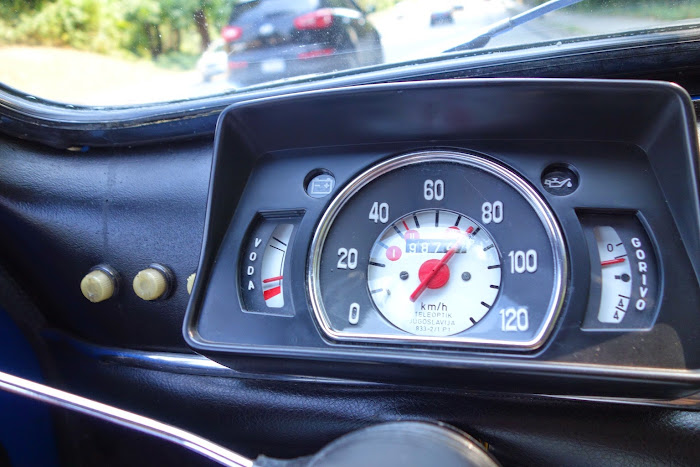 It had already been another hour or two of driving when the Fića threatened us again with overheating, around the same time our stomachs did the same with hunger. We found the car a nice parkade to (again) cool off in while we hunted down a sandwich or four.

I had contemplated parking the Fića right outside the food place instead, where I could watch over it while I chewed, but failed to do so because of hunger... Turns out I'd have something else to look at.

What looked like a crack addict tore through a Chrysler 300 parked right outside. Every failed attempt at finding whatever ended with him screaming and banging his own head. He did this for an oddly long time while I trembled at the fact that four of five of these guys could carry my car away.

Evidently, a shiny new mall hasn't helped this neighborhood improve by any degree, so we opted to leave sooner rather than later. On the way out, we encountered this: 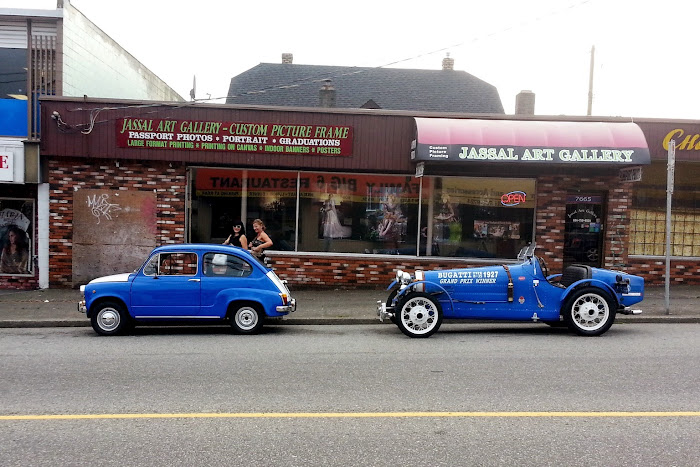 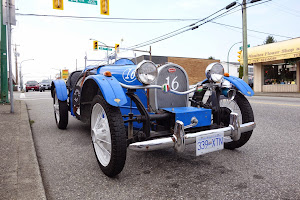 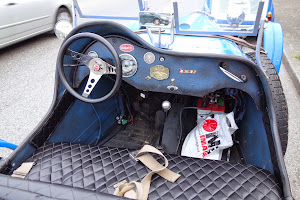 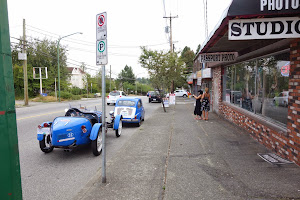 It's a 1927 Bugatti that someone has rented. Based on aesthetics alone, I'm not entirely convinced of its originality...but it's a fascinating sight nonetheless.

And those two women in the shot? They're random passers-by who happen to be Serbian...one of them owned a Fića before coming to Canada and as such didn't so much as glance at the Bugatti.

Along the route home, we stopped at the morning's idyllic photo location again for some more shots. While setting up the cameras, a Mazda CX-5 hastily braked diagonally in front of the parked Fića. A woman emerged, asking us about the car. Not ten minutes after she left, an older man bolted from a Camry freshly parked across the street, exclaiming "I remember when those little Fiats were new!"

He proceeded to tell us a story from his childhood (in the late fifties). Back then, there was a warehouse on Granville Island (then still an industrial park) whose owner used it as an indoor karting track. But instead of go-karts, he used Messershmitts, Isettas, and such! The guy often invited his friends – Camry man's father – and their kids to partake in the festivities as well.

"It was the highlight of my childhood," he recounts. "I'll never forget it."

Given that the facility was a dedicated track, all the microcars were parked outside. Once each one became worn out from the salty ocean air and merciless karting, they'd just push them over the edge into False Creek!

There's an interesting one for you local divers out there.

"Good that you got yourself something unique to drive, unlike my..." he said as he pointed to his Camry, bode us farewell, and left. 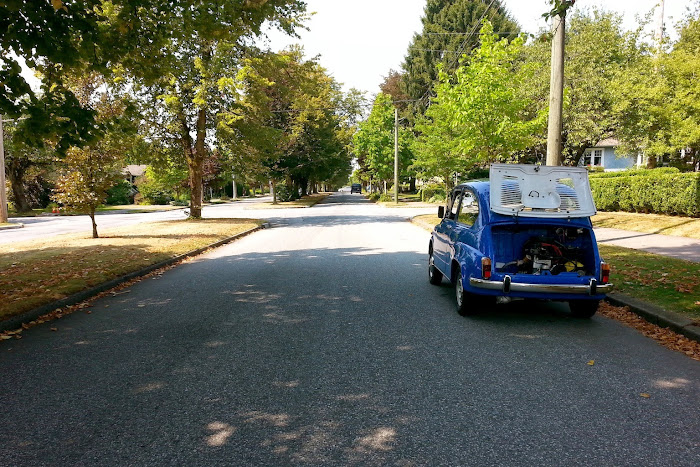 The accelerator cable snapped somewhere near the gearbox (i.e. not fixable on the roadside). I called for a tow.

The car had only been driven about 200km since the restoration ended. I'd never have expected to be in this position so soon, even after a botched restoration. At least we were near the end of the drive at this point...

The towing experience ended up being a pleasant surprise, though. The truck arrived twenty minutes early – its driver immediately jumped out and exclaimed, "I grew up with these cars!"

Turned out he's from Budapest. He recounted his experiences with Fićas (the Zastava kind!) while securing my blue-and-white one to the truck.