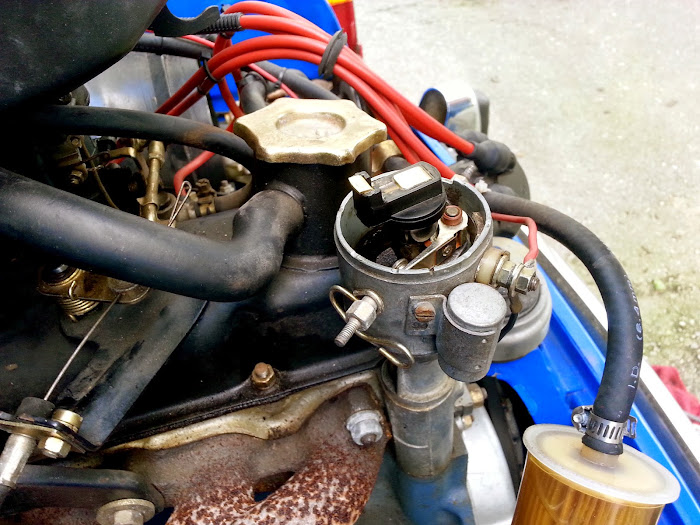 The engine has finally been tuned, and I noticed an immediate improvement. Here's what was done.

My mechanic started by cleaning the ignition points, which were more dirty than they ever should be – obviously, that inhibits the electrical contact that they need to make. He took the entire thing apart, cleaned/sanded down each piece one by one, and put everything back together.

Next, the spark plugs were removed and cleaned. Happily, they weren't any dirtier than they would be with normal use – and are the OEM ones, too.

With that all done, the car cranked stronger than ever.

Then came the adjustments to the choke. We started the car up to a rough idle – my mechanic straightened the piece of wire that connects the choke butterfly valve with the throttle itself and the idle momentarily smoothed out!

Lastly, the carburetor was tuned to get the proper air-fuel mix.

Also, the car started leaking fuel due to a brittle and too-short fuel line having finally cracked. We replaced it with a much more flexible, longer line (i.e. the exact same one we fitted to the rest of the system before installing the fuel filter), which has stopped the leak. When installing the new line, we couldn't help but notice that the Fića has a fuel pump from a bigger Fiat or Zastava...

Finally, an unoriginal fitting that actually benefits the car!


* * * * * * * * *
A couple hundred kilometers later, and the changes are clear: the car's struggle to accelerate and go up hills has disappeared completely.

The engine is quieter and doesn't seem to work harder than it needs to – which was the whole point. Plus, the maximum-speed-for-a-particular-gear indicators on the speedo can actually be used as intended now!

However, two problems remain: it still can't start reliably, and it still seems to be using much more fuel than it should.

Immediately following the repair, it started every time. From the day after, it went back to its old, temperamental self...!

The cause of both might be a clogged and dirty fuel system (something else the restorers should have done but didn't). I'm currently running the car on ethanol-free 94-octane gas with a bottle of Techron in the tank. The Techron essentially unblocks the car's arteries, which could solve both problems...