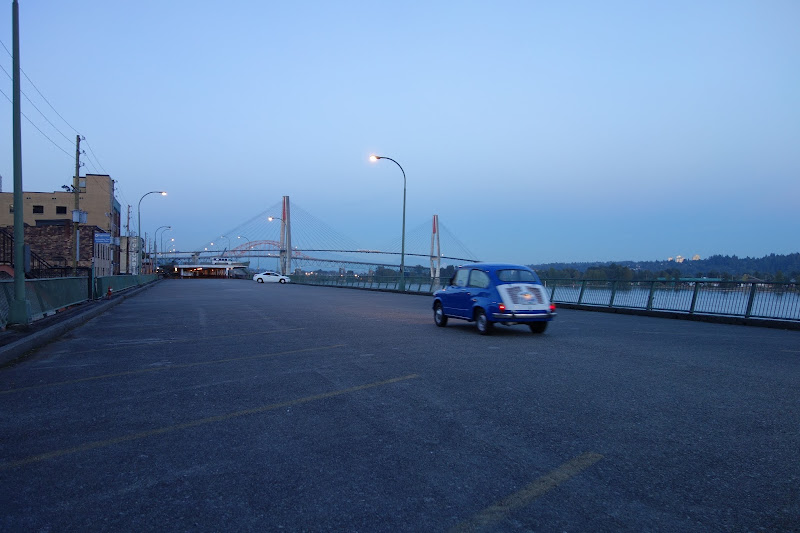 I hadn't made any repair or diagnostic attempts since I drove the car last in October. My plan was to wait until I had the opportunity to drop the car off at my mechanic's, so he could perform the same magic to the engine that he did to the electrical system the last time my car was there.

However, the opportunity arose to take it to a local show, scheduled for today. While pushing it to start practically every time isn't exactly anyone's idea of a relaxing Sunday drive, it would be doable if the car didn't drive any worse than it did last year.

Knowing how things usually go, I thought it wise to go for a test drive a couple days ahead of time, just to make sure no new problems have arisen. So I got my trusty crew together – along with a very lucky guest – and did just that.

The drive went well. That is, if you ignore that it died at an intersection on a main artery. We had to get out and push the car to a nearby parking lot while trying not to get run over. Luckily, the guys in the Accord behind us kept traffic at bay, staying stationary while we got the car off the road.

Or maybe the Accord didn't move because they were busy laughing their heads off.

And before you say it, no I didn't stall it myself – I verified by trying to on a parking lot afterwards, and it's practically impossible to stall!

But other than that, there were no new predicaments, no new problems. Lots of smiles and questions from passers-by. No change in driving feel. Everything went like it did last time.

I was pretty happy at that point. I was actually going to make the show! I even texted a couple friends a pic from the drive, boasting about its success...

I figured I ought to verify this success and went on another drive later that evening. Of course, we had to give it a push first – but it still wouldn't start. We had a look at the battery terminals and one of them, already notorious for not clamping on properly, was loose.

But instead of just tightening it, we loosened it completely, applied some WD40, and then tightened it back up. It held like never before. The Fića then started on its own, on the first attempt.

We may have inadvertently solved – at least a part of – the Fića's starting problem!

So on we went, and the car behaved like it did earlier that day. That is, until we reached a stop sign, where it shut off before I came to a complete halt.

But imagine that – I started it back up without getting out of the car at all! I just twisted the ignition key and drove on... Must've been a hiccup – but then it stalled again at the next stop sign.

We figured out that by pulling the choke lever up before slowing down, it wouldn't stall – but not before we had to push the car through three intersections! The last twenty minutes were in essence a very visceral attempt not to die.

So instead of attending the show, I'm writing this post. I won't be driving the car again until the engine is repaired.


Rolling starts, the engine shutting off when slowing down...clearly, this thing REALLY wants to be a hybrid! I also discovered a couple more things: