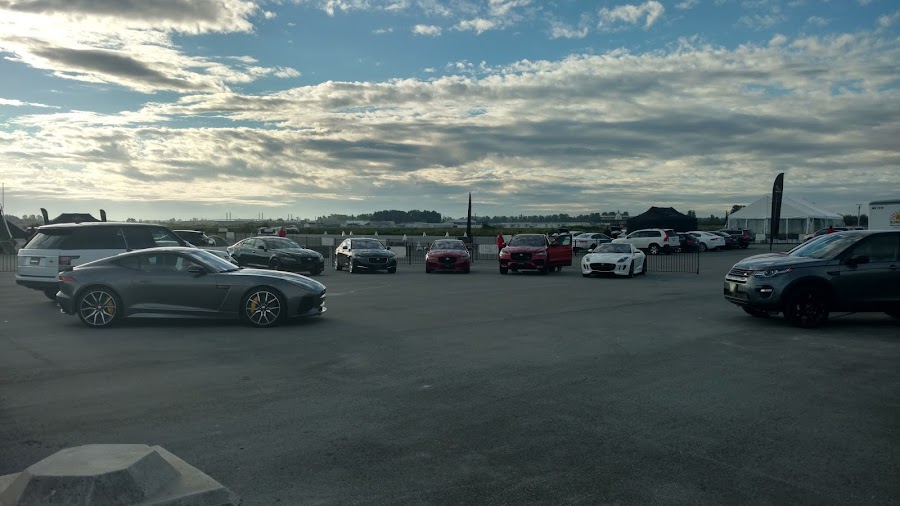 A few months ago, I attended a driving event for the new Jaguar XE and F-Pace. Little did I know we were to be treated to much more than that...

Events like this tend to sorely lack browsing time, but not this one. The first half hour is for checking out the full range of Jaguar and Land Rover vehicles, unlocked and on display, at your own pace. A quick and to-the-point briefing follows, after which we're unleashed on the first of four stations.

You're a passenger in this one. An instructor takes you through an obstacle course in a Range Rover Sport with the diesel V6 and all the off-roading kit, once with the all-terrain driver aids switched off, and once with them on.

First is a 43˚-angle climb up a giant hydraulic ramp... As the Range Rover Sport ascends the 94% grade in low range, the view out the windshield goes from terra firma to sky real quick. It reaches the top with zero drama...but then the ramp tilts and you're suddenly facing straight down.

Mercifully, the descent is just as drama-free. Even so, the entire thing felt like being inside the toy car your three-year-old son is driving up and down the living room wall. Fun, or at least it was for me!

The second obstacle is a low pair of offset, curved ramps, meant to simulate extremely uneven terrain – perfect for showing off suspension articulation. The instructor uses the parking cameras to center the SUV on the ramps, and away we go. No chassis flex at all (human flex is a different story), and the wheels never really lose contact with the ramps, thanks to the electronically-unlocking swaybars. Again, no drama.

Doing the same run again with all the electronics turned on, while fine, feels noticeably less smooth and in-control than the manually-driven run. 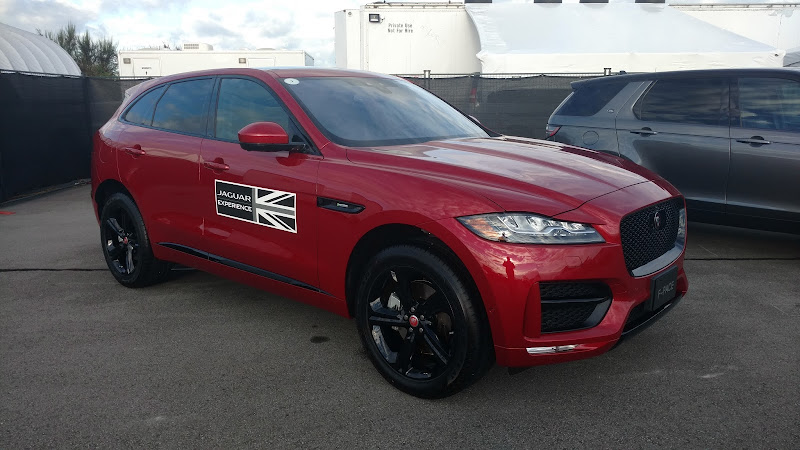 Power into the slalom, stay on the outside of the sweeping left-hander to test the (brake-based) torque vectoring, then accelerate into a 'lane change' and deploy the anchors in the emergency braking box. It's two laps per person in identical F-Paces. The instructors point out some of its systems before everyone gets a third and final lap.

Jaguar claims their first SUV is a true performance choice. I had my doubts. I don't anymore.

Threading the F-Pace between the cones felt like being in a good sports sedan, just with a higher line of sight. Inputs are very precise, throttle application (with the eight-speed-auto in Sport) is quite linear, and handling is tight and composed.

It was undeniably fun. Just don't be in the backseat.

Based on this experience alone, if you want a sports car but need a small SUV, it's either this or the Porsche Macan. 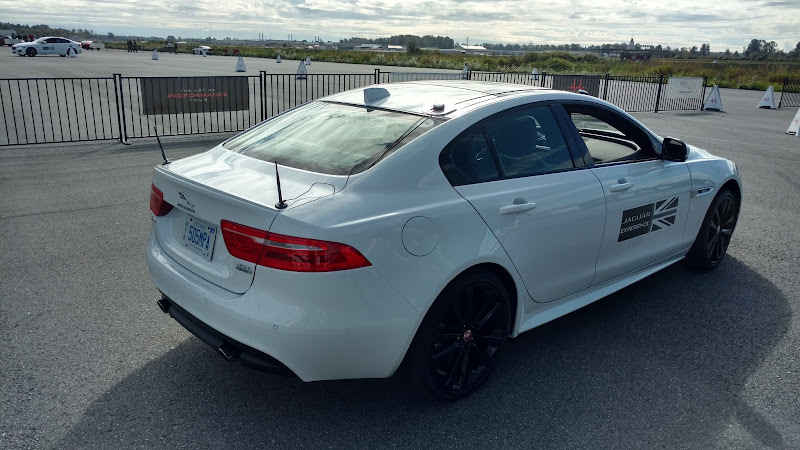 Our first taste of the new XE was on a course designed not to test the car, but the driver...

Pairs of cones with LED lights on top act as 'gates' you drive through, arranged randomly throughout the area. The point is to drive through the gates dead center, in the order that the LED lights indicate, in the least amount of distance. The car has sensors taped to it, tracking your every move.

If that wasn't enough, you only ever know what your next two gates are! (As you pass through gates, subsequent ones are revealed.) Oh, and all this is timed.

So – follow the correct order as it appears, while keeping the car dead center, in the minimum distance and time, for maximum points. It's like an IQ test that involves your motor skills.

Everyone's results are displayed on a giant screen in the adjacent tent – you get a brief practice run before your single attempt to top the leaderboard. An instructor rides shotgun, acting as a rally co-driver of sorts...

I found it fun as soon as I got the hang of it. My result wasn't too shabby, but older drivers generally did the best.

STATION 4: The XE and F-Type 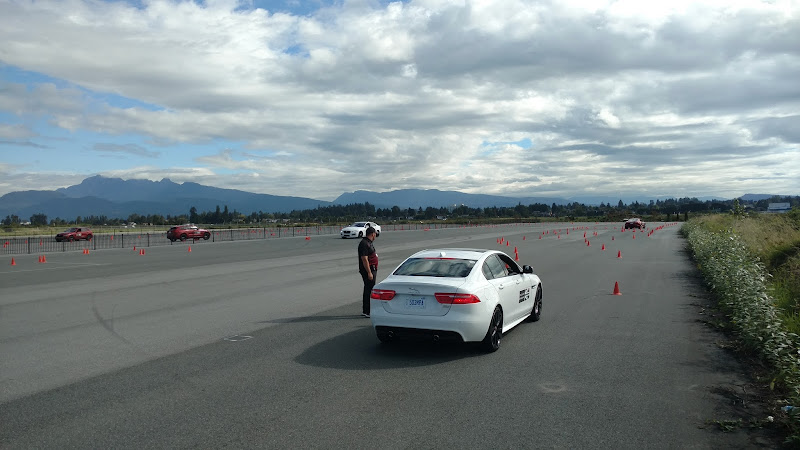 It's two laps per person, per car, on a similar autocross course as with the F-Pace: a few s-curves into a sweeping left-hander, followed by a slalom and a 'high-speed lane change'. We were given XEs identical to the previous station (without the telemetry, obviously). It was here where they revealed the other car on the menu: the all-wheel-drive, V8, F-Type R...

First, the XE. It finds upshifting preferable to power delivery even with the gearlever in Sport. There's zero communication through the steering wheel and pedals, meaning you're blind to understeer until it's too late. When you get no feedback from the car, you can't trust it. And when you can't trust a car, you can't enjoy it – you're constantly worried about overcooking your run even when you shouldn't be. 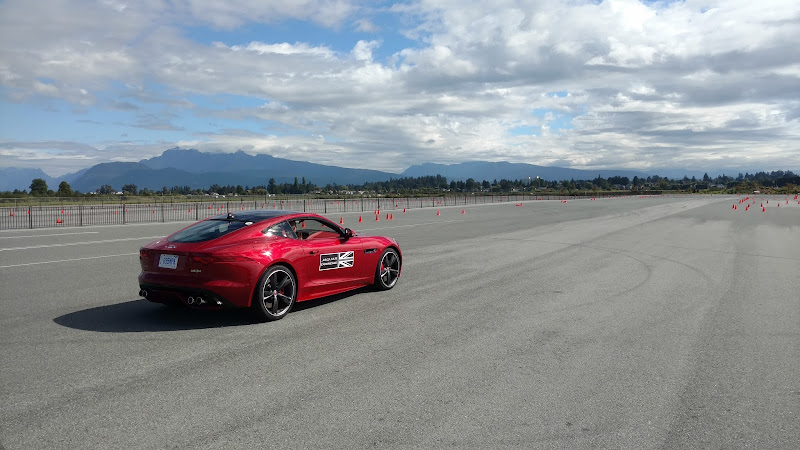 Let's start with the sound. Hearing its V8 on YouTube or something doesn't do it justice – you have to hear it live. But even better than hearing it live is hearing it while it's connected to your right foot.

Mash that pedal and you'll feel some drag-racer squat. Hit the first turn and see how completely flat cornering is – handling is composed, predictable, and confidence-inspiring. The steering actually gives you feedback, despite being an electric rack. You feel equally in-tune with it at low speeds, and at the limit.

After we finish our laps, the instructors take us for acceleration runs in a couple of these beasts. It accelerates strongly and consistently well past the point of 'shouldn't we be braking already?' Some time after that, the instructor applies full brakes and the car seems to stop almost instantly.

Don't overlook the F-Type if you're in the market.

As for the event itself, it was very fun, pleasant, and well-organized.

There was no sense of being rushed, we had refreshments at every turn, and we got solid chances to get to know the cars well. Definitely a good way to spend three hours, and way more valuable than any dealer visit would be.

If it wasn't the best event of this type I've attended thus far, it's pretty close. 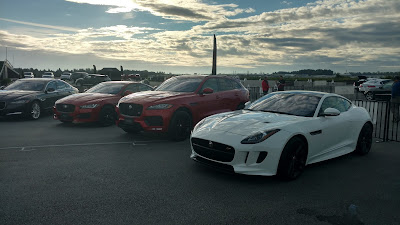 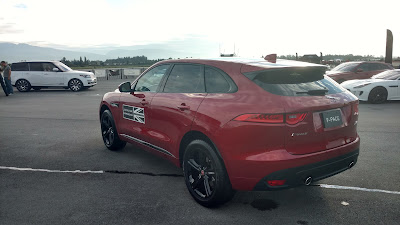 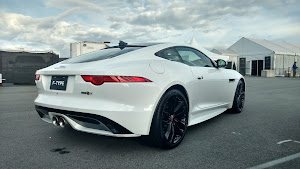 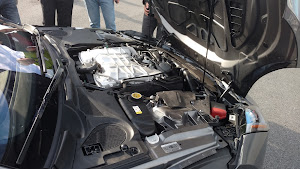 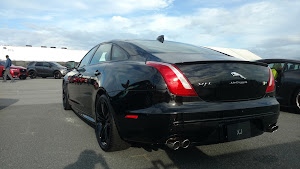