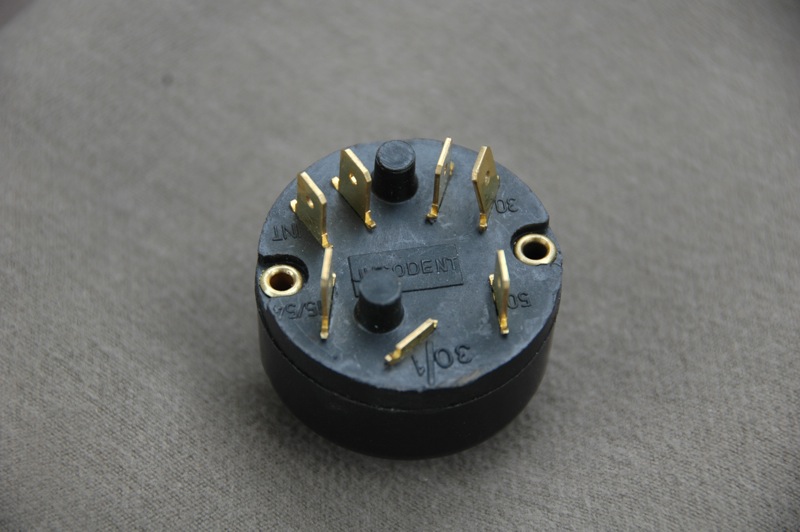 Have a look at the part in the above picture. Don't pay attention to what it looks like, or what surface it's on. Focus on what the part represents.

No, I'm not trying to be poetic, even though it really seems like it. That part represents the possibility of a solved problem – it brings with it new conclusions and an answer to an old question.

I replaced the old one in the Fića with the new one in the above photo – the key just 'clicked' better when turning it in the ignition. The Fića stayed mute.

If you remember, the Fića used to start without too much fuss, provided you knew the secret non-factory handshake.

It also had a habit of shutting off with the use of the turn signal stalk, and even ran with the key removed. The former happens to any car with a low battery charge, and the latter happens to a car whose ignition switch intends to kick the bucket.

Now that turning the key in the ignition does nothing, the battery doesn't get rapidly discharged. So maybe it's not the battery's fault.

To be completely sure, I got out my trusty Multimeter, and measured the battery's state of charge: I got a reading of ~65%. Ideally, a sufficient battery charge is ~75% – though a sufficiently-charged cold battery (that has been in a car sitting outside, for example...) often shows a lower state of charge.

Though, you can never be too sure, which is why I decided to load-test it.

Switching on the high-beams and keeping them on for six minutes does the trick. I didn't do that, however – I let them stay on for seven minutes instead. The battery passed with flying colors! Nothing switched itself off and the battery showed the same state of charge after the test.

It was now time to hand the baton over to the professionals. A simple check-up by a doctor mechanic revealed the cause of the temperamental starting: a loose wire. Furthermore, finding the culprit took only a few minutes.

The mechanic started with the elementary checks, seeing if the ignition switch and starter were getting any electricity. When he was checking out the starter (hidden away in a place you wouldn't expect at first), he saw that the wire coming from the switch was taped on...

Taking the tape off revealed that the wire's contact was made for a completely different car, and doesn't fit the contacts on the Fića's starter! Thus, the wire fell off the starter on its own over time, despite the tape.

He tightened the wire (like in the photo) and the Fića fired up without any hesitation!

The first electrical gremlin has been diagnosed and extinguished! It starts like it should have in the first place, and a new and correct wire contact is to be installed.

The second gremlin, as you'll recall, is that the running lights go on when you press the brake pedal, in lieu of the brake lights.

Or at least it was.

Don't take this as definitive, though – I can't (yet) conclusively say that we've inadvertently extinguished the second gremlin as well, as more tests await before one can be sure. Though, the way things are going, it appears that a creatively-wired ignition system might be what's keeping the gremlins around.