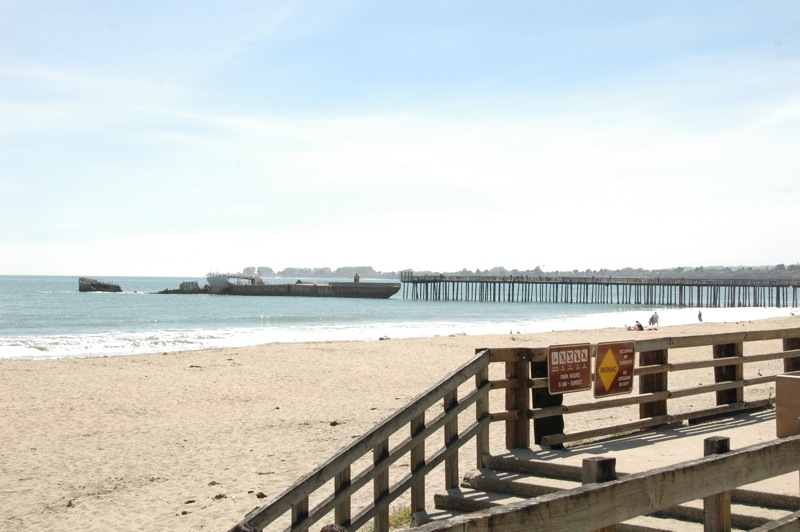 (Remnants of a different time.)
Time is a moody companion. During the first half of the trip – i.e. before Los Angeles – days were endless and well beyond interesting. Now, having left Los Angeles, the return to monotony is becoming ever clearer. At least there will be rowing...

Considering that we have been traveling for twelve days straight, it was time to take a break from taking a break. Fortunately, this was planned for: we are now in Aptos, California, which is essentially a beach community. The activities of the day constituted resting in many forms, including taking advantage of the abundant coastline.

Being California, there is always something interesting to see. On Aptos' coast, besides an old pier full of 'fishermen' with colorful west coast vocabulary, there was the remains of a concrete ship.

Yes, a ship made of the same material and in the same way as skyscrapers. Contrary to popular belief, a concrete ship won't sink immediately; it does work. This one, the SS Palo Alto was built at the end of the first world war and used as a tanker until 1929.

She was then sold and towed to her current location. The pier was built so that people could access the ship, since she was converted into an amusement ship and partially sunk so that her keel rested on the bottom. She featured a dance floor, pool, and cafe.

But two years later, bankruptcy ensued and the ship cracked in the middle. With no money to fix it, let alone keep it going, the Palo Alto was stripped of her fittings and left for the fishermen.

Eventually, the ship was closed to the public and ended up an artificial reef for coastal sea life (and mass avian visitors that contribute to the distinctive smell).

Despite this being a break day, one still must eat. To fulfill this, we visited an old Spanish-era building in nearby Santa Cruz that has now been converted into a mall. Technically. The old rooms now have a different purpose, but the form hasn't changed.

The restaurant in the mall is called "Ristorante Italiano." Guess what kind of food they serve? 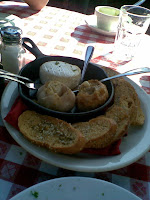 On the table were a variety of cheeses prepared in a number of ways, accompanied by vegetables and baked garlic bulbs. For the main course, there were some pizzas...a margherita and a chicken artichoke to be exact. For dessert, there was ice cream in a wine glass and another good Tiramisu.

The restaurant isn't the absolute best in the entire world, but it is the best in the area by far, and it is easy to see why.

Speaking of food, there is a pond outside the breakfast area of our hotel. A bridge takes you from one side to the other, and the pond itself is filled with dozens of succulent fish. 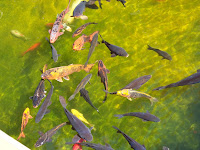 These swimming Hansels and Gretels gang up when there is somebody on the bridge and stick their heads out of the water, preparing their mouths for anything edible that may fall.

With reason there is a "do not feed the fish" sign at the end of the bridge. Considering that the hotel's restaurant mainly serves seafood however, maybe they should take the sign down. It'll save costs...

A fun fact about Aptos: it is located in greater Silicon Valley.

Time to go to bed; there's close to one thousand kilometers to cover tomorrow. 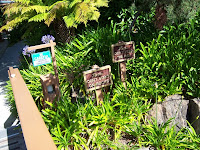