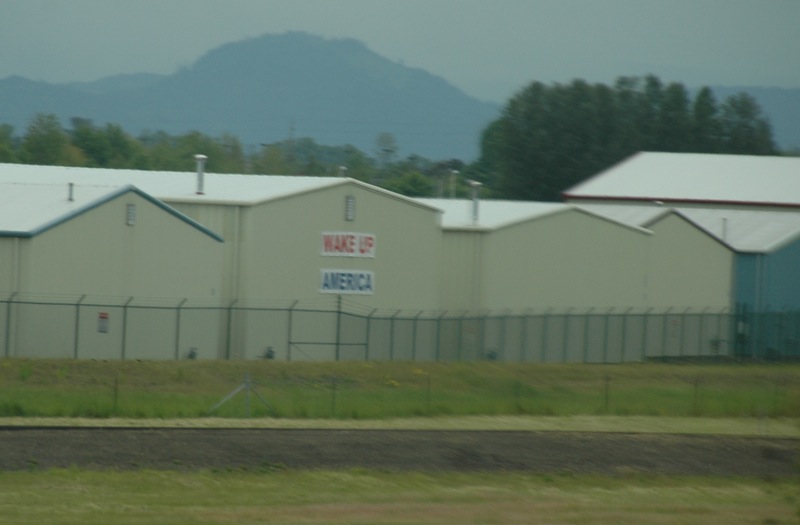 ("America" is subjective.)
Waking up in Roseburg, Oregon meant that today we would eventually be back where we started. Therefore, driving down the I-5 meant getting one last look at the multiple dimensions of Obama-world.

I was surprised at the number of multi-tasking drivers in Oregon. While driving, a lady was reading what appeared to be a novel, a corpulent girl was hacking her iPhone, a man with a mustache was eating ice cream with a spoon, and a soldier was driving the government's van, feet up on the dashboard while talking on his cell phone.

People must be really bored in Oregon.

I was also surprised at the number of "adult shops" across Oregon. So that's what people do here...

All the gray also made a rest stop (almost) flood.

Portland, however, yielded a not-necessarily-life-threatening surprise of its own: there is a gondola over the I-5. As you drive along, you pass under a gondola suspended who knows how many feet up in the air that takes people from one side of the city to the other.

Portland lies practically right on the border with Washington. As a result, many southern Washington residents work in Portland, crossing a bridge daily. That isn't so interesting until you find out that the middle of the bridge is the actual border.

It only got downhill from there, and I'm not referring to any levels of difficulty. The further north one drives into Washington, the more BC plates appear, flaunting their superiorly arrogant driving skills.

Crossing the border itself yielded further disappointment: up north, there are far too few lanes and far too many idiot drivers; I'm only naming the most obvious of apparitions. California traffic may be hectic and bloated, but it makes more sense, for lack of a better description.

Perhaps a better one will come tomorrow, so I will refrain from making conclusions and let the impressions drip for a little bit. When they collect, I'll start writing again.