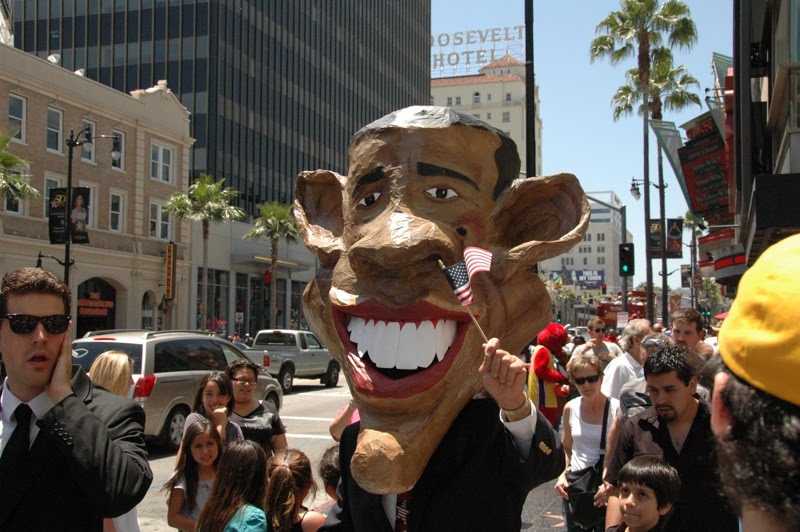 (Turns out his head is much bigger in person...)
Perhaps among the reasons why all rooms of the Queen Mary are not open for exploration is that it would simply be too much to explore in a reasonable amount of time. The whole ship would be very interesting, but there would be too many things to view in one day; one could not see everything during their short stay aboard the liner.

Oddly, this would be a perfect fit for Los Angeles, because it is indescribably huge. Larger still is the amount of attractions that there are to visit. Bus tours last four hours alone! Three days is not enough to see – let alone take in – even half of what LA has to offer.

Therefore, one must prioritize: all of the attractions and photo-ops must be well-filtered, resulting in a shortened list of the most significant of places.

It was in this spirit that we decided to take advantage of having a hotel in Hollywood, and went to find the Hollywood sign. Eventually, there it was, among the houses and viewpoints on Mulholland drive.

From up there, one can see the explosions in Universal studios that were experienced a few days prior. Also, the full extent of LA's smog problem is clearly visible. It is in the form of a constant fog alongside constant sun, denying you sight of anything behind downtown LA's skyscrapers.

Maybe that's why there are Priuses everywhere. I'm not kidding: ever seen three at a small intersection at the same time? The damn things grow on trees here, despite the fact that you'll never help the environment by driving a gas-powered vehicle constantly.

Maybe that's why Priuses haven't made LA's smog go away, despite their all-access HOV-lane passes.

After seeing sasquatch bigfoot the sign, we visited Hollywood boulevard...you know, the one with two thousand stars in the sidewalk.

Contradictions are everywhere to be found in LA: case-in-point: the parking. There is a mall in the middle of Hollywood boulevard featuring a multi-level underground parking complex. Yet, parking is almost free if you go to the visitors' center and have your parking validated, without having spent a cent.

As always, every contradiction makes some sense: since parking is not a multiple of ten dollars, there is more money left to spend in the many souvenir shops while you try to find The Simpsons' star on the walk of fame or while staring at Wonder Woman.

Just don't try to find "Bluce Lee's" star, since a crowd will swamp you the instant that you do. You'll also find out the reasoning behind my creative spelling.

Madame Tussaud's wax museum lies amongst the gift shops – it has one itself, come to think of it – and must be seen. The madame in question was an exceptionally good wax artist, and a vast team of people continue her intricate practices, yielding unbelievably and unmatched life-like results.

Figures can be found anywhere within their display area; this means that anybody is free to come as close as they wish to them. There are even props that people can wear so that they too can pretend to be made of wax.

Madame Tussaud's museum is not exclusive to Hollywood; her museums can be found in various parts of the globe.

President Obama is among the celebrities on display in Hollywood, even having his own picture-taking area. Also, I was surprised at how short most of Hollywood's A-listers are. Most, except a few old ones and the Governator, are well under six feet tall.

Speaking of the Governator, he is featured in Terminator guise, with half his face ripped off, exposing the machinery underneath. One can see what his computer sees on a screen behind him.

I'm sure you haven't read this before: the museum is so good that I won't talk about it anymore, since it must be experienced first-hand.

I will say that there are four levels' worth of wax people to see, including a "red-carpet party," western movie stars, action movie stars, a behind-the-scenes area, and Jackie Chan.

If you don't like crowds, be careful when you visit that last one.

This being LA, fast food is more abundant than air (all the smog doesn't help matters, either), so one will have to eat some sooner or later. However, if you take the due precautions, you can find fast food that will not induce death.

It turned out that they make good food – provided you do not want it dipped in a vat of something – including the salads we got: lettuce, tomatoes, black beans, corn, and tortilla strips, with dressing in a cup, should you be so inclined. However, not all is perfect: the portion pictured is the half portion. There is a "full" one, which is about the size of Jupiter.

Due to the predicament I described at the beginning, it was time to get back on the road. Namely, the famous Pacific Coast Highway, the most prominent driving road on the west coast.

It's easy to see why, since it stretches hundreds of kilometers and is sometimes closer to the waves of the Pacific than beaches are.

The car took us along the road for over six hundred kilometers until we arrived in Aptos, well after the sunset. The PCH is one stretch of asphalt that must be tried a variety of times in a variety of motorized metal cages, preferably when there is no traffic. This is what happens when there is only one road to a popular beach.