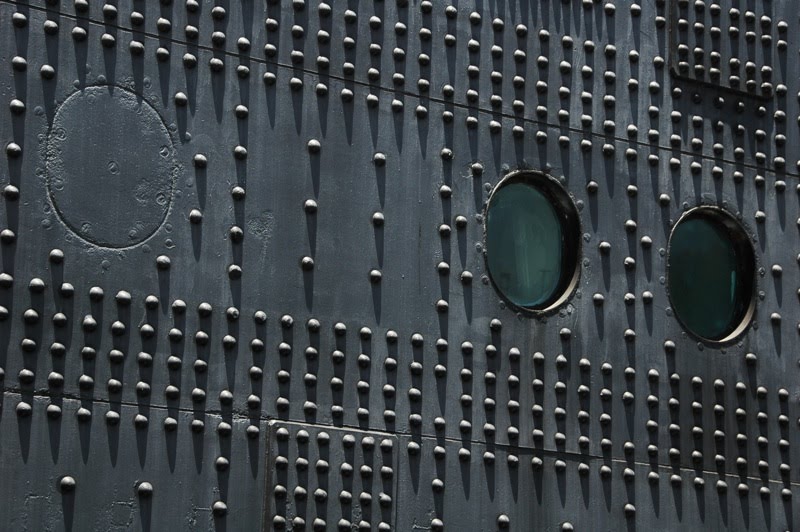 (Rivets galore.)
With the Lego adventure thoroughly fulfilled, it was time to move on to ocean liners. Happily, the Queen Mary is permanently docked in Long Beach, therefore a visit was in order.

It's worth mentioning that if you do not wish to take the freeway to get to Long Beach, you have to drive through Compton. Yes, that Compton.

The Queen Mary was built in 1934 and began her career with Cunard in 1936; she was retired at the end of 1967 and steamed for the last time to Long Beach. She is docked opposite the oil rigs in Long Beach and serves as a floating hotel and tourist attraction.

Now for the inevitable: the QM is longer than the Titanic by less than 140 feet, and taller by an incredible six feet (not including masts). The Titanic was built over twenty years earlier, and it is the reason why the QM – among all other ocean liners – have watertight doors.

Once bought by Long Beach for $3.45 M, the QM's lower half was basically gutted, save half of the engine rooms, to make way for museum areas and office space. Many of the features in the upper half have been moved around if not modified slightly to better accommodate her new purpose.

Despite the fact that the ship isn't completely original, one can still get a good feel as to how it felt to be on board the vessel. Case in point: the original staterooms have not been modified since the liner was sold. Therefore, hotel guests can experience an authentic late-sixties stateroom. It even smells like it did back then...

Except for the most avid of ship fans, I wouldn't recommend paying the premium and staying in the Queen Mary over a modern hotel.

Of course, being a tourist meant the focus was not on the accommodations themselves, but the entire experience of the ship. What better way to do this than finding out first-hand if all of the ghost stories are true?

Yes, there have been a vast assortment of ghost sightings aboard the immovable vessel over the years, not limited to poltergeist activity and vortexes. Our ghost experiences tour guide mentioned that they are the spirits of those who suddenly died on the ship, like when it ran over the HMS Curacoa, splitting it in half and killing thirty.

After a brief educational video, the guide took us through a hidden passageway into the dark, un-renovated depths of the ship.

The first stop was the pool, which has been drained for over thirty years, yet puddles of water on the bottom periodically appear. They say that one of the doors to the female change-rooms is a vortex.

In the middle of the description, all of the lights go out and ghosts begin to wreak havoc.

Once the danger had passed and some kids' heads had exploded, we were led through a bloody stairway to an elevator, taking us down to the gutted boiler rooms at the very bottom of the ship.

The boilers were removed by Long Beach despite the fact that they weren't in the way of anything... Some pipes remain, however, with which poltergeists like to make steam explosions, despite no boilers. We witnessed one such explosion.

Then we went into the prow; specifically, into the area that sliced the HMS Curacoa in half. They showed us the weld marks from the repair, then water began to burst into the ship from both sides.

Somehow, we escaped and took another elevator up where our tour was ended. It was then time to explore the ship.

Most of the decks are open to the public to comb over, however only portions of the bottom half of existing decks are accessible.

Within these boundaries, we explored from bridge to engine room. Since this is an ocean liner, the engine is so big that you can effectively walk through it. One also gets to explore the accommodations, the control areas like the wheelhouse, wireless room (which is still in use), and the promenades, among other areas.

Besides the areas that have been kept original, added areas like the landlubber restaurants and gift shops that plague the ship can also be explored. The liner hasn't been very well maintained over the years either. The exterior deck planks, for example, are bare and worn instead of being varnished and shiny, like they once were and still should be.

One interesting tourist addition is the entrance itself of the self-guided tour, which features the anchor (ironically now in the stern) and a large-scale model of the Titanic, cut lengthwise to show a fully-built interior. To give you an idea of the size, the model is well over twelve feet long.

There are also models of the Lusitania and Normandie, also in the same scale and featuring a full interior.

Another interesting exhibit is the anti-aircraft gun on the forward deck. During World War Two, the Queen Mary was used as a troop ship, and therefore needed some protection in the form of firepower. None were ever fired in anger, and the last of the guns were removed by the end of the forties. One has been returned, and you can climb all over it.

A fun fact: remember that Russian submarine that was docked in New Westminster? Its twin is here, right beside the Queen Mary! New West's former sub is now part of the San Diego Maritime Museum's collection.

This ocean liner is yet another attraction that will subtract most of your day, so be prepared. After seeing everything that there was to see, we dropped by Long Beach itself to take in the sights.

After a beach-side stroll, we decided to see how Hollywood does Argentinian food. The restaurant that we visited was a walk from the hotel and was actually run by Argentines. We sampled a tortilla soup, which contains a variety of vegetables and tortilla strips. Let's just say that another recipe hunt is in order.

The rest of the menu was good, but not as innovative. Among the takings were an Argentine-style ham-and-cheese sandwich – the ham is replaced by something off the grill and there is as much chimichurri as you'd ever want – and the familiar pechuga de pollo.

Dessert was flan, Hollywood style, meaning that it is garnished much more than the original; this was accompanied by an American portion of a double espresso. The conclusion: Hollywood can do Argentinian food, but being Hollywood, it's not the real thing completely, thus it can never be as good.

I'd go back to San Diego tomorrow, but the time in LA is not up yet, and there is still much to see. 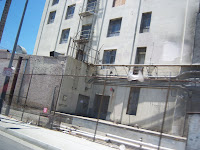 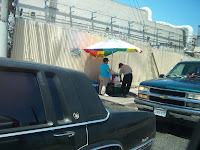 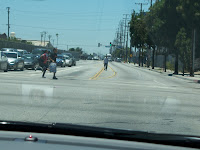 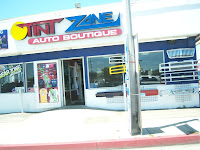 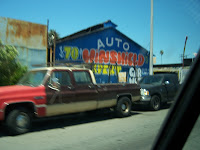