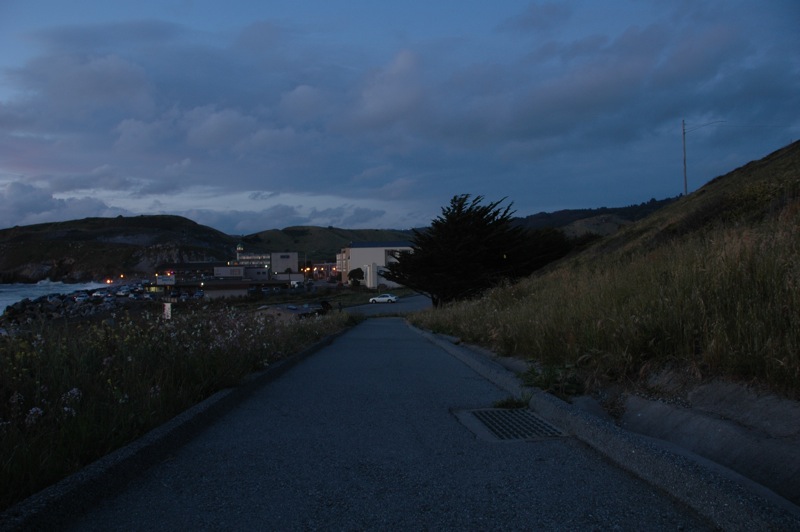 (San Francisco's Pacific coast.)
Waking up at the crack of dawn (or what felt like it), we had the very basic continental breakfast and prepared to leave Oregon. What we didn't know was that Oregon was not done with us just yet. 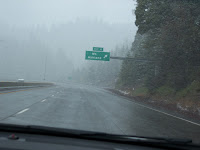 As we distanced ourselves from Medford, we got attacked by a wave of snow. From incredible sun to unbelievable rain to a light snowstorm just outside California!

By the time we crossed the state line, the weather got brighter, though the rain was constantly switched on/off until we reached a town between Sacramento and San Francisco, where the streets were literally flooded.

San Francisco wasn't very far away at that point, at least on paper. People went slowly because of the adverse weather, and with the end of the falling buckets came an increase in speed.

Or at least I'd like for that to have happened. In reality, no cars at all were actually moving. I was in shock at the magnitude of the traffic jam until I saw the source of all this evil: a toll. And not just any toll, but one with twenty lanes. One would think that so many lanes would help alleviate traffic, however all but two were completely full!

To make things even worse, those twenty lanes merged into six after the toll, along with several others that came from elsewhere.

After about two years, traffic started to move again as we approached the Bay Bridge. Fortunately, traffic thinned out after the bridge was crossed and we reached our San Francisco hotel, right on the Pacific coast.

After taking in some movie-like natural scenery, we went for dinner in the Italian restaurant attached to the hotel itself. The menu has absolutely everything you could ever imagine it might eventually have: there were forty different types of risotto alone! The dollar amount asked for each plate was reflective of the menu's variety: excessive for the sake of being excessive. However, you do get what you pay for...

Not here you don't. The "minestrone" was canned tomato soup with fist-sized vegetable chunks within, and I could make better cannelloni blindfolded. The service wasn't exactly lightning-fast either, despite the fact that the establishment wasn't in any way full.

So the restaurant can be summed up like this: you can order absolutely anything you want, it has everything. The trouble is that none of it is done properly; none of it is any good. And it seems to be like this with all of California as well.

Your options are absolutely limitless here; you can do anything mostly because absolutely everything exists. But when you have everything, what is there to look forward to?

Who do you become when you have absolutely everything? Logic would say that you won't even know yourself. After a walk along the coast, this seemed to be exactly the case.

Walking by a parking lot facing the restless waves of the Pacific, I encountered a handful of spaced-out cars occupied by only one person each, either sleeping, talking on the phone, or just staring at the waves, contemplating their fate.

After an hour's walk, I passed by the same lot again, and only two cars had left in the meantime. The rest were still doing exactly the same thing, and there was a new one that joined them: a man who's only missing a big texan cowboy hat (gray mustache and all) sitting inside a Scion tC parked across three parking spaces, engine running, lights off, window open, and a completely lost facial expression.

When he saw us, I couldn't tell if he was more perplexed by seeing us actually walking, or by seeing a group of people doing something together. At least the cats here know what they're doing.

Welcome to California, where the barefoot, unwashed masses sacrifice everything to look like a big shot. Listen carefully to "Hotel California" and you'll know what I mean.