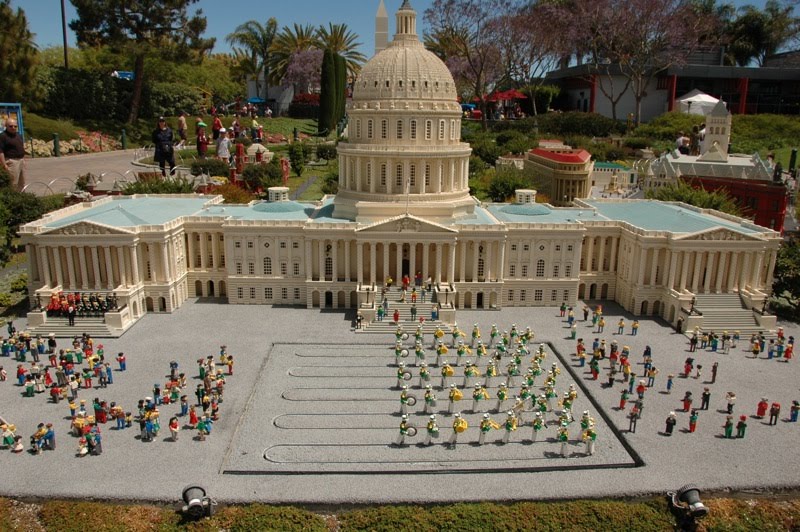 (Capitol hill, smaller than it tends to be.)
We went to Legoland.

As you go down Legoland Drive, you pass huge Lego letters spelling out a welcome message, ending at the toll booths. Yes, like San Francisco's bridges, Legoland has toll booths, where you must pay parking.

Among the parking options is "Volvo VIP Parking." If you drive to the park in any Volvo, you get a VIP parking pass for the Volvo parking area; the 20 closest spots in the first row are reserved for Volvos only. I'm not joking in the least bit.

The Lego Volvo XC90 that was on display outside the gates since 2004 has been replaced with a real XC60, but the Lego family exiting it remains. It too is parked in a Volvos-only spot...

They recently opened an aquarium right next to Legoland itself, and admission to both can be paid in the Legoland booth. Thanks to the internet, both were free.

As you can imagine, everything that isn't made out of Lego is made to resemble it. "Blockoland" from The Simpsons is not at all an exaggeration. The only difference is that the real Legoland doesn't need to be taken down at night, since all of the plastic bricks used are either glazed or have a tape-like film over them.

Inside the park, there are several places to go, but they can be summed up: gift shops, places to buy food, amusement park rides, water-parks, both, exhibits, a golf course, a driving center, tours, and mini-America. 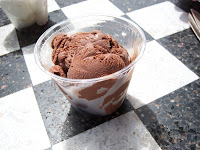 The majority of the park is in an amusement park style, with a Lego theme. Besides this unique look, it's just like any other American theme park. The same can be said for the food. Ice cream, for example, is available in a single and double size. The one pictured is the single...did I mention San Diego has much more fat people? 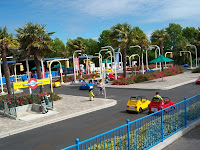 The driving center, where kids drive around the little town and then get Legoland drivers' licenses, is a very good indicator of future driving habits... In the waiting area, there is a real XC90, split in half to show its insides.

The tours featured are a fifteen-minute boat tour around the park and a sky tour, on a pedal car riding on sky-high tracks. This gives you a nice aerial view of the entire park. Both are recommended. 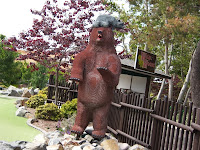 There is a small bit of nature filled with Lego animals. Some are quite well hidden, but all very convincing. In traditional Lego fashion, none of the Lego displays are without an appropriate dose of humor, even in nature: a raccoon can be seen riding on the head a bear, who's not very happy about that.

Every so often, there are life-size people built out of Lego reflecting the theme of the area. Most of them can talk and move as well. I think I even heard one of them comment about my shoes...

The average individual Lego structure is made of about 100,000 bricks. Structures compose the main attraction of the park: miniland.

It is, in a word, epic. You have miniature versions of New England, The Strip in Las Vegas, Daytona Speedway, New York, San Francisco, New Orleans, southern California, Washington DC, and Ferndale.

The cities aren't exact replicas, but are compilations of the most notable parts of each featured region. Las Vegas even has a paved strip you walk along to observe the models!

There is loads of humor and hidden details. I could write four times as much about all of this, but I'll leave it to the pictures.

Right outside the kids' driving center is the second Lego XC90. Both are made of over 200,000 bricks, lie on a real chassis and wheels, and weigh almost as much as the real thing.

We visited the Sea-Life aquarium next, which features marine exhibits mixed in with Lego figures, from divers and subs, to surfers on the coast. It's essentially a watery miniature version of Legoland without all the rides and better food. It also features a tunnel like in San Francisco, where you walk through – and later observe from many different angles – the lost city of Atlantis. 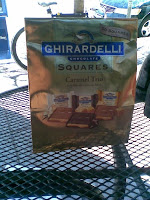 Do not underestimate the power of Lego: if you visit the park, you will spend all day inside, whether you planned to or not.

A side note: did you know Costco makes its own alcohol? There's Kirkland vodka and pre-mixed margaritas, among other things. Also, there is a bag of Ghirardelli chocolates available in Costco, even though it was located in San Diego...

So then, enough text: enjoy the pictures! 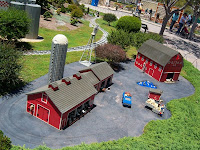 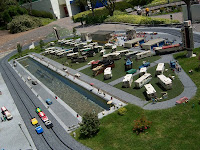 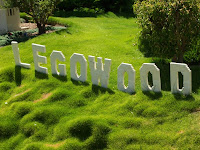 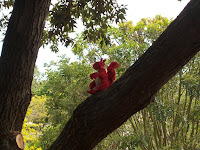 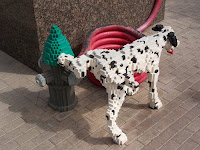