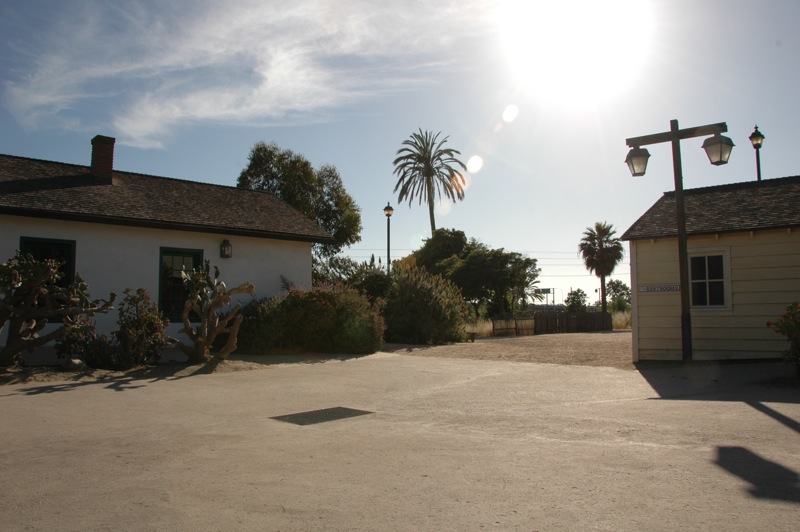 (San Diego, as it once was.)
Things are never as one expects. We woke up in Bakersfield, the second 'stopover city' in this road trip, and a phenomenon has repeated itself: the hotel was exceptional...the smaller towns have a more than competitive offering.

But some things are as expected. The more southbound miles the car ate up, the better the weather got, and the more the landscape morphs from green plains into desert terrain. There were still the exposed rolling hills, an increasing amount of burnt grass, and the occasional agricultural plot.

Parts of the I-5 flow around the hills, others are right on the water, and every so often it is adorned with rather elaborate rest stops. Most are quite well taken care of, and their washrooms rival some people's houses...

Some of them feature epic oceanside views that even your car can take in. One such stop had a vibrant resident animal population that set up a toll there; I believe the price was a chunk of bread. The animals worked together to enforce their toll despite being different species. Must have been the influence of the Marines' compound next door.

Driving through Los Angeles, the automobiles became as diverse: among the commuters was a pre-production car, a prison bus, and a man in a pickup flaunting both a cigar and mustache that are larger than his vehicle.

One pickup driver in particular blatantly advertised that he was a Greenpeace fanatic, breaking the stereotype... Semi trucks are a permanent fixture from the Canadian border onwards. It is after spending as much time on the road as truckers do does one understand their unique way of thinking.

Among the most numerous out-of-state license plates were Arizona, Texas, Florida, Washington, and Oregon. Unlike at Seattle Premium Outlets, BC plates are a rare sight this far away from Peace Arch. All U-Haul trucks were registered in precisely none of these states. Seems as if everybody who does not live on the west coast wants to.

The concrete freeways continued, sprouting up to seven lanes in each direction. Concrete does not deform over time from heat and it is also grooved parallel to the traffic flow, seemingly to increase traction in the wet by almost eliminating hydroplaning unless there is a flood. All road markings are three-dimensional, being always visible rain or shine. Sounds useful...hint, hint.

Arrival in San Diego revealed some facts: the hotel is quite akin to those in Mediterranean countries, having an open layout and being bathed in sunlight. Also, apart from a few formalities, San Diego is basically in Mexico. It looks and feels like it, besides the parts that feel very much like Florida. There are even taxis that cross the border so often that they have both Baja California and California license plates at the same time.

After settling in, we visited San Diego's Old Town, the last remaining complete area of the city as it was over one hundred and fifty years ago. It contains a vast array of still-functioning shops and restaurants. The rest of the Old Town's buildings are now museums of their former selves.

One such building was the Estudillo house: José María Estudillo built an Adobe house himself for his family. It was restored some decades ago from a rather dilapidated state. All of the original Spanish-era buildings in the town are Adobe buildings: bricks are made from sand, clay, water, and organic material, and are sun-baked in moulds for thirty days. Then, a house is built with them, which is covered in plaster to prevent erosion.

Parts of the town feel like a western movie, and rightly so since Old Town was the home of Wyatt Earp. Other parts appropriately feel like Zorro is about to swoop down from somewhere, even though his home was Spanish-era Los Angeles. All of the restaurants are Mexican, built in either the style of the town, or in the style of south-of-the-border.

Speaking of food, it became time to find some. Having learned something valuable in San Francisco, we pointed ourselves toward San Diego's downtown to find Little Italy. All of the good restaurants are on one single street, ironically named India Street. Among the Italian establishments, we found an Argentine restaurant. Guess where we went?

Puerto "La Boca" lies across from two Italian restaurants and one Italian deli and grocery store. However, this is not at all strange, since the largest group of non-Spaniards that settled in Argentina were Italians.

It is elegantly decorated, with wine racks surrounding the tables bathed in a low light; the style is of course very Argentine. A single waiter (could be the owner) greets you and brings the entire restaurant food along with an assistant waiter. The menu is, once again, decisive and very tempting. 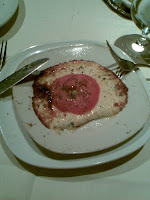 We sampled the empanadas (how could we not?), the matambre (below), and the provoletta (left) as appetizers. The empanadas are pastries stuffed with your choice of ingredients, from ham and cheese to spinach. They are one of the quintessential Argentine foods, so much that they were the only thing that the party of Argentines closest to us ordered.

Matambre is literally translated as "hunger killer," and the name is very appropriate. 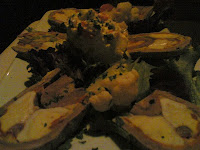 It is a meat roll stuffed with carrots, spinach, and boiled eggs, served cold. It came with a mashed potato salad and green adornments. Provoletta is a wheel of provolone cheese grilled quickly and topped with a tomato slice.

For the main course, pechuga de pollo de la parilla and brocheta mixta were on the table. "Pechuga de pollo" means chicken breast, and "parilla" means grill...it is proof that simple things can be among the very best. Brocheta mixta was beef, chicken, peppers, onions, and bacon grilled in a shish-kebab format; both the main courses can be ordered with a side of mashed potatoes or fries. The latter was chosen, and their taste was consistent with the rest of the dish. If you haven't already given up fast food, you will after trying these fries...

Olive oil and chimichurri sauce was served with bread slices for both the appetizer and main course. Chimichurri is a sauce made from a mixture of various ingredients, making it sour and spicy at the same time. It is quite versatile as well, as it can be comfortably eaten with just about everything. 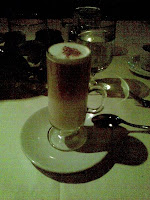 For dessert, we ordered panqueques con dulce de leche and tarta de manzana con helado de vainilla. The former are pancakes, but European style: thin and slightly stretchy. These were filled with Argentina's famous milk-based 'caramel.' The tarta was the familiar German style apple pie (guess what the second biggest non-Spaniard immigrant group in Argentina is?) with a large scoop of Italian vanilla ice cream and a puff of whipped cream. Naturally, these couldn't be had without some espressos and a cappuccino, Argentina-style (pictured).

Sounds expensive? Don't jump to conclusions. Many of Vancouver's restaurants cost more even though their food cannot even compare. Regarding the taste, I shall sum up everything in one single word: exquicito.

The ambient is much more civilized than what's customary on this continent as well. People come here not to just fill up their love handles, but to hang out, to spend time with people they know. The restaurant keepers never forget that they are running a restaurant and not a convenience store, since you can stay for four hours if you so desire and they won't see it a problem. In fact, that is expected; you might even get the evil eye if you just stuff your face and book it.

Our hotel in San Diego has the best internet service so far in the trip, so I've taken full advantage and added all of the pictures that were missing in previous entries.