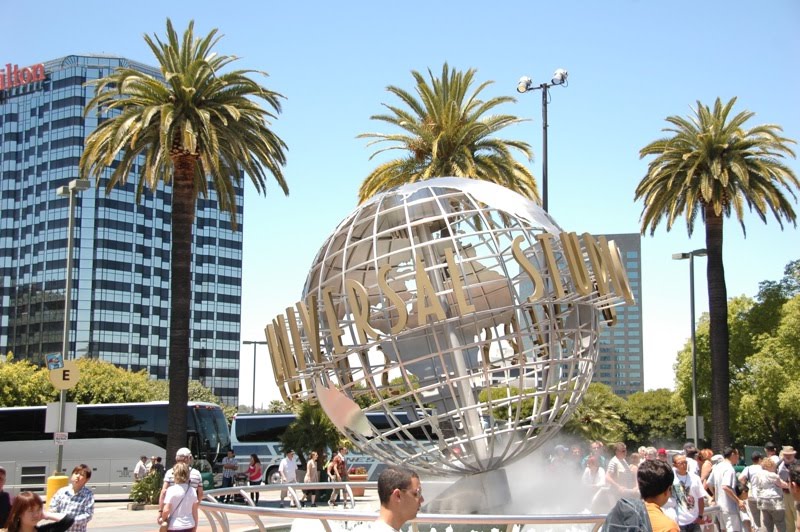 (Tan-ta-da-da-da-da-daaaaa!)
The first day in Los Angeles started out in front of the hotel room, which has french doors in the back that open up to some lounge chairs by the pool. Like San Diego, it feels like you are in a Mediterranean resort, though in its own way. The thirty-two degree weather helped achieve the effect as well.

After some sun soaking, we drove for a bit to do some more. However, the scenery was different since it was at Universal Studios. There is a toll, like in Legoland, but preferred parking this time around was different. You could pay $14 to park in the shady parkade or pay $20 to park in the sun by the entrance.

"VIP" parking loses this time around.

When you exit the parkade, the benefits are greater still: the passageway leads directly to the Universal City mall, outside of the studios' boundaries. Imagine Las Vegas' lights mixed with good stores with a movie theme and you'll have the general idea.

At the end of the mall is the famous Universal Studios globe facing the entrance gates. When you cross them, you begin to notice theme music playing; that is because there is theme music everywhere, even in the washrooms!

Being an American park, there are a bunch of themed roller-coasters. The more unique stuff is what's interesting though.

The day-starter was the studio tour: after waiting in line, you get on a bus-train (tram?), which takes you around the actual studios that Universal uses for filming. Among the sets seen are The Fast and the Furious, Desperate Housewives, Jaws, CSI, The Grinch (Whoville)...well, there's no need for me to list them since none are actually permanently used for that purpose.

Each set can be re-masked to resemble any idea or location. They are constructed to look slightly generic so that changes can easily be applied over and over. There is a "New York," which is the set for any scenes in a downtown setting. There is an "old Mexico," which is used for any Latin American town; then there is "six-point Texas," a set in old-west style that has six mini-towns in one big one. As a result, six westerns can be filmed at the same time.

The lake from Jaws was one, Wysteria Lane was another, "Europe Street" yet another; that last one can be made to look like any location on the planet. None of the buildings actually have anything inside nor are the materials real; they are all facades.

99% of interior scenes are filmed in sound stages, which are the ones that look like warehouses. They are also extremely flexible, and you'd be surprised to learn what convincing scenes have in fact been filmed in a sound stage.

Weather effects can be created at the touch of a button. So can gunfire and real explosions, among so many other things. The tour led us through one "sound stage" which was set up for a film "due in 2012;" they never named it, but movie buffs can "figure out" that it is in fact the "upcoming remake" of the classic movie "Earthquake."

Some sets cannot be re-used so easily. One such set is the non-CGI portion of Whoville, which is completely made of foam and fake snow. Another is the crash site from The War of the Worlds; it is incredibly well done, partially because it is completely real. That is a real 747, broken by 'demolition artists,' those are real crushed and burned cars, and that is real debris. I hope this is a permanent exhibit on the tour. 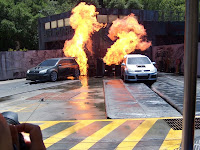 At various points in the tour, there were "unexpected occurrences;" we experienced explosions in the Fast and the Furious Tokyo Drift set, a flash flood in a Guatemalan village, dividing water in a lake, a cursed Egyptian tunnel, and an Earthquake in San Francisco. Here, pictures were not good enough, so I took some videos.

Back in the park itself, Universal hosts a variety of shows based on recent films; it has existed since a bit after the turn of the twentieth century. The most notable ones are the Terminator and Waterworld. You know the feeling when you're watching a movie and you'd like to go through the screen and watch from within? That is exactly what Universal lets you do with these shows.

The Terminator show is a presentation by Cyberdyne gone wrong, and Waterworld's show is a war in an Atoll. I won't reveal any more, other than that there is a lot of epic special effects. If you want to find out more, you need to see it for yourself. Regrets are impossible.

The actors in the shows are real Hollywood actors; no "A-listers" though.

All parts of the studio park are in themes: there is a mini-France, London, Springfield, 50's USA, New York, Jurassic Park, Egypt, Cowboy Western, Shrek-ville, old Mexico, Red Light District (just kidding), and probably a few others I can't remember at the moment.

As in Legoland, plan to spend the entire day here, since you inevitably will. Then, you'll also need to eat something. If you don't feel like killing yourself, eat at the International Cafe, located in mini-France by the trained animal theater.

There will be no lineups as well, since all of the fat people are busy cashing in their all-you-can-eat coupons at El Pollo Loco. 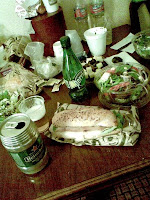 We had some Italian subs with a very rich and varied salad, with Dijon mustard and yesterday's Chimichurri. On the side was a serving of cheese and grapes, plus a mini-keg of Heineken and a little Perrier. It's cheaper than it sounds, too.

On the subject of prices, if you're a CAA member, everything you buy within the complex is ten percent off. On the flip side, in LA proper, every fourth car costs over $100,000, and there are a lot of Volvos everywhere.

More fun facts: in LA, the rule of thumb is that intelligence goes down as mass increases; I barely spoke any English all day; it was twenty-four degrees at the time of this posting.

All that and more tomorrow.

(Does this look familiar? There were dancers in this one too!)