(Pelican's Lair, from the hills of San Francisco.)
Funny how things change after a little bit of time.

Having completed yesterday's tour allowed today's touristic wandering to be more decisive. Due to the respective management's thirst for tourist blood, the Pelican tour will have to wait for another opportunity; the rest of San Francisco, however, was all ours.

Today, we returned to Pier 39 and its ample and fully automated garage. Pier 39 is basically a mini-village of stores and attractions made out of what was once a dock, as the name suggests. The San Francisco aquarium was first on the list.

The aquarium is rather atypical: when you enter, it seems relatively standard. There are several big vertical glass tubes that fish play Nascar in. There is a regular tank too, but it is filled with careless garbage. The idea is to show what the US' wasteful nature is doing to the marine life. There's even a kitchen bathroom sink in there...

The "aquarians" do know what they're doing though, since that's the first of the surprises: Right outside the garbage tank, there are some elevators that take you down into the next stage.

A naturalist awaits inside (not nudist; they weren't that creative) and explains what is up next. Gobs of jellyfish first welcome visitors.

There is a sign which reveals that they are 95% water, and that they eat each other; such information signs adorn every individual exhibit, answering any questions you may have. If they don't satisfy, there are knowledgeable staff on hand as well.

But that's not the main attraction here. When you finish with the jellyfish tanks, you become the one in a glass tube. It's horizontal this time, forming a tunnel under a live replica of the San Francisco bay. You are effectively walking under water, surrounded by more sea-life than you thought existed.

I'm not kidding here: ever seen a shark that looks like a cat? How about a fish that can change gender at will? Of course you haven't, which is precisely why you should come here and visit the aquarium.

There are two of these tunnels, each quite long and quite interesting. Nowhere else (short of actually diving) is the opportunity to get so close to such a variety of marine life offered. Nowhere else can a manta ray glide an inch over your head or an octopus make faces at you.

How do the sharks not eat all the yummy fish swimming around them? The resident diver team feeds all of the creatures regularly, so they never experience the need to convert their neighbors into nutrients.

The aquarium even lets you touch the creatures. Between the two tunnels, there are simulated octopus parts you can fondle, and after the tunnels, the elevator takes you up to the touch pools, where you can let one of your digits make contact with a live shark, ray, or snake.

Not eel, but snake; that section features some non-sea animals that can also be found in this part of California. All except the King Snake cannot be touched though; these include the chinchillas, tarantulas, turtles, frogs, starfish, and hedgehogs.

I bet you never knew that a chinchilla poops over 200 times a day.

If you do not wish to buy aquarium-related merchandise, that concludes their offering. Not modest by any standards.

The next stop was Pier 39 itself, which contains more various food stores than SF does people. The most noteworthy of them are the Ghirardelli "chocolate heaven," and the Boudin bakeries.

Ghirardelli has been around for so long that it has its own square in the city. For good reason too, since their chocolate is simply epic. Think of the best chocolate you've tried and multiply the excellence by a thousand. 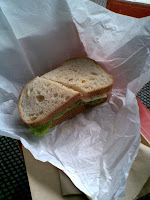 Boudin is also something native to San Francisco that has been around for about as long as the city itself. It is the birthplace of sourdough bread, though they make all sorts of bread in about a billion traditional shapes and varieties, as well as in the shapes of teddy bears, turtles, crocodiles, and other living creatures. The sizes of these range from small loaf-sized to life-sized. There are of course normal things as well, like German-style sandwiches.

All I will say about the taste of the sourdough is that it is not intrusive in the least bit; if your only association with sourdough is Safeway's, teleport to San Francisco and re-educate yourself. Make sure to bring a nice jumbo cooler too, as you'll be stockpiling all this stuff for home consumption.

After a nice lunch courtesy of both the mentioned SF relics, we made our way through Fisherman's Wharf to the cable car. We rode it to Lombard street (you know, the twisty one) and took in the sensible lunacy of the place.

San Francisco is itself completely backwards, and that is precisely what gives it its charm. The famous snake-like block of Lombard street is the concentrated and bottled essence of the entire city. All of San Francisco's timeless lunacies (not the more modern, 'alternative lifestyle' ones) are vibrantly expressed in this one area.

Some things you likely didn't know about the windy, windy, windy, windy street: huge vehicles are prohibited, but it's not as tight as it may seem; full-size pickups can take its famous corners without any problems. The street is full of driveways, and there is even an intersection in the middle of it!

The pedestrian walkway is almost completely straight, and has both a regular sloped walkway and a light staircase going together all the way down (or up). The curvy section is one way (downhill), and like the cable car, people use it just as normally as the street's non-famous counterparts.

The fact that San Francisco is completely made on hills yields other benefits besides car-chase-friendly slopes and streets modeled after intestines: there are no fat people.

The reasoning is simple: you have to walk everywhere since transit is always packed and there is nowhere to park your car. Even if you use transit, you need to be strong enough to both get on and hold on. So then the only fat people are tourists, since the residents must climb every time they exit their vertical houses. Even the entrances to the houses always have stairs, as most houses' ground floors are completely occupied by garages.

Every car has a parking permit stuck to the left corner of the rear bumper; all of the non-metered street parking in the city has signs indicating which type of pass-holder can park their car there, and if you have not taken out a pass, you cannot park. The passes are assigned to a license plate, so forget about saving money and using the same pass for multiple cars.

Walking through town, one cannot help but marvel at the state of the houses: all are well-kept, exceptionally beautiful, exceptionally creative, and maximally urban. The entire city and its inhabitants are also very urbanized (no 'villagers' here): houses are tall, narrow, and there are about a hundred per block, with some houses having from two to five separate houses within themselves.

Entrances are commonly through gates that reside in front of stairs leading to the actual front door (think Buenos Aires or Belgrade).

If there are no garages on the ground floor, there are various shops in their stead.

Driveways do not exist; there is just a slope in the edge of the sidewalk, over which you must drive to get to your garage...should you be so lucky, of course, despite the fact that every house has one. Apparently, there is a municipal law stating that you must park within two inches of any cars around you.

If a street looks like it's about to end, there's probably a long treed staircase hidden somewhere to allow you to continue moving forward. Rolling metal cages and fleshy organ bags can coexist like kittens; should you like the downhill view from the crosswalk, for example, just stop in the middle and take a relaxed picture. Chances are that you won't get run over.

Bus stops also do not exist; instead, buses just stop at the corners of intersections and let you on or off just like that. Cable cars stop in the middle of intersections, during which time, other vehicles are forbidden from all movement until the cable car goes away. Should you want to get on a cable car, simply wait at the corner for one to arrive and flag down the operators. If the car is not full, he'll stop and let you on.

If it looks full, do not worry, since it isn't. There is usually space left over to hang off the side...just don't climb up on the roof. The cable propelling the car is always moving underground, and the car simply "grabs on" when it wants to go, just like the rope tow at a ski hill.

If you cannot make it to a Latin American country but desire to immerse yourself in Spanish-speaking culture, simply drop down to SF. Do not believe the stereotypes, as Spanish is effectively more common than English. However, do not be surprised if every once in a while you notice the faint smell of marijuana in the air. Some stereotypes do stem from truth, after all.

Once you cross over from the hilly residential streets into the 'downtown' area, the first district you enter is the Italian one. There are no 'guidos' here though, since this is a real Italian quarter. Here, the mafiosos are replaced with believers of the concept of bella figura. The center of the district is an exquisite Catholic church overlooking one of the city's famous parks.

Having been so cheated by that horrendous first "restaurant," we searched to find the real thing. A German man at one of the city's tourist centers gave us the business card of arguably the best and most authentic place on the west coast.

It was precisely for this reason that we ventured into 'little Italy,' and good thing that we did. Vicoletto is on the corner of Green street and a narrow street that looks like an alley to the uneducated. It has a patio consisting of tables on the sidewalk, and the interior is tastefully modest, decorated with vase-lamps and small tiles (sounding European yet?).

The door is closed but always unlocked, and the glass that surrounds it boasts newspaper articles and certificates depicting the restaurant's constant victories within its category.

The owner also serves the food along with a couple of waiters and cooks. The menu is a one-sided page, not an indecisive textbook with a million kinds of risotto. 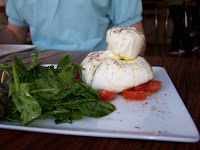 You are given the customary bread slices to dip in balsamic vinaigrette and/or olive oil; the bread is replenished whenever the plate is empty, which is on the house. To start, we ordered the burrata, which is the world's finest fresh mozzarella served with spinach and cherry tomatoes on the side, adorned with fresh ground pepper. I won't bother describing the taste, as it's probably predictable at this point. 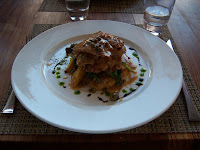 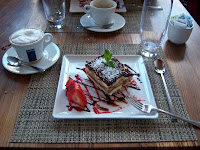 For dessert, there was Tiramisu done right, with a nice cappuccino or double espresso served alongside water, like it should be. The coffee is Lavazza, Italy's most famous coffee, and for good reason. Once you try it, nothing else can ever come close for as long as you breathe.

This incredible dinner at Vicoletto was what all other restaurants are trying to replicate, and was the best way to end the last day in San Francisco. Something tells me that another visit will take priority over the Pelican's lair in the next visit.

I should add that all of the day's tourist activities were completely free due to the internet. A nice touch too...