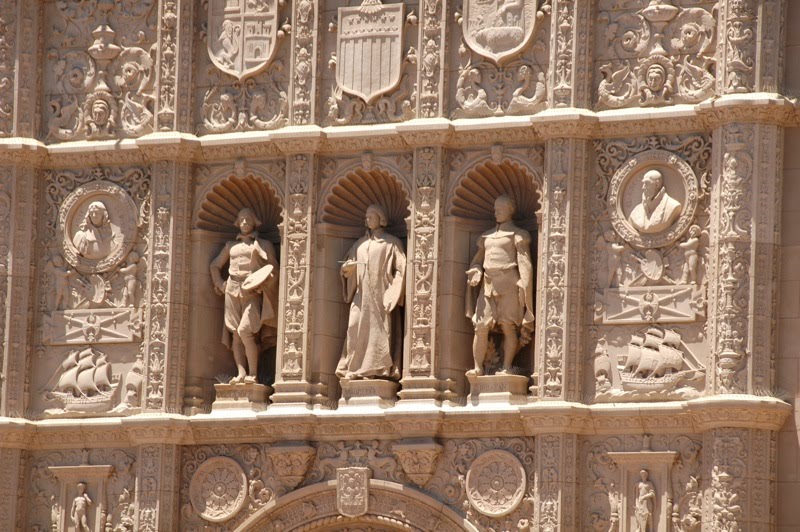 (Historical Balboa Park)
All things must come to an end, and such is the case with our time in San Diego. We took advantage of this last day and took in an older part of the city, after visiting the automotive museum.

The museum is essentially a foyer, where you buy tickets, models, and books, and a big open indoor space featuring all of the cars. Among the exhibits was a "barn find," a car that someone left in a barn or garage for a long time, which has stayed in relatively good condition. It's the dream of any car collector; this one was found after forty years of hiding.

Another exhibited car was a Ford Model T on a plank road: at the turn of the century, there was no road connecting San Diego to Yuma. They were seven miles away, separated by desert; a road made of wooden planks was made simply by laying planks over the sand dunes. This resulted in a very bumpy road, making the rather short seven mile journey quite imposing and seemingly endless.

Sand was often blown over the road, which had to be constantly cleaned off for traction and visibility reasons. When the state figured out that a paved road actually could be made through desert, the plank road was disused. Chunks were taken by people as souvenirs, and others were used to make a fire for warmth by some. Fortunately, a section was saved and remains in its original place today.

One exhibit that was quite different than the others was a car built by a man who spent seven years in his garage. Louie Mattar bought a Cadillac, and then spend $75,000 modifying it so that it can do everything without stopping. There is a chemical toilet (when you gotta go, you gotta go), a phone so you can call people while driving (I don't believe that!), a stove, fridge, hash pipe, exterior shower, and car-sized gas tank trailer.

There is even a system that makes it possible to change a tire while the car is still moving. How much is too much?

There were also cars like this red one. It is a Cadillac with a V16 engine (16 cylinders) which seats two, with an additional two in the jump seat in the back, and it took thirty years to restore. Another fun fact is its size: on pictures, cars like this one seem relatively small. However, only when you see one live do you find out that it's actually the size of today's full-size pickups. It's huge!

Other exhibits included a motorcycle section, mostly featuring BMW, Indian, and some Italian motorcycles; a disproportionate part of the museum featured old Nissans/Datsuns. There was a rare 10th anniversary Z as well as the last Z ever made (1996) before the new one came out several years ago, and its concept car. Besides the 'exhibitional' inequality, most of the cars were parked in such a way that you couldn't get a good look at them.

So the museum was "not bad." But then we exited it and explored the surrounding area, which was very far from "not bad."

I'm talking about San Diego's Balboa Park. It was built in 1835 while California was still Mexican territory, and expanded in 1915 and 1935 for the opening of the Panama Canal and the California Pacific International Expo, respectively. From the beginning, the area was meant to be for recreational purposes, and in 1870, a law was passed that ensured the park's permanency.

On either side of this huge territory are the San Diego Zoo and downtown San Diego.

Balboa Park is like a small city completely built in beautiful Spanish-era architecture, and all of it is beyond description, even with pictures. This is something that just needs to be experienced firsthand.

While looking for a particular spot, a man with a mustache who was showing people around asked if he could help us find something. We told him where we'd like to go and he took us there. On the way, he asked us where we were from; we said SRB. He replied "kako ste?"

It turned out that he traveled up to Dubrovnik from Skopje in the late eighties (before the trouble), and has quite a few Belgrader friends as well. He's a local who works in the area and voluntarily helps people find their way around the park, practicing his languages.

Among the park's landmarks are the botanical garden, open-air organ theater – hosting a free concert every Sunday at two in the afternoon – and the international houses: a mini-village where each house represents a different country. Tomorrow, there will be a yearly event where each of them cooks national dishes for people to sample for free.

Since we were going to miss that, we went down to the Argentinian restaurant to order some empanadas for the road. Before that, we visited Coronado, technically separate from San Diego, but it still forms part of its greater area. Think "Starfish Island" from "Vice City" and you have the right idea.

Sunset marked the closing of the day's photography, but arrival in Los Angeles was afterwards. Rightly so in a way, since the first sight of the city was what seemed the worst part of urban LA. The hotel is in Hollywood though, so it's not all that bad, despite the air of arrogance.

Enjoy the pictures! I'm off to enjoy my empanadas.