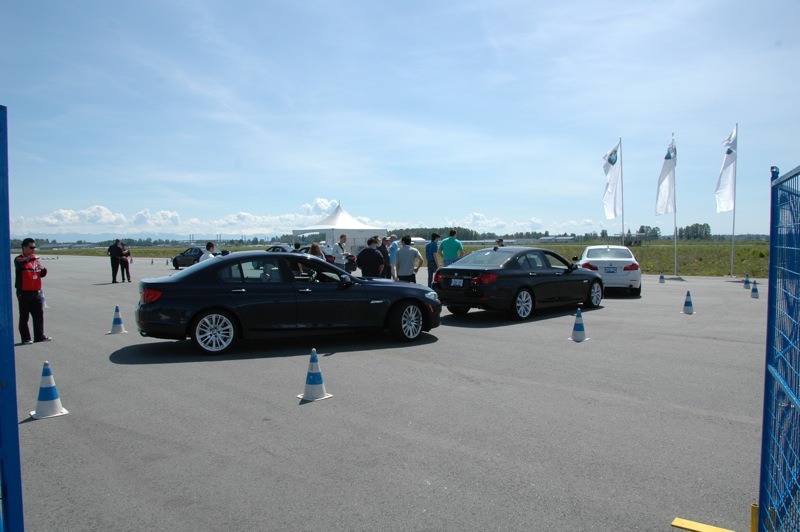 Module two of the BMW “Innovation Drive” was putting the new 2011 5 Series through a twisty track. The six “5-ers” we were given to drive were the only ones in Canada for the time being, as this car isn’t on sale yet. Five of them were 535i models (the six-cylinder ones), and one was the 550i (the ones with the V8) that most of us didn’t get to try out.

Before we began, we were briefed on some specifics about the cars. We learned that the servo isn’t actually on until you turn the wheel, that the car has regenerative brakes even though it’s not a hybrid, and that it’s automatic transmission has eight (!) gears. All in the name of efficient dynamics, you see…not because Mercedes recently came out with a seven-speed 'box.

As one of the instructors in module one quipped after making a parallel with bicycle transmissions, “we’re not planning to make a car with 11 gears, but never say never.”

They also ran through how to work the shifter; this isn’t nearly as patronizing as it sounds, nor is it because of the gear count. You must pull back the oddly shaped thing to engage Drive, after which it self-centers. A button on top of the shifter engages park, and the electronic parking brake is selected via a switch behind the shifter itself.

So then, the course: give it some gas, snake through the first slalom, take two 90-degree corners at speed, go through the second slalom, give it full gas on the straightaway, then brake and swerve around a red cone-shaped obstruction as you take the home stretch. 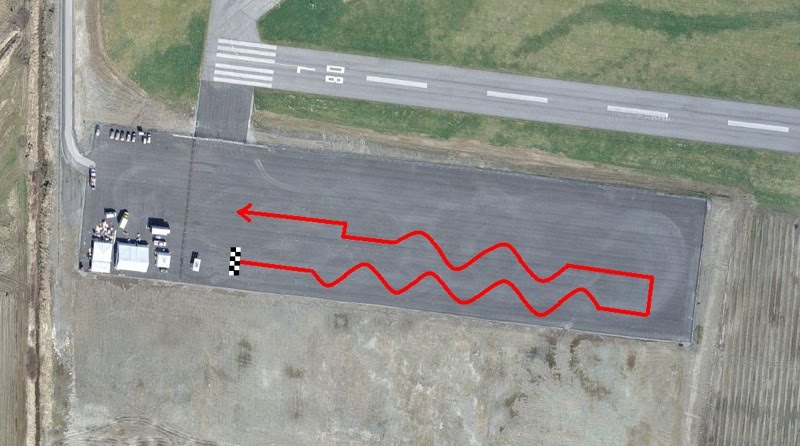 The instructors divided us up and took us for a demo lap of the course, where I got to experience the course from the back seat; the effects of the g-forces are stronger in the back…trust me.

The dimensions seemed plentiful at first, until I realized that the front seat was in fact not all the way back. As the even taller individual sitting up front adjusted his seat, the lack of space became increasingly obvious as the lower half of me was compacted into a cube. The fact that the “five” sports a hard, airline-style vertical shelf instead of the traditional mesh magazine net on the seatback didn’t help matters either.

We eventually reached a compromise, which meant that I was finally allowed to breathe out. I then admired the new-found freedom of my own mobility by looking up at the black headliner, only to find that somebody had left a piece of a current-generation Chevy Tahoe on there.

I poked at it to see if it would come off, but it turned out that this ‘piece’ was actually supposed to be there. What I’m talking about is the massive growth that had sprouted off the inside of the sunroof; in other words, the dome light.

I’ve no idea why it’s so massive – maybe that’s where the black box is – but I do know that it shouldn’t be that voluptuous. It seems that they were so busy with efficient dynamics that they forgot that real people might wish to use the backseat at some point.

As you’d expect, being thrown through a couple of slaloms like a sack of potatoes makes one forget about the tumor on the headliner. Since none of our faces came off after the demo, we each took a car with our co-drivers and lined up for the first run: taking the “five” for one lap in the “Comfort” mode of the Dynamic Drive Control system.

After receiving for the instructor’s go-ahead, it was time to start. The 535i accelerated instantly, simply put. Those concerned by the fact that it doesn't have a V8 need not read on... 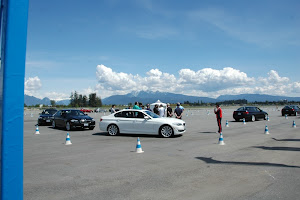 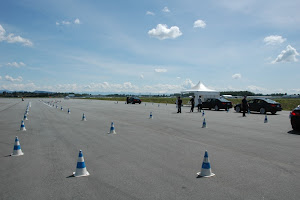 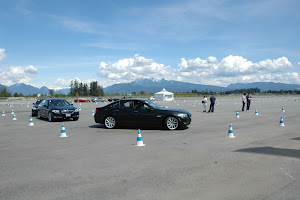 Considering you’re about to pilot a full-size vehicle through some really sharp and twisty bits, the thought that it might not be as nimble as its speed promises crosses your mind.

But no, in Comfort mode the car holds its composure relatively well while you abstain from lifting off and go left-right with the wheel. The Active Steering is quite useful too: at low speeds one doesn’t have to turn the wheel as much to take a given turn, and at high speeds, the opposite is true to increase directional stability. It may seem illogical at first, but when you need to turn at speed – i.e. in the slalom – the benefits become more than obvious.

Right at the end of the first slalom was the first 90-degree turn, and you weren’t told to make a full stop beforehand. During the briefing, we learned that the new “five” has a form of four-wheel steering called Integral Active Steering: at slow speeds, the rear wheels turn three degrees in the opposite direction of the fronts, in order to reduce the turning radius. At higher speeds, they turn the same amount, but in the same direction. This system isn’t anything completely unseen, but it is the first time such a thing has been applied in a BMW.

So, knowing how the system works, I bravely decided to not make a full stop and go for the turn, expecting to end up among the pylons. I turned the wheel just a bit but the car already made the turn, remaining between the cones. For a brief moment, the new 5 Series in a way turned into a Fića: I’m quite sure that even it couldn’t turn tighter than the 5 Series did.

I was more confident with my second 90-degree, which of course the car again took with ease. I drove the second slalom more aggressively than before, now knowing what it would be like (read: it was more fun this time around), but caution showed itself once again at the upcoming brake-and-avoid.

One expects the brakes to be as good as the acceleration, but since I was rapidly approaching unknown territory, I took the cautious approach and braked early…despite knowing that pylons don’t feel pain. My foot squashed the left pedal right when I got to the start-to-brake-now line; there was about half a car length at least to spare before I began to swerve. Good brakes! 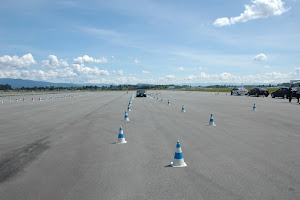 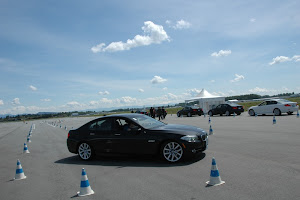 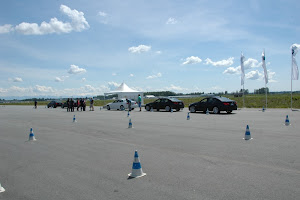 Next up was the same thing, but with the Sport Plus setting engaged. The Dynamic Drive Control has Comfort, Normal, Sport, and Sport Plus modes. “Sport” firms up the suspension, changes the shift pattern, and does a few other technical things to make the family car turn into a sports car. “Sport Plus” does all of that plus shuts off the traction control (DSC – Dynamic Stability Control) so it doesn’t interfere with your hoonage fun.

The idea is that when you randomly come across a nice driving road, you needn’t fear that you’re in the family car; since it’s a 5 Series, you actually haven’t “left the sports car at home.”

I pressed the button to engage the setting, saw the “DSC off” warning light in the instrument cluster along with a message on the computer, and got the go-ahead once again from the instructor.

After the first turn, it was very clear how much more stable the car was (the difference is drastic), thus I didn’t hesitate to tickle the upper limit of the recommended course speed. The car seemed to be fine with it; I didn’t get a yell through the two-way radio either. So I kept at it.

I took the 90-degree faster as well and the car never skipped a beat. Can’t lose when the sport setting works together with the four-wheel steering. This keeps you far away from the tar-and-feather chair too.

Those of you that think a heads-up display is just a gimmick only fit for Star Trek, take a sporty car through a slalom and prepare to be proven wrong. It is so indispensable in such speedy scenarios that I’d sacrifice the adjustable suspension settings in order to keep the HUD on my options list. It may be the most important relevant feature given that watching your speed was necessary, so I’m a bit surprised that they didn’t mention it in the briefing.

In the end, the whole second module itself was somewhat of an unfair comparison. Having seen it done before doesn’t really give you an idea of the car’s capability in your hands.

The only way to know is to give it a shot yourself, so the first run is pretty much that: less trying out the Comfort mode and more trying out the course itself. Had they let us run through the course slowly on our own, more use could have come from the first real lap. 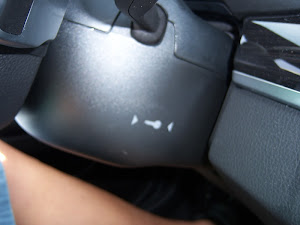 It’s only during the second run (which was in Sport Plus) where the car can truly be given a workout. However, you’re too burdened with getting the most out of your final run to really notice what the car’s actually doing. Nor do you remember to ask about the funny key symbol, present where there is no ignition (the new “five” is completely keyless).

Don’t get me wrong: it was great fun, but it could have been more so had things been organized differently. We had no time for further reflection though, since we were already on our way to module three: flogging the 1 and 3-series.

Moral of the 5 Series story: save your money and buy the six-cylinder. You won’t ever really need the added power that the V8 gives.