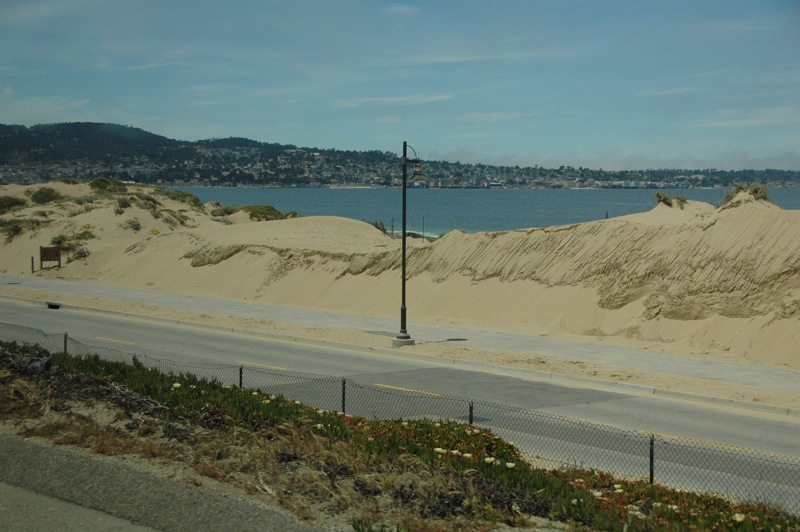 (Sand dunes in Monterey)
A very obscure saying goes something like "all things must come to an end." The faster the end comes, the harder the shock is, and the sadder one becomes.

There are many advantages to taking the car to a destination close to three thousand kilometers away, and among them is the fact that the end does not come nearly as quickly.

Namely, instead of taking a flight and ending it all in a few short hours, you have two whole days to readjust and prepare yourself for the daily grind that will erode you once again.

But you have an ace up your sleeve: two weeks in a much more interesting place not only recharges your batteries, but gives your exterior a olive-tanned re-finish that will take longer to erode...

Also, this is California, and even though you are heading home already, there is still something interesting to look at.

I wasn't kidding when I said that the Pacific Coast Highway is long. In fact, it's so long that there's still a couple hundred more kilometers to explore, and they are the best ones of all.

You know those two-lane winding roads that flow along cliff faces on the coast itself? This is one of them, and being located in the US state that it is, it's probably the same one that you saw in the movies...

Therefore, even the drive home is epic, and this road is almost worth putting up with all of the negative aspects of living in California.

So is the view from said road.

The state is so good at what it does with asphalt that not only is the road in impeccable condition, but they have a completely genius and effective way of traffic control when they are doing renovations: they set up a traffic light.

Instead of the bored traffic worker adorned in a high-visibility vest waving a crooked yellow square at you, there is a temporary traffic light. One side of the street is driven on, while the other is being worked on. Why hasn't anybody else thought of this? (hint, hint)

A mysterious fog covers parts of the road despite the fact that the weather is perfect. Perhaps the body governing the PCH was inspired by Universal Studios and uses fog machines for dramatic effect.

Only four cars with BC plates were spotted in all of southern California, and half of them were noticed because of their questionable maneuvers in traffic. One of these was exiting a PCH pullout backwards as not one, but two motorcyclists were approaching.

I'm still not sure how no accident resulted, though credit is probably due to the motorcyclists.

The PCH ended as the sun set – quite fortunate timing. Since California loves its tolls, one had to be passed so that we could move on to the dark portion of the journey, on the familiar I-5. At one point, the only other vehicle on the road was a car identical to ours. It was like in a racing game when you follow your "ghost car," trying to beat your own time.

Since the PCH is all about the view (at least as far as the internet is concerned), the photos will take it from here.