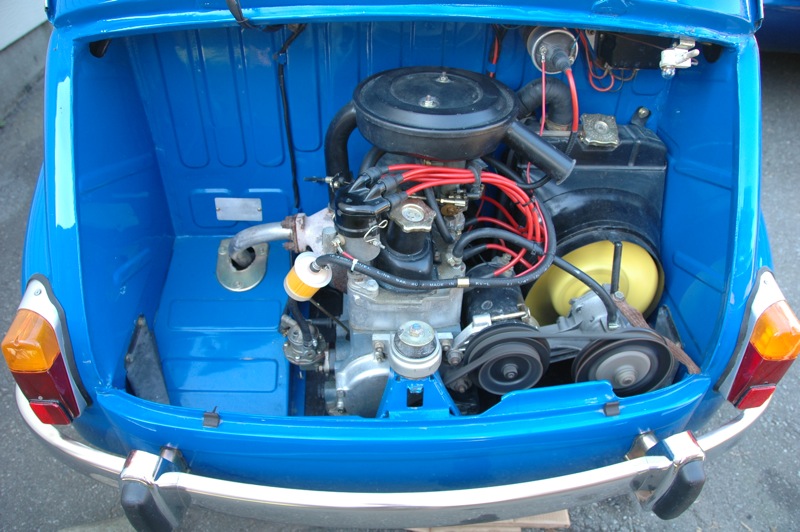 (Spot the difference.)
After the Fića got back from the mechanic, I resumed my usual schedule of running it every couple of days, to keep the battery full. The first time I did that post-repair, the Fića hesitated to start, made popping noises from its exhaust pipe (don't we all), leaked fluid, produced a coarser engine sound, and promptly stalled the instant it was left to idle on its own (sans foot-to-pedal contact).

And yet, this was all supposed to happen.

When diagnosing the fuel gauge, we also took out the fuel sending unit, to make sure it was working properly. I inadvertedly found out that the fuel tank wasn't already cleaned out, leaving all the nasty sediment and residue to remain collected at the bottom of the tank.

So when we took out the fuel sending unit - essentially a big lever inside the tank itself that floats at the surface of the fuel inside - the sediment at the bottom of the tank was agitated/disturbed and thus thrown into the rest of the fuel. After about an hour's worth of engine activity (i.e. running), it gradually made its way through the fuel lines and into the carburetor, effectively choking it in the process.

This choking was what caused all of the engine troubles I described earlier. The solution: unscrew the idle jet, clean it out with compressed air, and put it all back together.

But that only fixes the problem until more of the sediment makes its way through the fuel line again. Even cleaning the tank won't keep new sediment from eventually forming and coming back to where it is not welcome.

There is only one way to prevent it from happening again: installing a fuel filter. So I visited an auto parts store, bought one, and put it to work.

Installing it took a grand total of five minutes.

Having done all that, I anxiously started the Fića up...and it started immediately, but was still rough. Applying numerous jabs to the throttle for several minutes burned up all of the tainted fuel and allowed new fuel to get filtered and make its way through to the carburetor. Once it did, the Fića was back to its old, nicely-running self: no dying, no popping noises, no rough sounds, and more than happy to idle on its own.

I should mention that no Fićas originally came with a fuel filter from the factory. This was/is a common upgrade, though.

Also, I can immediately see if there is any uninvited contaminant trying to sneak its way through with the fuel and into the engine, since the filter I put in is completely transparent. Below is a video, so you can see it... The brake lights and handbrake can be seen doing what they ought to, as well.

Such is life with a classic car.