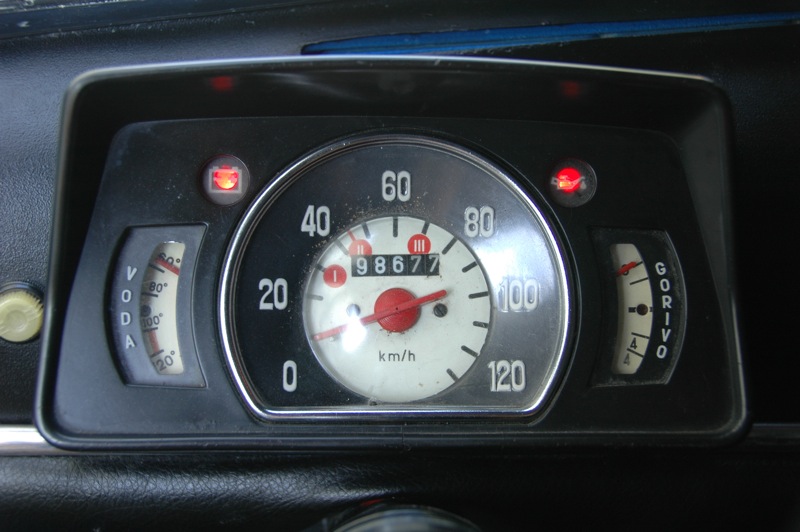 I fixed the temperature gauge!

I consulted the knowledgeable about the gauge not working. Not only did I find out how to fix it, but I also found out some facts about my Fića that shed more light onto why it wasn't working.

The first thing is that my Fića did not come from the factory with a temperature gauge. As a matter of fact, none of them did until 1978, which was when Zastava first started to equip Fićas with them.

The warning light goes on at about 112 to 118°C. However, the Fića's optimal work temperature (i.e. when the needle hits the middle of the dial, just like in every other car you've seen) is between 80 and 100°C. In other words, 12 to 18°C is a very big difference, and by the time the warning light goes on, it's most likely already too late to save the engine.

Therefore, it's hopeless to drive around thinking the light will save you in case the engine overheats, even though it's supposed to.

Fortunately, this is a simple car, and there is a simple solution to this problem – simpler yet if a previous owner has upgraded your Fića with a temperature gauge: unplug the contact that goes from the radiator to the warning lamp in the dash, and plug it into the gauge instead.

I'm not kidding – since my Fića came before temperature gauges, it doesn't have the neccesary hardware (a thermostat) to run both a gauge and a light. The existing hardware, though, still transmits the temperature through the wire.

As a result, the light turns on when there's a strong enough current – correlating to at least 112°C – but stays off if the current is weaker than that. When connected to the gauge, however, it reads/displays everything that comes through the wire. Therefore, you can see exactly what the coolant temperature is.

So, I took off the instrument panel, unplugged the warning light, and plugged that wire into the gauge instead. I turned the key to give it contact, and the gauge moved a little – visible in the title picture.

I then started the engine, and as the engine ran, the needle began to gradually advance - all the way to 95°C (it was 30°C outside, thus the higher operating temperature).

I ran it for twenty minutes more, and the needle stayed at 95°C. Success!