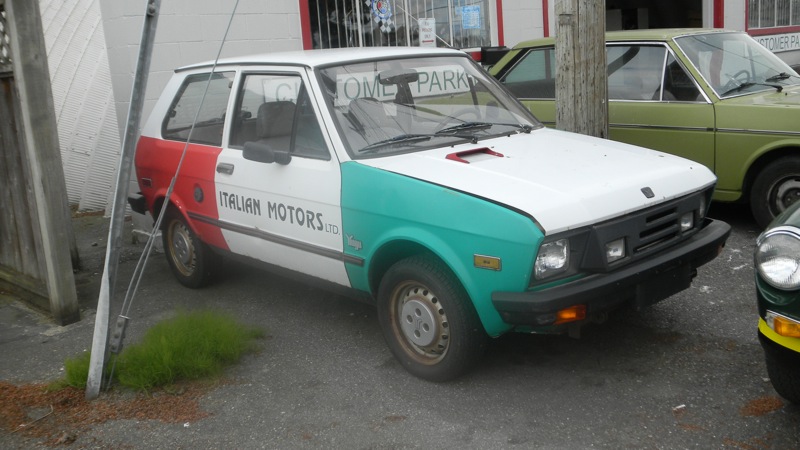 (Which one does not belong?)
Sunrise. All is calm in a particular town in BC. The more-than-fashonably late summer season has stuck around for a few days already. Somewhere, in a semi-industrial sector lies a shop, one that specializes in Italian cars. The shop's been there for quite some time, yet there's something there that doesn't fit – something that shouldn't belong, but does anyway.

The Yugo stationed in front of the shop isn't alien to the area – it's an American-market model that has belonged to the owner of the shop since early in its life. This Yugo, though, is what familiarizes the unfamiliar.

The rara avis in question is inside the shop: it came off the very same assembly line as this Yugo did, but about a decade and a half earlier, and swanks a distinctive blue-and-white coat...

Some hours after sunrise, the time finally came to free this bird of its gremlins once and for all. 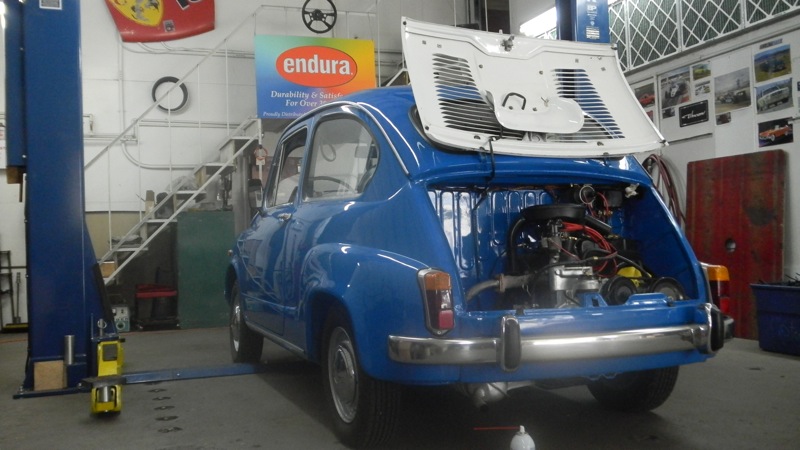 With the expertise of Bernie Hamm, we did just that:

1. Starter contact replacement
As I wrote earlier, the restorer forced on a contact that was from a different car. The Fića now wears the proper contact it should have had in the first place.

2. Fuel line replacement
Turns out that the fuel line that was on the car is a bit too short for comfort. We replaced it with a new, longer, and more flexible one: always good in bitterly cold weather.

3. Fix the brake lights
When you press the brake, the brake lights didn't go on. The contacts in the bulb housings are old, and therefore their 'springiness' is getting worn out. During the restoration, nobody took the time to make sure they'll stay up and do what they are supposed to in the future.

We placed small rubber hoses under each contact which act as a spring, therefore keeping the contacts up and always touching the light-bulbs – which in turn are kept in their sockets. The brake lights now work just as they did when the Fića left the factory!

We performed the same fix to the rear turn signals as well, as preventative maintenance.

4. Fix the engine bay & license plate lamps
The light that illuminates the engine bay would work whenever it wanted to, not whenever you needed it to. We took the entire housing apart, cleaned it completely, and tested the circuit – it worked!

The problem was that the restorers didn't bother to clean it up, so the contacts were left dirty and oxidized. No longer the case.

The license plate lamp was next, and we took it apart as well...it was relatively clean. We quickly discovered that the problem it had was of a different nature: there was no ground wired for it at all!

Since the restorer never bothered to wire a ground for this light when he was supposed to, we did it for him... The light now works as Zastava intended.

5. Make the handbrake work
Pulling up on the lever yielded absolutely nothing – we got the Fića up on the lift, tightened both ends of the handbrake cable, adjusted the rear brake drums, and tested the handbrake. Of course, it now holds the Fića like Atlas does the planet. Albeit less reluctantly.

6. Front hood release mechanism adjustment
When opening the front hood, I had to pull the lever with one hand and simultaneously lift the hood itself up with the other hand. The mechanism for this, too, just needed adjustment. Now, the hood pops up like every other car you've seen, like it should have after the restoration.

7. The fuel gauge doesn't work
This one was a bit more involving. We first made sure the gauge was getting power – it was. We checked the rest of the wiring as well, and the problem didn't lie there, either.

We then took out the fuel sending unit (the physical 'sensor' in the tank that measures the fuel level) to see (a) if it works, and (b) if the gauge registers what the sender tells it to. Inadvertently, we found out that (c) the sending unit was mounted sideways, such that it couldn't physically move up with a higher level of fuel. In other words, the position it was in physically prevented it from being able to read anything more than an empty tank!

I let out a sigh of relief, but it was short-lived. The low fuel warning light did exactly what its supposed to, but the gauge was still limp.

We took apart the gauge, and saw that one of its microscopic wires had lost contact. My mechanic soldered the wire to the metal piece it was supposed to touch, and we tested the gauge again. It showed signs of life!

Sort of. It displayed half a tank as a quarter of one.

A new fuel gauge is on its way.

8. The temperature gauge
The most involving fix ended up being the last one. Rightly so, since it is the head-scratcher of the bunch. The reason that the temperature gauge doesn't work is since it's not wired in at all! The restorer never bothered neither to connect the gauge to anything nor to run the wires for it.

This fix is pending, since the circuit diagram I have (and the one my mechanic has) is for the Fićas that didn't have a temperature gauge – only the warning lamp, which on my Fića, works. When I can figure out how exactly the gauge is supposed to be wired, it will work as well.