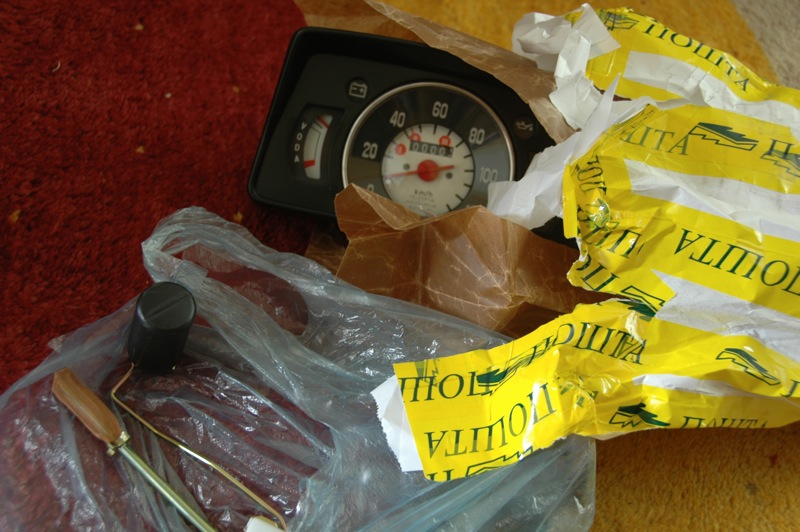 I woke up early this morning to the sound of my own doorbell. In my neighborhood, that combination of events can only mean one thing: a package has arrived. And, unless I have a secret admirer, there could only be one thing in that package: a reason to put pants on and run down the stairs before the uniformed man leaves a paper tag on my front door.

Fortunately, this mailman has made deliveries to my house before, so he knows to wait a couple extra minutes whilst I try and remember my own name before I open the door.

A signature and greeting later, I tear open the yellow-and-blue wrapped box like a new Lego set – though that's not really far from the truth – and pause to gawk at the contents, purely out of surprise.

If there was any doubt to this point whether or not I have the best grandmother one could have, there is no doubt anymore.

After a necessary phone call, I stored the fuel sending unit (pictured at right) with the rest of the spare parts, and took the fuel gauge out of the new cluster. I then went over to the Fića, took out its old one, and replaced it with the new one.

As you'd expect the case to be with something out of a brand-new instrument cluster, the gauge works exactly as it should, accurately communicating what the fuel level really is.

Remember how I mentioned that the temperature warning light was too little, too late? I have proof of this now. This new instrument cluster was made for Fićas from 1980 onwards; the only difference between the 1973 version on mine and this one is the temperature gauge.

All Fića instrument clusters, from the very beginning, are modular. The entire thing is composed of the following:


My cluster's temperature unit originally came with only the warning lamp, and a blank plate where the gauge is now (type 1).

Sometime during the late seventies, one of my Fića's previous owners decided to install all of the upgrades that then-new Fićas had, so that it would look newer...

He changed the front fenders to the new versions without the side turn signals, he swapped the steering wheel for the newer model (the original was very difficult to 're-find'), he switched the front "mask" for a new one (thus discarding the front emblem that's now on the Fića again, which was even more difficult to find), and added that era's temperature unit.

As a result, my Fića came to me with both a temperature light and a numbered temperature gauge (type 2).

Fićas built from 1980 onwards had a different type of temp unit, with a numberless gauge and a blank plate instead of a light (type 3, pictured) – the very same setup in the new cluster I just got.

I'm going to keep my type 2, given that it has actual numbers representing the temperature, and not just a gauge graphic.

The pitfall, though, is that one of my gauges is whiter than the other... I'll see if I can brighten up the ol' temp gauge.

So now, all of the gauges work – but I'm not done yet.