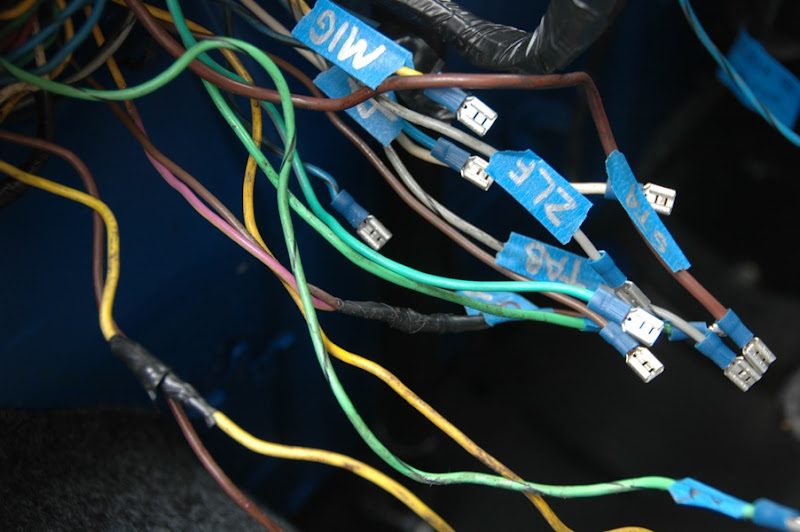 (Making sense of the mess.)
Let's see if I can't fix the Fića's wiring myself...

I had a theory that the car was wired for an eight-fuse-box, but that said wires were forced into a six-fuse-box.

The time came to put this theory to the test.

Unplugging all the wires from the "six" immediately showed that there were more of them than there should be for a "six".

Certain wires had been joined (effectively turned into a single wire, as far as the fusebox is concerned). Liberating these of their imposed Siamese twins yielded an interesting wire count: fourteen.

Exactly the number when a Fića is wired for an "eight".

So, the next step was clear: find out which wire goes where, and connect it to the "eight" I already have.

My Fića will never use a "six" again.

I swapped the old wire contact points for the new ones that the "eight" uses. Afterwards, my multimeter got to work figuring out what wire goes where.

That entailed taking each electric feature (like the lights) apart until getting to its own wire contact – then connecting it via the multimeter cables to a fusebox wire, and then seeing if there was a reading.

If affirmative, the at-the-fusebox wire is connected to that particular feature. If not, one must try another wire...

The results were not surprising.

I identified about half of the wires. Identifying the rest would be impossible: some features that, according to the wiring diagram, should be directly connected to the fusebox, aren't.

A wire for a particular dashboard indicator lamp, for instance, that should immediately go to the fusebox, instead goes somewhere towards the fuel tank. It might as well be connected to Jupiter.

This can mean only one thing: it needs to be re-wired by a professional.