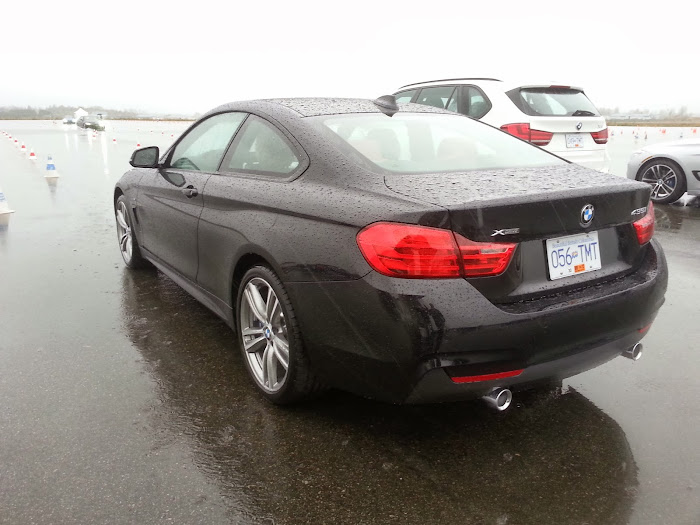 Having done a couple laps with the 428i and (regular) 435i, you prepare to take the next car 'round the second track for all it's worth: the 435i M Sport, the one with the magic suspension...

Hammer down through the slalom, taking each turn faster as you go. By about turn three or four, the back end of the car already starts to lead the direction of travel – despite the all-wheel drive – squishing a cone or four in the process. Not to worry though: to keep the correct side facing forward, all you have to do is lift off and the car finds traction.

Just as you're about to enter the brief straight you notice that, because of a giant puddle and an errant cone from somebody's previous run, you're not sure if its entrance lies through the giant puddle or right next to it...

You flip a mental coin and end up in the right place.

So down the straight you go, into a 90-degree turn and...BOOM! You're blind!

You've just blasted through a small lake that relocated itself all over your windshield. The goggles wipers do nothing since there's just too much water – you lift off until you can see again.

That moment happens to be in the middle of the next corner, which ends up being so tight you have to look out of the driver's side window anyway...

Floor the skinny pedal once you get through – the automatic hesitates a second as it drops two of its eight gears to comply (as automatics do). The idea at this point is to get the most out of the impending emergency stop box, by finding as much speed as possible in the brief straight.

Slam on the brakes all the way and you'll stop soon – but due to all the water, not soon enough. Foot still firmly on the brake, you steer the car. It turns. Ah, the magic of ABS.

What's a 4-series, you ask? It's what used to be called the 3-series coupe – marketing men have decided that all new BMW coupes should have even numbers, hence '4' instead of '3'.

New moniker or not, this car's performance is not unlike its sedan counterpart, where the M Sport suspension does wonders and is hard to resist. The six-cylinder is also noticeably faster than the four-cylinder (428i), yet that 'four' will still never leave you wanting for power.

So which one to get? As with the X5, try both and decide – it's really a thing of subjective preference. 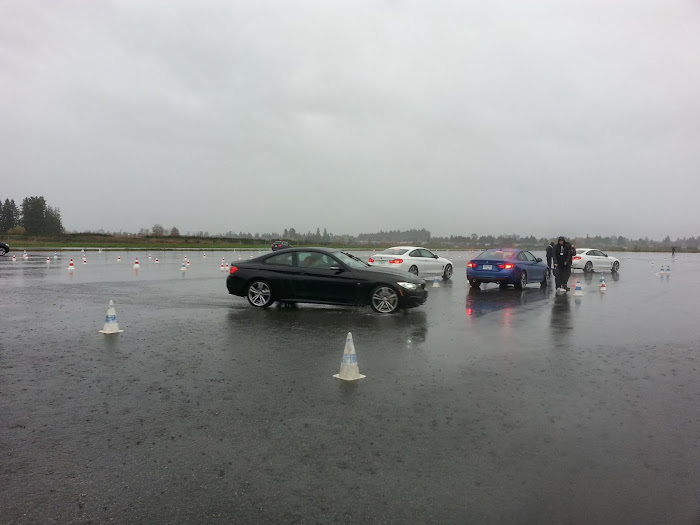 It's spacious enough inside, even for those who cast a shadow of six feet or more...still, headspace is snug with a sunroof, so the taller amongst us will consider special-ordering one with no hole up top.

The seats won't make anyone think twice though, as they hold the driver brilliantly!

Back seat room, however, is another story... Legroom is far above average and room at your sides is abundant as well – but there's no room left for your head! Sitting in the back and making mine fit involved twisting my neck so much that I couldn't see properly!

Getting back there is also needlessly complicated. 'Lesser' automobiles have you pull a lever to get the front seat out of the way. In the '4', though, it's power-operated: pull a release and then press a button. For ages. In the rain. Before anyone can even put the front seat back again, the 'lesser' car is miles down the road...

Still, ignore the misleading hind quarters and you're looking at a satisfying and impressive car, despite some reviews claiming that it's 'gone soft.' 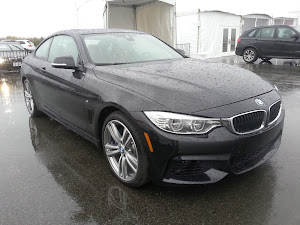