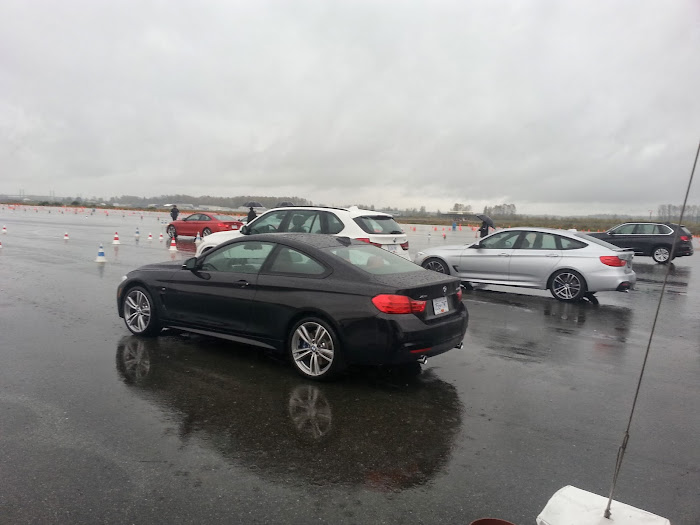 To what extent does technology help drivers get out of trouble? In short, it helps a lot.

All-wheel drive and various control systems made us forget, for instance, that the X5 was an SUV while we threw it around corners. Better yet, they made us forget we were driving in horrible weather in the first place!

Just think about that for a second. That's like saying you can skydive without a parachute and not die on landing.

But that's only true to a certain degree...

Being too greedy with the systems is what got the X5 to understeer and leave the track. And a little more greed would have turned the 4-series the wrong way round in the slalom.

So what did we learn? We still need to be 'switched on' while the systems are.

That's huge value from an hour or so of driving time. If the organizers intended it this way, I take my hat off to them.

The result? The improvements I suggested last year were implemented this year!

I'd be lying if I said I didn't want to note the highlights...


Suggestion: More time to prepare
Last year, we barely had time to breathe between laps. This year, they let us take our time setting up: "Adjust the seat & wheel, get comfortable, then approach the starting line when you're ready."

The added time also helped us mentally relax between laps.


Suggestion: More time to learn the track
Doing only a couple laps per track is unfulfilling and leaves unanswered questions. This year, each person (and not each pair) got about five to six laps of each track!

We could afford ourselves some slow laps since we still had more of them left. Go slow, prepare, and get to know all the difficult parts, then do some fast runs and savor the challenge. How it should be – and how it was.

Plus, we got to make sure a car's good performance wasn't just a fluke...


Suggestion: Drive every car
When showing several sub-models with unique characteristics, not letting everybody try each one implies that the differences don't matter.

This year, each person (and again not just each pair) got to try every engine and suspension variant at hand. All got the chance to see if the M sport suspension or bigger engine is worth the extra money. The event yielded a solid comparison.


Suggestion: Connect sales pitch with event
Last year, the briefing at the beginning just sold us on the features but had nothing to do with what we were actually there to do. This year, there was much more time dedicated to explaining the systems to be tested.

While that is a significant plus, there was still a void to be filled...

I went to a similar VW driving event recently. They, of course, also had a sales pitch before the drive portion, but all points made were illustrated with a practical demonstration, using either a model display or the real car itself!

The option to poke through the cars we tried would complete the BMW event. After the features are brought to our attention at the briefing and we test the cars dynamically, the logical next step is to examine the cars ourselves at our own leisure (without a salesman lurking!).

Why only at the end? We'll know what to look for!


* * * * * * * * *
This year's event was a much more focused yet relaxed one, with enough track and buffer time to do what we came there to do and feel comfortable doing it.

The only thing missing was a 'practical de-brief' with the cars themselves. After all, some things are only noticed while a vehicle is stationary...