BMW vs. Audi A4 quattro Premium Plus 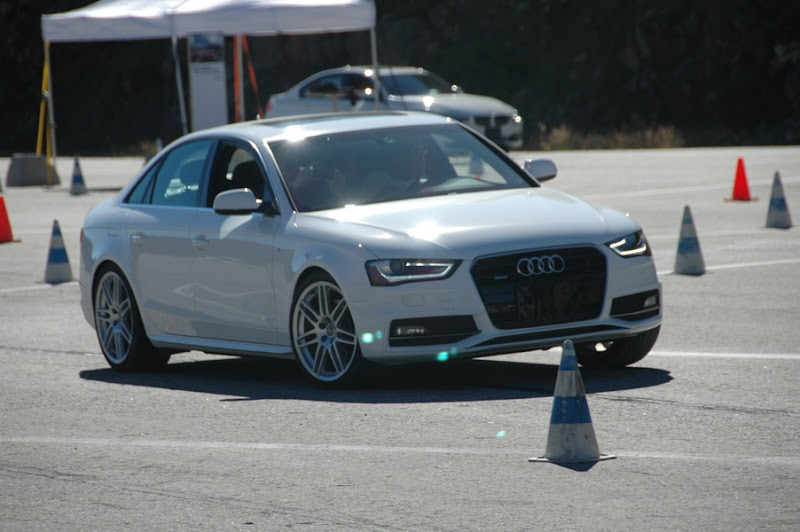 Despite Audi's unbearably irritating salesman, I should technically be biased towards this car. I myself rely on a quick Volkswagen for regular transport, and find it to be the best choice out there. I also adore the B7 Audi RS4. By all logic, this should be my favorite.

This one in particular has the S-line package as well, bringing good sport seats, 19" wheels, sport suspension, and some trim details to the boxing match.

The 2013 has also been face-lifted on the outside, and has a new 'mouse-pad' on the inside, which you can use to actually write letters out instead of typing them on a touch-screen keyboard. 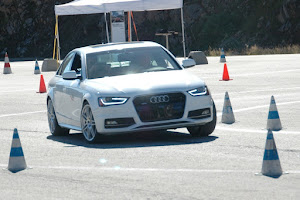 So, like Mercedes is known for solidity, longevity, and luxury, Audi has a reputation for engineering prowess. This gives us the wonderful interior; this gives the 211hp, 2.0TFSI engine its legs in this car, despite all numerical logic.

In show-business terms, Audi got its 'break' right at the start of the eighties with rally races. Until then, all rally cars were two-wheel drive; Audi developed a revolutionary all-wheel drive system and put it in their new rally car, named after that very system: the Quattro.

The legend was born.

Further proving the system's capabilities five years later, they drove an Audi 100 (the A6's predecessor) up a ski jump. 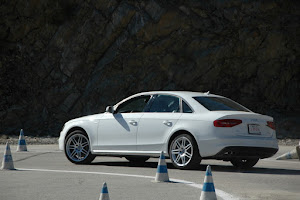 Audi's break shows how cold, purpose-built engineers prevail. Ski jumps are also usually cold...but climbing one is no less amazing than it sounds.

Things should now make more sense: BMW vs. Audi is synonymous to Engineering vs. Joy. On paper, Audi should have this. They've done all their homework.

So did all the studying beat the BMW on the first track?

My kitchen faucet is engineered so you don't need to pull a lever to turn the water on; you just touch the spout with the back of your dirty hand and wash the residue away. No awkward arm angles to minimize dirt contact, no thoughts of future cleaning torture – no future cleaning at all! There won't even be water to wipe away, because it shuts off in the same manner.

It's wonderful. The only thing more convenient is telepathy.

The Audi is the same way. There is no pre-curve strategizing, no in-action correcting. You just point the wheel, look where you want to go, and it dances to the rhythm of your revolver.

The A4 held the roundabout well – so did the sport seats my frame – but the BMW was more planted. Through the slalom, the A4 was willing: step on the gas, and away it goes. Saw at the wheel without lifting off much, and it doesn't get out of line. It's right where you want it to be. 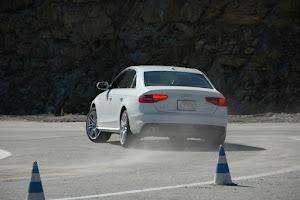 But it's just like my faucet: it does exactly what you want (and isn't just an appliance), but it's not memorable. It's the pure fruit of an engineer with high standards.

The power steering assist varies with speed, and while well-calibrated at speed, is over-boosted while parking. A single pinky finger can turn it lock-to-lock. It feels broken, like the steering column snapped and is no longer connected to the wheels.

Like the Mercedes, the Audi was also subjected to the sand trap. It was better than the Merc, but still slid more than either 328i I tried on the same track. 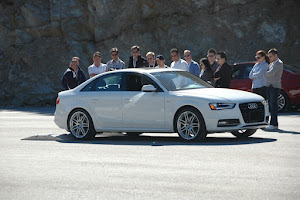 Then there's the roller demonstration.

The Audi got its axles off the rollers both times with its own power. However, the race car driver had to floor it in order to free the rear axle!

(notice how the rear has squatted down, like the Mercedes)

"So what's the problem? It freed itself!"

xDrive didn't need full throttle to free itself, because xDrive can send 100% of power to either axle; quattro can only send 70% to the front and 85% to the rear!

Thus, the problem is that BMW beat Audi at the game they themselves invented! Where is that quattro prowess that twice climbed a ski jump?

Based on this comparison drive, the BMW wins. But I can't say with complete certainty that this is the last word.