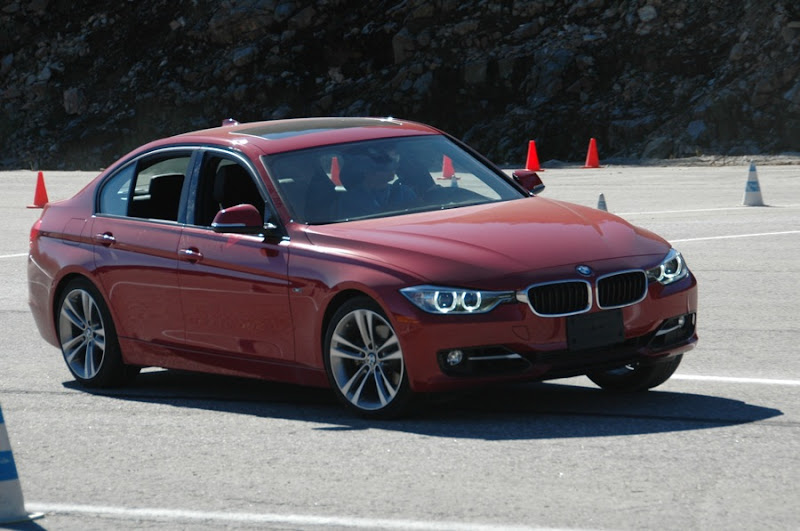 High expectations abound for someone who hosts an event. People expect that the TV show is worth watching, the party worth going to, or the food worth eating. The host takes this burden of expectation on their shoulders so that their guests leave satisfied – ideally not because they are leaving.

It gets even worse when someone is hosting a competition in which they themselves are participating. Not only is one expected to put on a good show, they are also expected to win.

So what happens when they don't?

Let's pause for a moment: nobody would make a competition geared against them, made not for them to break a sweat participating, but made to noticeably reduce the chance of their own victory.

On the other hand, it's stupid to err the odds in your favor: that violates the spirit of the competition, turning it into a conceited display of an inability to win without cheating. It's ultimately self-defeating for the host, as all credibility they may have once had is lost. 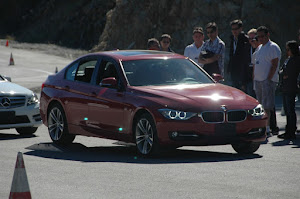 Fortunately, this wasn't case with the comparison drive. The events in the course seemed to make a level playing field, such that I can evaluate the cars on merit alone.

Let's begin with the rollers: they effectively put one axle on a zero-traction surface where no snow tire on the planet would help, to isolate what each car's all-wheel drive system can do.

I expected quattro to prevail, but xDrive took the win. The 328i got its traction-less wheels off the rollers fastest and with the least amount of throttle applied.

How is this possible? xDrive can transfer 100% of the power to either axle. The others can't. 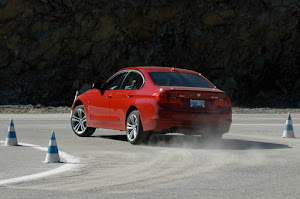 Then there was the sand trap: floor it around the roundabout and do not lift off when traction is reduced. All the cars slid: the Mercedes the most, the Audi much less, but the BMW slid the least, noticeably so.

Throwing the 3 through the slalom revealed that it has a much higher limit than the other two: you can take sharp, sudden, and frequent turns at a higher speed while maintaining the car's composure.

It felt the most planted through the twisty bits, given that it exhibited the least amount of body roll (leaning over towards the outside of the turn) and never lost grip.

Acceleration was, in a word, interesting. If you focus yourself on the numbers alone, you wouldn't be ridiculed for expecting the 328i to blow the A4 and C300 away: the Audi is the thick end of a second slower than the BMW, and the Merc is just as much slower than the Audi. However, the Audi has the least horsepower per ton (the 3 has the most).

The numbers turned out rather useless once all three were put to their paces on the first track... 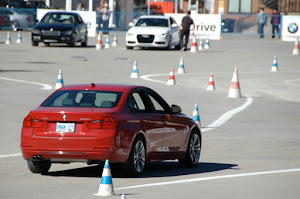 The 3, as numerically predicted, was the quickest of the three: it gets up to speed just as fast as your right foot wants, and it pulls itself out of a turn sooner than the others.

The Audi was surprisingly not very far behind at all, even though it's heavier and has less power. It silenced the numbers. But the Merc...in a word, lagged.

Now that I think about it, given the Audi's spec-beating performance, I'm very curious to see how the Volkswagen GTI would fare here...


* * * * * * * * *
Before its 2012 re-design, the BMW 3-Series was the last respectable compact car that was actually compact. Now, all of the players in this segment are officially the size of a bus. Among eachother on a closed course, you'll never notice the extra dimensions; the 3 in particular doesn't even feel like a wide car from the inside. 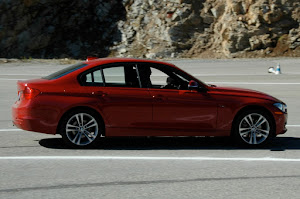 In town, though, they all look huge. Probably because they are. This one in particular is the size of the E28 5-Series!

This does have its benefits: those extra ten centimeters of length bear so much rear-seat legroom that the case for buying the current 5-Series instead is put into question. Adding to this is more headroom all around, much more trunk space, and a bit more weight savings. And cupholders.

The re-design isn't all smiles und sunshine, however. The new 3 feels a bit less tossable than the previous one did; it also loses the struts for the trunk and the LED turn signals, in favor of the cheaper goose-neck hinges and incandescent bulbs, respectively. It does have extra brake lights for emergency deceleration moments, however...but so did the old one.

Now that I think about it, given how the previous 3 drives, I'm very curious to see how it would fare against this new one. Here's hoping the next one does something like the new Golf VII does: bringing all the benefits of the previous generation into a smaller overall package.

Another new, post-re-design addition is the automatic start-stop system: the engine shuts off on its own when you come to a complete stop, and starts back up when you take your foot off the brake.

This is just as intrusive as it sounds. Functionally, it's exactly as if you were to manually shut it off at every traffic light. The novelty of hearing the engine quickly crank as you are about to touch the gas pedal wears off...well, just as quickly. 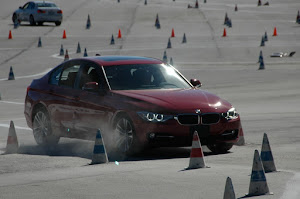 I wonder how it'll start itself up automatically in a few years when the battery is in need of replacement – which will happen sooner, as cranking the engine is the single most taxing activity that a battery experiences.

It's best to press the "off" button (which thankfully exists) and be done with it. Not running the engine at lights doesn't make a tangible difference anyway.

The biggest news for 2012 are the new design variants: you can have your new 3 in any way, as long as it's black one of three "Lines", Modern, Luxury, or Sport.

One of the race car drivers used a customized Ferrari 599 GTO seen in town to illustrate the point of the three lines – specifically, how they exist so that you can customize your 3 just how you like it. Trouble is, they don't quite offer the same level of distinction as a Ferrari with a gawdy carbon-fiber vinyl appliqué. Choosing from three pre-determined trim packages doesn't make your car "yours" any more than your neighbor who chose the same "Line" for his! 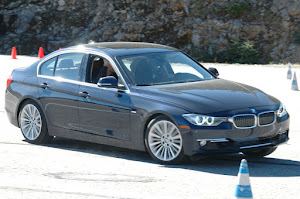 If true customization is the real objective, buyers should have a fourth option: to pick and choose elements (or groups of them, if it must be so) themselves.

For instance, I'd have a Sport Line 3 with the Luxury Line's wheels, interior, and keyfob, along with the Modern Line's brushed aluminum details replacing all the remaining chrome.

Happily, BMW does offer a fourth option, but instead of 'pick your own', it's called 'none of the above'. If you are looking at a 328i xDrive (but not the RWD, mind you), you can opt for the no-trim "Classic Line": there are no interesting wheels, no extra brightwork on the bumpers, high-gloss shadow line, special interior color schemes, keyfobs, nor trim. If you can live without all this, you save $6,200.

If you can't, the Luxury and Modern 328i xDrive both start at $46,200, with the Sport Line commanding another $1,500 on top of that (mostly because of standard sport seats). None of the lines – not even the Sport – offer functional improvements of any sort.

Besides the 328i, there is also a base 320i (which has the same engine but de-tuned, being "Classic Line" only and offering no AWD) and the powerhouse 335i, the topic of the next and final text in this series.

So how did the 328i xDrive stack up against the A4 and C300? Nicely. Ironically, it beat the Audi by being less German: unlike the A4, the 3 was not only very capable, but fun to drive as well. It felt like an excellent and fun car, not just an excellent tool. The 3 (and A4) beat the Mercedes given that the latter is much more comfortable with luxury than sport.