BMW vs. The Final Thoughts 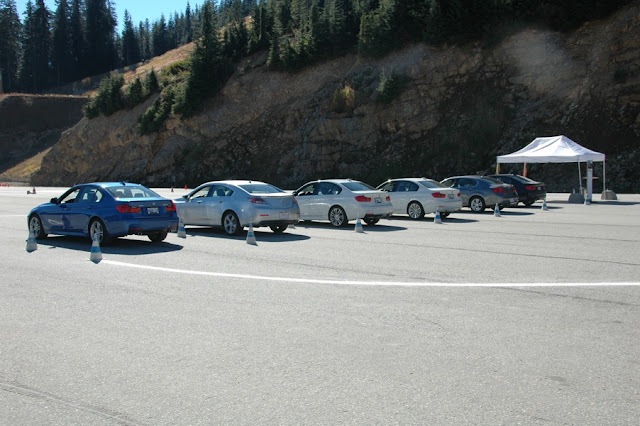 Once we finished our laps, the race car drivers had a go...with us in the car. I'll tell you this: the grab handles on the doors are very sturdy.

Also, the way the race car drivers explained what we were about to do on both tracks was perfect: one talked to the group of us as another was in a car demonstrating.

Nevertheless, the same criticisms I had last time still stand: too little track time and misguided emphasis on non-driving details.

For example, parking the cars at the end of each lap was the perfect opportunity to use Surround View – BMW's camera system that gives you a live top-down view of the car on the iDrive screen. Make us park the car only using Surround View...I can't believe that I was the first to think of this!

Likewise, there was no mention of any of the other cars there, including the all-new 6-series Gran Coupe in the survey tent. Did you notice it in my second post? Neither did anybody at the event...

A practical and relevant feature demonstration can easily replace part of if not the entire sales presentation. Let us see what's so special about BMW's, even while parked! 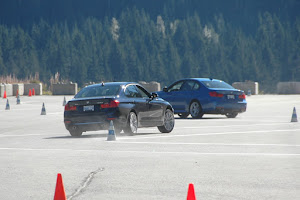 In order to get a sound opinion regarding which car is truly best, some things should not get in the way – this includes being rushed from car to car, driving each car only once, and taking to the track before being given a trial run.

These last two in particular have common reasoning: for most people attending, it is their first time both behind the wheel of these particular cars and on those particular tracks.

The first run any of us have can basically be discarded: drivers use it to get a feel for the activities at hand, to adjust to the track and track driving. As such, they can't use it to see what the car can do in their hands – which is the entire point of this whole comparison!

An intro lap – perhaps in a 320i – would drastically enhance the value each participant (ones who actually care, at least) takes away from this event. A longer straightaway wouldn't hurt, either, nor would the chance to drive the cars more than once.

Mind you, none of these things are necessary to maintain event demand – let's face it, who's gonna say no to a chance to flog a bunch of new luxury cars around a track for free? But is this an event for people to mess around or to actually learn something about the cars?
Posted by Uroš M. on 10/31/2012 11:51:00 PM