BMW vs. The Event 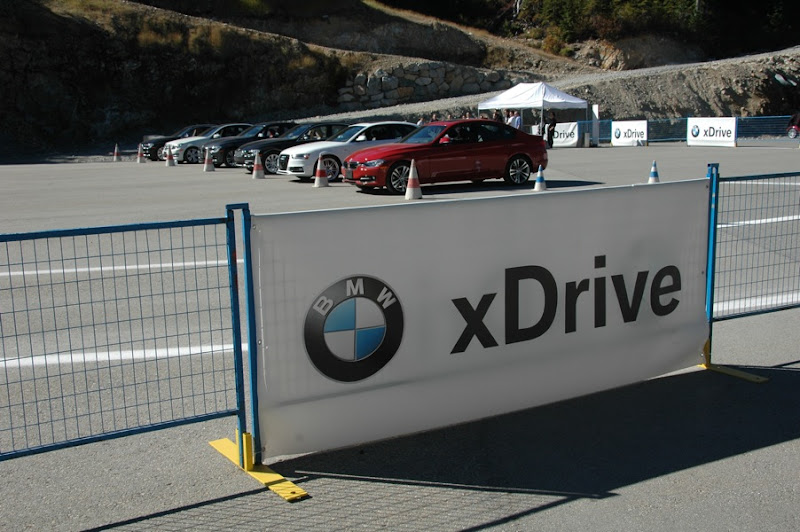 The idea behind this event was to spend the morning testing out all the players in the sport compact segment for yourself – it just so happened that the event was organized by BMW...

Indeed, laid-back and seemingly-independent race car drivers were our hosts. One did the compulsory (sales) presentation at the beginning, and the rest took us out to the tracks, demonstrated the courses, and oversaw our shenanigans.

The procedure was understandably familiar: check-in at the front desk (inside the chalet – indoors beats tents, hands down, every time), have some snacks beforehand (a must, as the event won't make you less hungry), and wait to be called in. 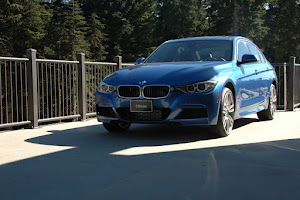 The presentation briefs you on stuff you'll find in the brochures: the parking sensors, the electronic automatic transmission shifter, power and economy specs, automatic engine start-stop, AWD characteristics, and so forth.

We were told all this data in a much more casual, comfortable, and elegant setting – i.e. a food-allowed lounge-type area with no cars in sight and lots of TV screens – and the race car driver used interesting, real-life examples to illustrate his points.

This eliminated the feeling of being ridden by an irritating Audi salesman with no automatic start-stop for his mouth.

Fortunately, it's also what we got, though our track had the added twist of a cliff edge waiting on the wrong side of the painted line. 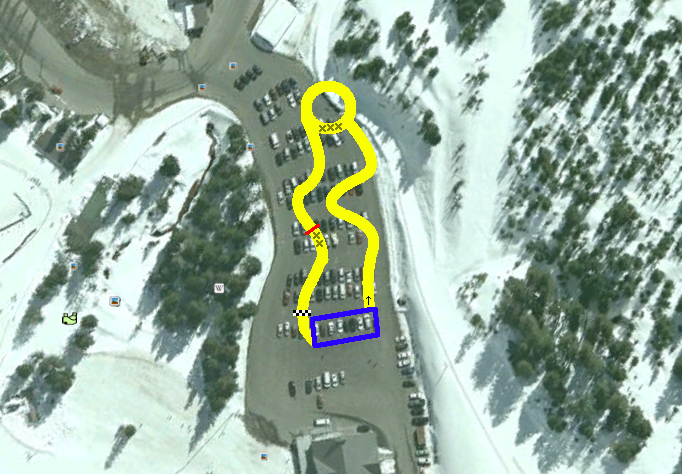 The first track was meant to show off the capabilities of the All-Wheel Drive systems. Take one of the cars to the start, give it full gas, navigate the first slalom, and run directly into the roundabout. 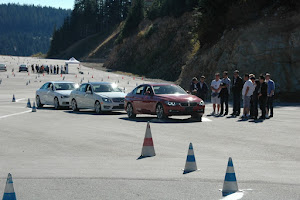 Do one full circle through the sand trap without lifting off – where the point was to get them to slide out from under you, which they did – and then power into the second slalom, which ends with a very short straightaway followed by an emergency full-stop on sand.

Here, the 328i xDrive was compared with the Audi A4 S-Line quattro and the Mercedes-Benz C300 4Matic.

But before we were let loose on the track, there was a demonstration to see: they put each of the three on rollers to show how the AWD system gets them out of zero-traction situations. 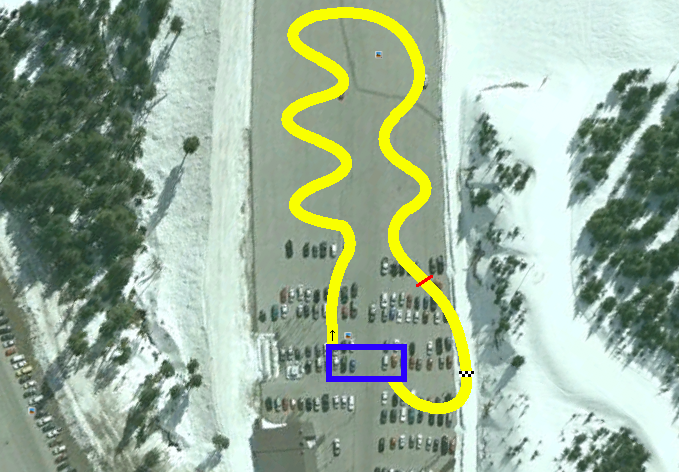 The second track emphasized power. Take one of them up to the start line, gun it through a longer slalom, and power through the long curve. Then run through another long slalom and floor the accelerator at the still-short straightaway before you end with another emergency full-stop.

This is not as easy as it sounds! This track had the most powerful cars of the event: the 335i xDrive, Infiniti G37x, and Acura TL SH-AWD. They can get up to speed quickly – hence, it's no boring task keeping them in line when you do a sharp turn every few seconds at full speed.


* * * * * * * * *
Based exclusively on the GPS between my ears – as before, you can't be bothered with looking down at the speed, not even with a Heads-Up Display – our average speed through the track was around 50 km/h.

So how did the cars do? I'll get there...but first, some housekeeping.

This time around, there was much less auxiliary staff (the event is better for it), and most of those that remained were German...much more authentic than Langley-grown locals. BMW apparently also bought the competition's cars themselves. 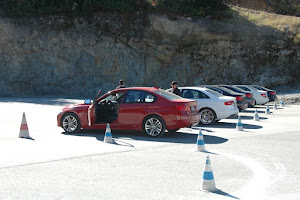 The race car drivers also elaborated about the perfect seating position and how important it is, but then proceeded to not give us nearly enough time to apply this before getting on a performance track!

This is that same demon from before: all the demonstrations and presentations were nice and relaxed, but then, when the time came for us to try things ourselves, we were basically herded like cattle.

"Go there! Get in this car! Now get out! Get in this one instead! Put that seatbelt on faster! Shouldn't you have adjusted the seat and steering wheel already, even though the last guy that drove was half your size!? Let's go, this event isn't gonna finish itself!"

Nobody says any of this, but that's exactly how you feel when you aren't driving. Not as bad as last time, but still not there yet.

Now, given my diploma in Business Admin, I do understand how these things work. I'm aware that there are huge costs, huge liabilities, huge logistics, and huge amounts of people to please – which is why I appreciate the event and the effort to both make it exist, and make it absolutely free of charge.

Plus, I very much enjoyed my morning.

However, one thing they constantly repeat in business school is that you absolutely cannot lose touch with what it's like to be in the customer's shoes. No matter how valiant your effort, if the guy is turned off by your approach, the Annoying Audi Slimy Salesman (or, Annoying A.S.S., for short) gets the spoils.

This is not good. 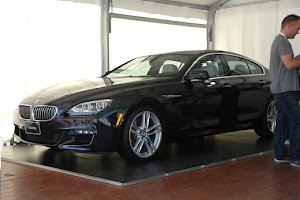 Something has to be done to please this part of BMW's target market: those that want to actually learn something about their products and how they work; those that are capable of getting something out of a track event; those that didn't just come to leech off of BMW's balance sheet.

I think I have the solution.

This same event should still exist, but there should be an upgrade option for those that can see over the steering wheel. We, serious potential BMW customers who value more than the badge, should be allowed to pay a token fee for the same event, but where there are half as many people in a given group; where we are actually given time to adjust our driving positions properly; where we get more track time and the chance for each of us to try each car there.

It would be wonderful. There would be no needless stress the instant you enter a car or park one. There would be no oblivious guy who shuts off every single car before switching to the next one, who pulls the e-brake on all of them, warping the brake rotors in the process. We could even do the hot lap at the beginning instead...

Hold on a second. Maybe there is no need to price oblivious man out. It can be simpler: make the cars for this group all manual transmission.