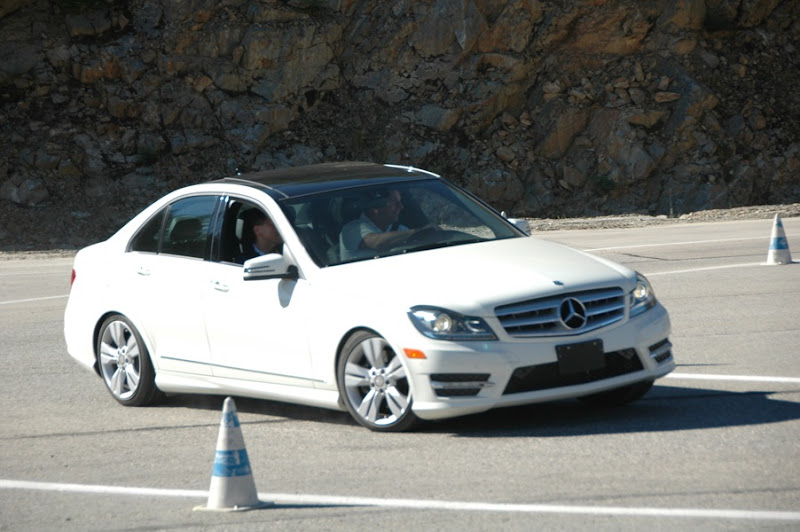 What else could possibly come to mind first when you think of the automobile?

Mercedes-Benz: the inventor of the automobile; the black-painted ambassador of dictators; synonym of quality, solidity, post-apocalyptic reliability, and badge prestige; the imported pride of Albania... The list goes on and on.

Vehicles with the three-pointed star are coveted by practically everyone, having verified their bank-vault-like reputation with a matching solid history. Nobody, ever, will laugh at you for showing up in a Mercedes. They'll laugh at you when they see the crocodile-skin shoes you're wearing.

But I digress. I'm here to talk about the Benz in a certain context, as BMW's historic rival from Stuttgart.

In particular, I drove the C300, the C-class range's middle child. It brings a three-liter V6 to the party, competing with the Audi and BMW's two-liter turbo four-cylinder engines.

Seems like overkill? It isn't, really. This engine's not that powerful: its relatively large displacement breeds only 228 Holsteiners, right in between the other two Germans available on the first track.

But the Holsteiners don't matter, as both of the latter two are faster by a second or two, and it showed on the track. 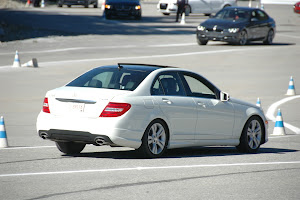 So it's down on power, but there's a catch: this is the 2012 model. The 2013 C300 gets a completely different, much more powerful engine, which is actually competitive on paper.

In the style of the sales presentation, the 2013 has 20 more horses, 30 more 'torques', 17% better fuel economy, standard start-stop (the engine shuts off when you're stationary and automatically starts up when you take your foot off the brake), and it's 0.2 seconds faster to 100km/h.

The problem is, 2013's new engine wouldn't make a difference: it would still be, as near as makes no difference, just as slow as the tested 2012. So the Audi and BMW would out-accelerate the Mercedes just the same.

The C-class was also out-handled, despite its good steering feedback. While its wonderfully-trimmed interior, competitive tech features, comfortable seats, solid build quality, and elegant design are strong positive points, its track performance was not. It reached its limit far before the Audi or BMW, and as a result, couldn't complete the course as fast as the Audi, nor with nearly as much composure. Not to mention the BMW...

The foot-operated e-brake should have been a warning sign.

I used to be puzzled and disappointed that the C-class didn't offer a manual transmission. Now that I've driven one, I realize this is completely appropriate. 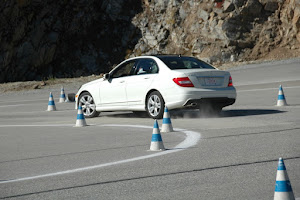 Unfortunately, the rest of the event wasn't kind to the Mercedes. On the roundabout, there was a sand trap: we were told to power through it as if there was no sand there, to test how well the cars' all-wheel drive systems would cope (which is why they exist in the first place).

So that's exactly what I did, and the Benz, despite power at all four wheels, started to understeer over the slippery stuff much more than the other two. It basically felt like there was no AWD at all.

This means that it couldn't have fared well on the rollers, right? Well, yeah...

4Matic boasts a permanent 45:55 (front:rear, in percent) power distribution – it cuts power and brakes the wheels that have no traction, instead of bringing more power to the wheels that do. This, in turn, allows the system to be embarrassed by a simple set of rollers at a BMW driving event. Or a snowy uphill. 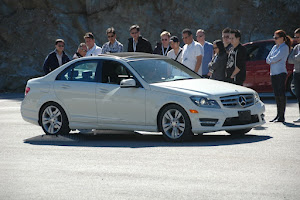 After some effort, the Benz eventually pushed its front wheels off the rollers. But then they drove the rear wheels onto them...the race car driver pressed the gas. Nothing. Then he pressed it some more. Still nothing.

Then he floored it. Still nothing: the rear wheels kept spinning in place while the fronts did nothing at all.

Notice how the rear end is squatted down in the picture just above: that's because the skinny pedal is to the floor! (the camera doesn't show wheelspin) Another race car driver gave the C-class a push, finally allowing it to free itself from zero traction.

Perhaps this sounds like they set the C-class up? Well, this didn't happen to the Audi or the BMW...

So, forget all-wheel drive along with any fun-to-drive aspirations, and you'll be pretty happy with a Mercedes. Kind of disappointing from the inventors of the automobile, to be honest. But at least they still do what they initially became famous for.